In December 1990, the former priest Jean-Bertrand Aristide was elected President in the Haitian general election, winning by more than two thirds of the vote.

His 5 year mandate began on 7 February 1991. In August 1991, Jean-Bertrand Aristide's government faced a non-confidence vote within the Haitian Chamber of Deputies and Senate. Eighty three voted against him, while only eleven members voted in support of Aristide's government. Following a coup d' état in September 1991, President Aristide was flown into exile. In accordance with Article 149 of Haiti's Constitution of 1987, Supreme Court Justice Joseph Nerette was named Provisional President and elections were called for December 1991 – elections which were blocked by the international community – and the resulting chaos extended into 1994.

In 1994, Haitian General Raoul Cédras asked former U.S. President Jimmy Carter to help avoid a U.S. military invasion of Haiti. President Carter relayed this information to President Clinton, who asked Carter, in his role as founder of The Carter Center, to undertake a mission to Haiti with Senator Sam Nunn, D-GA, and former Joint Chiefs of Staff Chairman Colin Powell. The team successfully negotiated the departure of Haiti's military leaders and the peaceful entry of U.S. forces under Operation Uphold Democracy, thereby paving the way for the restoration of Jean-Bertrand Aristide as president. In October 1994, Aristide returned to Haiti to complete his term in office. Aristide disbanded the Haitian army, and established a civilian police force. Aristide vacated the presidency in February 1996, which had been the scheduled end of his 5 year term based on the date of his inauguration.

In 1996, René Préval was elected as president for a five-year term, winning 88% of the popular vote. Préval had previously served as Aristide's Prime Minister from February to October 1991.

The United States responded with Operation UPHOLD DEMOCRACY, the movement of forces to Haiti to support the return of Haitian democracy. The U.S.-led Multinational Force for Haiti (MNF) began on September 19, 1994 with the approval of the Security Council, which, at the same time, approved the follow-on U.N. operation.

The American road back to Haiti began in early 1994 at Fort Bragg, North Carolina; Fort Eustis, Virginia; and Camp LeJeune, North Carolina. At these installations, during the XVIII Airborne Corps' Super Thrust I and Super Thrust II exercises in April and June 1994, units formed a concept of operations for Haiti. These exercises laid a framework for synchronizing critical operations tasks. The US began planning for Operation Uphold Democracy in August 1994. The group had to simultaneously plan for two contingencies: a permissive entry in Haiti (Operation Uphold Democracy) or a forced entry (Operation Restore Democracy). Crisis action planning for Operation Restore Democracy stopped when former President Jimmy Carter's negotiations with Haiti's General Raoul Cedras proved successful. 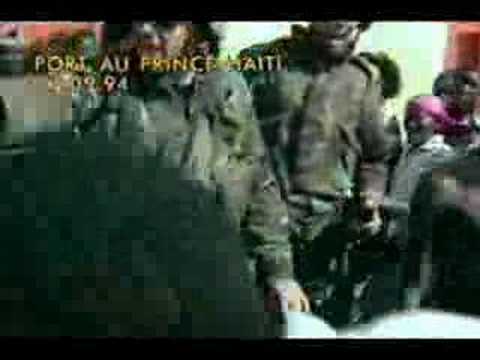