The Canucks were making the club's second Final appearance, their first coming during their Cinderella run of 1982, and the Rangers were making their tenth appearance, their first since 1979. The Rangers ended their record 54-year championship drought with a victory in Game 7 to claim the long-awaited Stanley Cup. It was the fourth championship in franchise history, which was also the last great moment for the Edmonton Oilers dynasty of the 1980's.

The Canucks entered the playoffs seeded #7 in the Western Conference, and overcame a 3–1 deficit against the Calgary Flames, winning the final three games in overtime with Game 7 ending in double overtime as Pavel Bure scored the winning goal on a breakaway to upset the Flames. They then upset the Dallas Stars, seeded #4 and the Toronto Maple Leafs, seeded #3, in five games each to capture the Western Conference title.
The Rangers swept the New York Islanders and then beat the Washington Capitals in five games, before falling behind 3 games to 2 in the Eastern Conference Finals against the New Jersey Devils. They then won game six by a 4–2 score after Mark Messier publicly guaranteed a victory and then scored a third period hat trick. The Rangers then won game seven 2–1 on Stéphane Matteau's goal in double overtime, prompting the call of "Matteau, Matteau, Matteau!" by Rangers radio announcer Howie Rose which became drilled into the memories of Ranger fans. It was Matteau's second double overtime goal of the series.

This series brought together two assistant coaches who were teammates on the other Canucks team to reach the Finals, Rangers assistant coach Colin Campbell and Canucks assistant coach Stan Smyl, who served as team captain then, as Kevin McCarthy was injured.
It was the second straight Finals that featured a former Edmonton Oilers captain trying to become the first person to capture a Stanley Cup as captain on two different teams. The previous year, Wayne Gretzky, who captained the Oilers to the first four of their five Stanley Cups in the 1980s, captained the Los Angeles Kings to the finals. Here, it was Mark Messier of the Rangers, who captained the Oilers to the last of their five, in 1990.

The waiting is over! The New York Rangers are the Stanley Cup champions! And this one will last a lifetime!

Rangers captain Mark Messier lifts the Stanley Cup after the Blueshirts ended their 54-year wait on June 14, 1994. No doubt every Rangers fan has heard those famous words uttered by the team’s play-by-play voice Sam Rosen. But his words, as well as the thousands upon thousands written and spoken in the immediate aftermath and the 15 years since, can never quite capture the exact feeling of what surged through the hearts and minds of Rangers fans when their beloved team finally captured the Stanley Cup on June 14, 1994.

Perhaps the sign held by a fan at Madison Square Garden that night, which read “Now I Can Die in Peace”, best explained how the fans felt when 53 years of heartbreak melted away into one glorious moment.

Really, all you had to do that night was look around The Garden to understand what truly had just taken place. Grandfathers hugging their sons and grandsons. Strangers enveloped in embrace with other strangers. Fans spilling into the press box on top of the reporters. Free-flowing tears of joy, of remembering past failures, near-misses, and close-calls, that now were not as painful because the Cup was finally back home at The Garden.

Simply put, the "Messiah" delivered. New York Ranger captain and 15-year veteran Mark Messier won his sixth Stanley Cup and ended the Rangers' 54-year Cup drought. Many players were key in the success of the Rangers including Norris Trophy winner Brian Leetch, goaltender Mike Richter, and former Edmonton Oilers stars Glenn Anderson, Esa Tikkanen and Craig MacTavish. It was Messier who stepped up to the challenge when the New York Rangers faced defeat at the hands of the mighty New Jersey Devils in the Conference Finals. Mark told the press that he would deliver, and remarkably he did. With three games going into double overtime, Messier and Co. prevailed in seven games. The Rangers repeated the feat by beating the Vancouver Canucks in the Stanley Cup Finals in seven games. Leetch was awarded the Conn Smythe Trophy after posting a league-best 34 points. 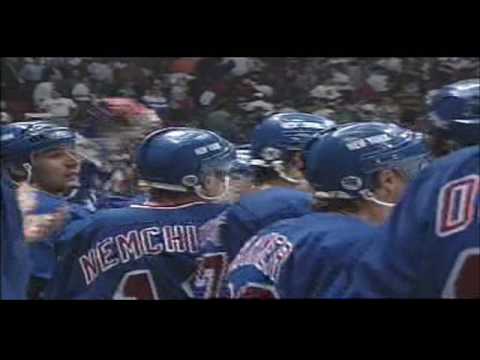