South Africa's first multi-racial elections in which full enfranchisement was granted were held on 27 April 1994.

The ANC won 62% of the votes in the election, and Mandela, as leader of the ANC, was inaugurated on 10 May 1994 as the country's first black President, with the National Party's de Klerk as his first deputy and Thabo Mbeki as the second in the Government of National Unity.[71] As President from May 1994 until June 1999, Mandela presided over the transition from minority rule and apartheid, winning international respect for his advocacy of national and international reconciliation.[72] Mandela encouraged black South Africans to get behind the previously hated Springboks (the South African national rugby team) as South Africa hosted the 1995 Rugby World Cup.[73] After the Springboks won an epic final over New Zealand, Mandela presented the trophy to captain Francois Pienaar, an Afrikaner, wearing a Springbok shirt with Pienaar's own number 6 on the back. This was widely seen as a major step in the reconciliation of white and black South Africans.[74]
After assuming the presidency, one of Mandela's trademarks was his use of Batik shirts, known as "Madiba shirts", even on formal occasions.[75] In South Africa's first post-apartheid military operation, Mandela ordered troops into Lesotho in September 1998 to protect the government of Prime Minister Pakalitha Mosisili. This came after a disputed election prompted fierce opposition threatening the unstable government.[76] Commentators and critics including AIDS activists such as Edwin Cameron have criticised Mandela for his government's ineffectiveness in stemming the AIDS crisis.[77][78] After his retirement, Mandela admitted that he may have failed his country by not paying more attention to the HIV/AIDS epidemic.[79][80] Mandela has since spoken out on several occasions against the AIDS epidemic.

On this day in 1994 newly elected President of South Africa Nelson Mandela and the African National Congress announced victory in the nation's first democratic all race elections, ending decades of white dominated rule.

South Africans had been living under the apartheid system which separated life for black and white people since the election of hardline nationalists in 1948.

For Mandela abolishing apartheid, establishing universal suffrage and holding free democratic elections had been a life long goal which he received the Nobel Peace Prize, in conjunction with National Party President FW de Klerk, in 1993.

The win is also more impressive as Mandela had only been release from prison four years before, where he had been serving a life sentence for inciting armed revolution against white dominated rule in 1964. 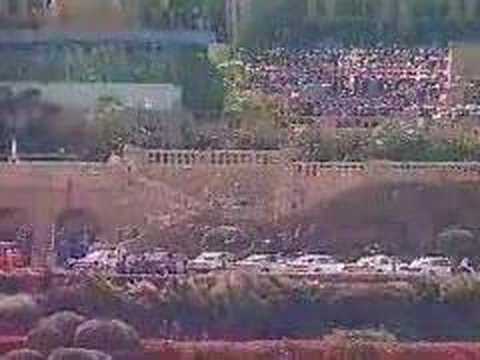 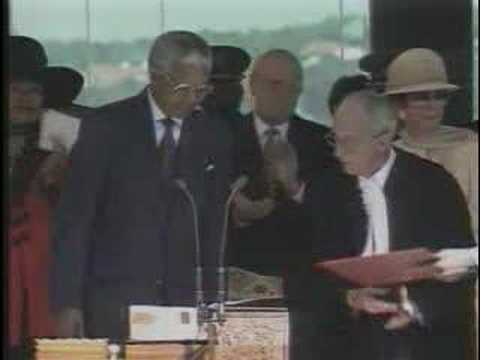