Rashaan is the University of Colorado's first ever Heisman Trophy winner.

Salaam joins fellow Heisman Trophy winners: Marcus Allen, Mike Rozier and Barry Sanders as the only Division I players to gain more than 2,000 rushing yards in a season. Some of Salaam's accomplishments include rushing for 165 yards against Michigan in Michigan Stadium before in action. The following week, against the Texas Longhorns, Salaam ran for 312 yards. Salaam led the Buffaloes to an 11-1 season, which was capped by a three-touchdown performance in the 1995 Fiesta Bowl victory over Notre Dame, 41-24. Always humble and never egotistical, Salaam would always acknowledge the importance of his teammates, especially his offensive line. "Without my offensive lineman," he says, "I would not have been honored with the greatest award in amateur athletics." As a junior, Salaam was a unanimous All-America selection and led the nation in rushing (186.8 yards per game). Salaam was selected by the Chicago Bears in the first round of the 1995 NFL draft with the 21st overall pick.

Rashaan Salaam became the first player from the University of Colorado to win the Heisman. There wre 920 ballots mailed out, Salaam captured all six sections.

Rashaan Iman Salaam (born October 8, 1974 in La Jolla, California) is a former professional American football player. Salaam won the 1994 Heisman Trophy as a running back for the University of Colorado, rushing for 2,055 yards by the end of the season. Salaam is the fourth major college football player to rush for over 2,000 yards in a season. A high school All-American running back from San Diego (La Jolla Country Day), Salaam's success at Colorado led to his selection as the Chicago Bears’ first-round draft pick in the 1995 NFL Draft.

As a junior, Salaam had one of the best individual seasons by a running back in college football history in 1994, rushing for a school-record 2,055 yards and 24 touchdowns and leading Colorado to an 11-1 record, including a 41-24 win over Notre Dame in the 1995 Fiesta Bowl, and a No. 3 finish in the final Associated Press poll. The Buffaloes' only loss on the season was at the hands of Big Eight rival Nebraska, which would finish undefeated and No. 1 in both the AP and United Press International polls at year's end. Salaam had four consecutive 200-yard rushing games during the season, his best effort coming against Texas, when he set a school record with 362 yards total offense in a 34-31 Colorado win in Austin. He was a unanimous all-American and became the school's first Heisman Trophy winner in December, besting runner-up Ki-Jana Carter of Penn State by 842 points. Though he had been little-known prior to the 1994 season, Salaam left school for the 1995 NFL Draft with a year of eligibility remaining.

Colorado’s Rashaan Salaam reacted to winning the Heisman Trophy Saturday night much in the same way he plays football.

The junior running back from San Diego, CU’s first winner in the 60-year history of college football’s most prestigious award, used a no-nonsense running style to carry him to 2,055 yards this season.

And in claiming the 60th Heisman presented by the Downtown Athletic Club, Salaam said, “I’m happy, but it’s not a really big deal for me.”

In Fact, Salaam insisted the Heisman was no more important than the Walter Camp player of the Year and Doak Walker Award as the nation’s best running back, both of which he had won earlier.

“It feels good, but it’s not just an award” Salaam said. “No more, no less. They’re all even. They’re a piece of wood and brass to me.”

“Not at all,” he said. “I’m not going to take this and make my whole life turn around.”

He seemed to be happier for the people around him.

“I’m excited for the whole program, especially for my teammates,” he said. Not to mention his biggest fan, his mother, Khalada Salaam, one of many relatives who attended the ceremonies. “She’s choked up; this trophy is for her,” he said.

If Salaam wasn’t excited about all the hoopla, his friends and family were.

Khalada Salaam admitted she was more nervous than Rashaan prior to the presentation, which was telecast live from the Heisman Room at the DAC on ESPN.

“He doesn’t want the Heisman jinx. I want him to have a career like Marcus Allen, not be a flash in the pan.”

Whether winning the Heisman marks the end of his college career or the start of one in the NFL remains to be seen.

Salaam said Saturday night he has decided, but won’t make an announcement until Jan. 6, four days after Colorado plays Notre Dame in the Fiesta Bowl. 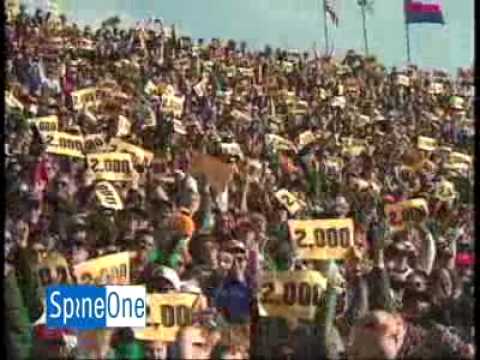