The Altima (pronounced /ˈɔːltɨmə/) is a mid-size car (originally a compact car) manufactured by Japanese automaker Nissan, and is arguably a continuation of the Nissan Bluebird line, which began in 1957.

It has historically been larger, more powerful, and more luxurious than the Nissan Sentra but less so than the Nissan Maxima. The Altima is available in North America as well as the Middle East. In other markets, Nissan sells a related mid-size sedan called the Nissan Teana, built on the same FF-L platform used by the 2002–2006 Nissan Altima.

The name "Altima" originally referred to a trim line of the Nissan Laurel mid-size car sold in the Caribbean before 1992. In 1993, Nissan discontinued its much-criticized Stanza, replacing it with the US-made Altima, while remaining a compact car. The very first Altima rolled off the assembly line on June 15, 1992, as a 1993 model. All Altimas had been built in Smyrna, Tennessee, until June 2004, when Nissan's Canton, Mississippi, plant began producing additional Altimas to meet high demand.

Like the Stanza before it, the original Altima was based on the Nissan Bluebird SSS (Chassis Model U13), though its original styling hailed from Nissan's California design studio. Initially, the car's official name was "Stanza Altima," which appears on the early owners manuals. 1993 models can be seen with a sticker reading "Stanza" in small lettering to the left of the ALTIMA emblem on the trunk lid.

All Altima models used Nissan's 150 hp (112 kW) KA24DE I4 DOHC engine mated to a 5-speed manual or 4-speed automatic, which provided the fastest performance among all 4-cylinder competitors (10.4 seconds to 60 mph (100 km/h) with automatic,8.4 with manual). (By contrast, the Japanese Bluebird SSS could be had with Nissan's SR20DET engine and all-wheel-drive.) Suspension was composed of struts with stabilizer bars at both ends and was noted for providing sporty, satisfying handling (plus a firm ride and moderate road noise); all wheels were 15-inches. Being one of the bigger compact cars, the Altima could seat four adults fairly comfortably, though its body was too skinny for five. Trim lines consisted of the stripped XE, mid-line GXE, sporty SE, and luxury GLE. Some options included a gold emblem package, molded mud guards, and a pin stripe. All models had small cupholders under the radio and a small glovebox which were improved in the 1998 redesign.

The base XE (rare) had manual windows. The mid-line GXE had power windows, a power retracting antenna, pass thru rear armrest, digital clock in dash, and color matched plastic speaker grilles for the rear 6 inch speakers. The XE and GXE models only had the fixed intermittent wiper switch.

In addition to the GXE features, the SE had a stiffer suspension, fog lights, 3 leg mount rear spoiler (1993 models with a clear LED brake light), side skirts (no upper side moldings), and sport seats (plus a standard sunroof in 1994–1995). It also had 4-wheel disc brakes, which came on the other trim lines when antilock brakes were ordered.
The GLE's enhancements included a digital head-up display (1993 and 1994 only), which displayed speed in mph or km/h, turn signals, and various warning lights on a unique mirrored patch made into the windshield. The 1989 to 1994 Maxima and 240SX had similar technology but only showed speed. Other features included a coin holder built into the fuse panel cover(1993 and 1994 only), adjustable lumbar support on the front seats, automatic digital climate control, keyless entry with alarm(optional), floor mats, color matched side mirrors, cornering lights, sunroof, and a higher-powered six-speaker cassette/CD stereo which included 6X9 rear speakers with black metal "active speaker" grilles, metal color matched "active speaker" grilles for the front door speakers(1993 and 1994 only), and a pair of A pillar tweeters all powered by 2 factory amps mounted underneath the rear deck. For 1997 it gave up all of the above in exchange for standard leather (previously optional). All SE and GLE models had alloy wheels and variable intermittent wipers.

1993 Altimas came with a rosewood colored dash trim and only had a driver's side airbag coupled with automatic shoulder belts(the center console was slimmer to accommodate the lap belts). The 1994 Altima gained a darker burl wood dash trim, a flush mount passenger airbag and normal seatbelts. 1993 and 1994 models came with chrome inner door handles standard with an auto door lock/unlock feature on the passenger side, in 1995, the inner door handles were changed to color matched plastic and a plug replaced where the passenger auto door lock/unlock feature was. 1993 and 1994 models also had a slim 1½ armrest lid, however, if an optional leather armrest was selected, it brought the height up to about 4.5 inches (110 mm). In 1995, all the armrest lids were thicker and about 4.5 inches (110 mm) tall. 1995 also brought a new venetian blind-like grille, new taillights (red and clear), and a new 2 leg mount spoiler with a red LED brake light for the SE. Some other changes included the removal of the rear speaker grilles for a flat rear deck, a cheaper cloth interior, a raised mount passenger airbag, a plastic cover replacing the rear ashtray, and the digital in dash clock was now optional. 1996 brought new wheel covers for base models. In 1997 the GXE gained a new "Limited Edition" package including alloy wheels, keyless entry, alarm, floor mats, and a Limited Edition sticker on each side near the front wheels. The majority of final-year Altima models were dubbed "1997.5" models, signifying the added crash protection necessary to meet 1997 side-impact standards.

For 1993, Nissan replaced the Stanza with the Altima. The major improvement over the Stanza was an extra inch of rear leg room and head room. The compact Altima was offered in four versions: base, step-up GXE, sporty SE, and deluxe GLE. The only available engine was a revamped version of the Stanza's 2.4-liter twin-cam 4-cylinder. When installed in the Altima, it provided 150 horsepower. A 5-speed manual was standard on all models except the flagship GLE version, which came standard with the 4-speed automatic that was optional on the three lower trim levels. A driver-side airbag came standard and when optional antilock brakes were ordered, rear disc brakes replaced the standard rear drums.

The Nissan Altima has been on sale for more than 15 years and has now settled into the rare role of a practical five-passenger family sedan with handling and performance that appeals to the enthusiast. There have been four generations of Altimas, with the newest one introduced in 2007 and on sale now. The sedan has more recently been aimed at traditional segment leaders, and as such it has quickly matured in terms of features, finesse and power.

Family sedans have never been more capable across the board than they are today, and competition in this segment is consequently fiercer than ever. Yet the current Nissan Altima manages to distinguish itself by offering ample yet refined power, especially with the optional V6, along with perhaps the sportiest handling of any family sedan. It also boasts a pleasant interior that's leaps and bounds ahead of its low-grade predecessors. The addition of a coupe model should broaden the Altima's appeal and make it even more competitive with the Accord and Camry, which have long offered coupe variants. Families -- or really anyone -- in search of practical yet lively daily transportation should give the Altima a hard look.

The Nissan Altima provides the kind of style and performance one would have expected years ago from its now-big brother, the Maxima sedan. In recent years, strong styling has been one of Nissan's characteristics, and the Altima's svelte sheet metal continues this trend. The Altima impresses under the hood as well, with zesty acceleration from the base 2.5-liter engine and downright prodigious thrust from the optional 3.5-liter V6. (A limited-production four-cylinder hybrid model with Toyota-sourced technology is also available in some states.) Transmission choices are a six-speed manual or a continuously variable automatic transmission (CVT). The latter is one of the best examples of its breed; the former, however, is to be avoided unless you absolutely must shift your own gears, as its rubbery feel and remarkably imprecise throws are only fit for the most automatic-averse consumers.

In reviews of the current-generation Altima, we've mostly praised the power and handling of both the four-cylinder and V6 models, although the enthusiast-oriented SE model's sport-tuned suspension can be a little stiff on rough surfaces. We clocked a CVT-equipped Altima SE V6 from zero to 60 mph in just 6.6 seconds, an excellent showing for a family sedan -- and one that might make the decision to go without a manual shifter a little easier. Meanwhile, the base car with the 2.5-liter four-cylinder performs well enough that it will probably make some consumers think twice about whether a V6 is necessary.

Underneath that sleek skin, the Nissan Altima's overall length has been reduced about 2 inches as compared to the previous model, which has resulted in slightly less front and rear legroom. In the sedan, there's still enough room for four 6-foot adults to be carried in reasonable comfort, at least for a moderate distance, but legroom is just average, and headroom is tight. The interior layout, however, is much improved over the previous-generation Altima and is now near the head of the family sedan class in terms of both design and material quality.

The Altima coupe drives much like the sedan, as one might expect, but it adds unique styling, sportier suspension tuning and more aggressively bolstered seats. Its dimensions are also down a bit from the sedan's -- combined with the coupe's rakish roof line, this means markedly less passenger room for coupe buyers, though it's still a good bit roomier than dedicated sport coupes.

One thing to consider is pricing. While the least expensive Altima starts at just under $20,000, a desire for V6 power and a free hand with the options list could leave you with a price tag of $30,000 or more for a new Altima. At that price point, one could also start considering some purpose-built sport sedans from more prestigious luxury automakers.

The current- (fourth) generation Nissan Altima debuted in 2007, with the Coupe following in 2008. In the time since, the Altima line has seen only minor changes to standard and optional feature structures.

The current- and third-generation Nissan Altimas are the most desirable from a used-car shopper's perspective. The 2002-'06 model was about 6 inches longer and had a new suspension and stronger body compared to the previous car. At the time, it was one of the most powerful family sedans available, as it came with either a 175-horsepower 2.5-liter four-cylinder engine or a 240-hp 3.5-liter V6. All models were offered with either a manual or automatic transmission.

The interior was widely criticized for looking cheap but the Altima had a particularly lively feel for a front-wheel-drive family sedan. Our editors concluded that the Altima had gone from wallflower to genuinely desirable sedan overnight. For the serious driving enthusiast, the 2005-'06 Altima SE-R was the way to go. This specialized model came with a firmer suspension, a bit more power and an exclusive six-speed manual transmission whose slick operation was a cut above Nissan's norm.

It took awhile for the Nissan Altima family sedan, introduced in 1993, to establish itself in the marketplace and the hearts of enthusiasts. The first two generations, powered by a relatively peppy 150-hp 2.4-liter four-cylinder engine, weren't flops -- but neither were they the blockbusters Nissan was hoping for. We found the second-generation Altima, which was sold for the 1998-2001 model years, to be a decent handler but too bland in its overall design. 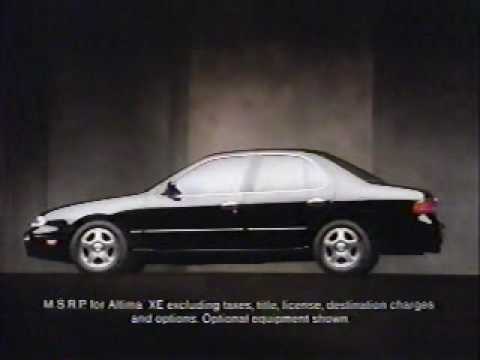