The 1993 Stanley Cup Final NHL championship series was contested by the Los Angeles Kings and the Montreal Canadiens to decide the NHL championship.It was the Kings' first appearance in the Final, the 34th for Montreal, and their first since the 1989 Final. The Canadiens won the series 4-1 to win the team's twenty-fourth Stanley Cup. 1993 was the 100th anniversary of the first awarding of the Stanley Cup. To date, the Canadiens remain the last Canadian team to have won the Cup.

To reach the final, Los Angeles defeated the Calgary Flames 4–2, the Vancouver Canucks 4–2 and the Toronto Maple Leafs 4–3.
Montreal defeated the Quebec Nordiques 4–2, the Buffalo Sabres 4–0, and the New York Islanders 4–1.

This would be the last Stanley Cup Final series to be played in the Montreal Forum, and the last time Wayne Gretzky would play in the Final as well, as he tried to become the first Stanley Cup captain on two teams, having captained the Edmonton Oilers to Stanley Cups in 1984, 1985, 1987, and 1988. It was Montreal's first trip to the finals in four years, while it was the first-ever trip to the finals for the Kings in their 26-year history. As of 2009, this is the most recent time that a Canadian team has won the Stanley Cup Championship. It is also (to date) the last time the Canadiens have advanced to the Stanley Cup Final.

Game one
Tuesday, June 1 Montreal Canadiens 1 – 4 Los Angeles Kings Montreal Forum
In game one at the Montreal Forum, the Kings jumped out to a 1–0 lead on Luc Robitaille's power-play goal at 3:03 of the first period. The Canadiens tied the game late in the first, on Ed Ronan's goal at 18:09 (although it was merely a pass that Wayne Gretzky accidentally deflected in). Robitaille would break the 1–1 tie with his second power-play goal of the game at 17:41 of the second period. Jari Kurri added an insurance marker off a Patrice Brisebois turnover at 1:51 of the third, and Gretzky sealed the 4–1 win for the Kings with an empty net goal at 18:02.

Game two
Thursday, June 3 Montreal Canadiens 3 – 2 OT Los Angeles Kings Montreal Forum
The most memorable moment of the series came late in the third period of game two. With the Kings leading by a score of 2–1, Canadiens coach Jacques Demers called for a measurement of the curve of Kings defenceman Marty McSorley's stick. The stick was deemed illegal and McSorley was given a two-minute minor for unsportsmanlike conduct. As it was late in the game and Montreal was facing the prospect of going to LA down two games to zero, Jacques Demers pulled goalie Patrick Roy for a 6 on 4 advantage. In dramatic fashion, Montreal's Éric Desjardins scored from the point to tie the game at 2 and force overtime. Desjardins then scored his third goal (the first defenceman to score a hat trick in a cup final) of the game 51 seconds into overtime to give Montreal the win and the momentum heading toward games three and four at the Great Western Forum.
See also: Sports-related_curses#Curse_of_Marty_McSorley

Game three
Saturday, June 5 Los Angeles Kings 3 – 4 OT Montreal Canadiens Great Western Forum
In game three in Los Angeles, the Canadiens jumped out to a 1–0 first period lead on a tip-in goal by Brian Bellows at 10:26, and Gilbert Dionne and Mathieu Schneider increased that lead to 3–0 at 2:41 and 3:02 of the second period. After a memorable check by Kings long-time defenceman Mark Hardy on Montreal's Mike Keane, the Kings fired back to tie the game in the second period. Luc Robitaille, Tony Granato and Wayne Gretzky all had goals to make the score 3–3. With time running out in the third period, Montreal captain Guy Carbonneau appeared to cover the puck in the goal crease, which with such little time remaining (12 seconds) would have resulted in a penalty shot for Los Angeles. But the referee ruled that the puck had been shot by a Kings player into Carbonneau's equipment, and so the period remained scoreless. The game went into overtime and the Canadiens won again; it was their ninth consecutive overtime playoff victory. John LeClair scored the winner just 34 seconds into the extra period.

Game four
Monday, June 7 Los Angeles Kings 2 – 3 OT Montreal Canadiens Great Western Forum
Game four was a carbon copy of the previous game. Montreal bolted out to an early 2–0 lead, but the Kings fought back in the second period with goals by Mike Donnelly at 6:33 and Marty McSorley on a power play at 19:56. As was the case in game three, the third period in game four ended up scoreless. Once again, it was John LeClair who was the hero for Montreal as he netted the overtime winner 14:37 into the extra period, banking the puck off sliding defenceman Darryl Sydor's leg. In doing so, he became the first player since Montreal legend Maurice "Rocket" Richard in 1951 to score playoff overtime goals in consecutive games, and giving Montreal an NHL-record ten consecutive OT wins in the 1993 playoffs.

Game five
Wednesday, June 9 Montreal Canadiens 4 – 1 Los Angeles Kings Montreal Forum
Leading the series three games to one, the Canadiens headed back to the Forum for game five. After Paul DiPietro gave Montreal a 1–0 lead with a goal at 15:10 of the first period, Los Angeles defenceman Marty McSorley tied the game at 2:40 of the second period. The Canadiens' response was swift as Kirk Muller scored just 71 seconds later and then Stéphan Lebeau scored a power-play goal at 11:31, to give the Canadiens a 3–1 lead after two periods. Paul DiPietro scored again at 12:06 to give Montreal a 4–1 lead. That ended up being the final score, and Kirk Muller's goal turned out to be the game winner. The Canadiens won the Stanley Cup Finals four games to one. Patrick Roy was awarded his second Conn Smythe Trophy as Playoff MVP. The Canadiens winning denied Wayne Gretzky from becoming the first Stanley Cup captain on two teams. But, his former teammate Mark Messier, would achieve this feat the following year, when he led the New York Rangers to their first Stanley Cup title since 1940.

It took an NHL record 10 overtime wins but the Montreal Canadiens prevailed winning their 24th Stanley Cup. This win gave the city of Montreal a Stanley Cup in every decade going back to the late 19th Century when the Cup was first awarded. Goaltender Patrick Roy became the fifth player in NHL history to capture the Conn Smythe Trophy, also having won it in 1986. He played very well losing but four games over four series. After defeating Quebec, Buffalo, and the New York Islanders, Montreal came up against Wayne Gretzky and the Los Angeles Kings. Hockey was hitting a feverish pitch in the west and Gretzky, as in the past, was the playoff scoring leader. Los Angeles opened the series with a 4-1 win at the Montreal Forum. But the Canadiens bounced back winning three straight overtime games and then taking home the Stanley Cup with a 4-1 win of their own at home. This would be the last Stanley Cup appearance for Wayne Gretzky.

In the first round, the team once again faces its provincial rivals, the Nordiques, who claim home-ice advantage, having recorded two more points during the regular season.

Quebec takes full advantage of home ice and wins the first two games of the opening round. Unhappy with his performance at the outset of the series, Patrick Roy bounces back the next game and allows his team to cut the series lead with a 2-1 win in overtime. It is the first of 10 straight overtime games the team will win in the playoffs.

The Habs never look back, posting three wins in a row to claim what will prove to be the final playoff meeting between the two teams.

There is a huge media build up for the division final between Montreal and Buffalo. For the first time, Roy and Grant Fuhr will face each other in the playoffs. The duel doesn’t disappoint as the series’ four games all end 4-3 in favor of the Habs, the last three all decided in overtime.

In the conference final, the team meets the New York Islanders, who upset Pittsburgh, defeating the reigning Stanley Cup Champions in seven games.

Montreal wins the first three games. The team’s 2-1 win in Game 3 allows the Canadiens to tie the playoff record of 11 consecutive victories, held by the Penguins and the Chicago Blackhawks. After losing the fourth game on the road, the Habs earn their ticket to the Stanley Cup Finals with a 5-2 win in Game 5 at the Forum.

In the Finals, Montreal takes on the Los Angeles Kings, who are making their first appearance in the Final, 26 years after joining the NHL. In Game 1, Luc Robitaille scores two power-play goals and helps lead the Kings to a 4-1 victory.

The second game will be forever remembered for a momentum-changing incident. With the Habs trailing 2-1 late in the third period, Demers – acting on a tip from captain Guy Carbonneau – requests that Marty McSorley’s stick be measured for an illegal curve. Referee Kerry Fraser confirms the Canadiens’ suspicions and, with McSorley sent to the penalty box, Demers pulls Roy for an extra attacker. With a two-man advantage, Eric Desjardins scores the tying goal and sends the game to overtime. Just 51 seconds into the extra frame, Desjardins completes the first hat trick by a defenseman in Stanley Cup Finals history as he beats Kelly Hrudey.

In the following game, the team explodes out of the gate to take a 3-0 lead before the Kings mount a comeback to tie the game. In overtime, Montreal once again strikes quickly as John LeClair wins it with a goal just 34 seconds into the extra frame.

The fourth game is virtually a carbon copy of Game 3. The Habs see the Kings overcome a deficit once again and the game is tied at the end of regulation. Roy makes a series of spectacular saves, including a standout stop on Tomas Sandstrom. Roy winks at Sandstrom following the save and the image is caught by a TV cameraman, a highlight that will be replayed ad inifinitum.

LeClair once again seals the Kings’ fate and becomes the first player since Maurice Richard in 1951 to score in overtime in consecutive playoff games.

The Habs avoid making the same mistake in Game 5 and hold their 4-1 lead right to the final buzzer. The Canadiens win their 24th Stanley Cup, the last at the Forum. 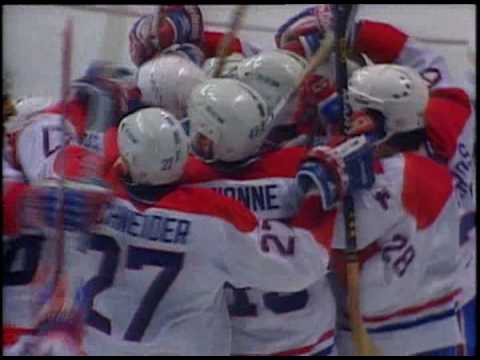 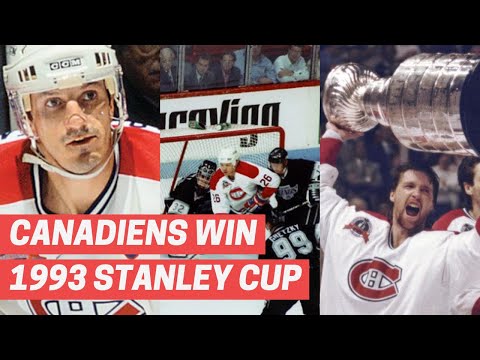