The brilliant and exciting signal-caller from Thomasville, Georgia is the first Seminole player to win the Heisman award.

From the first moment of the '93 season, the spotlight focused on Ward, who was considered to be the nation's premier quarterback and the prime candidate for the Heisman Trophy. Ward responded not only with many a marvelous performance at passing and running, but also with the kind of inspired leadership which is present in only the finest of quarterbacks. Analysts noted that the 6-foot 2 inch, 190-pound Ward did much better when lined up in the "Shotgun" formation, wherein he stood some seven yards behind center. This enabled him to get a better view of the defense and to use his phenomenal escape skills to avoid the oncoming defensive linemen. Indeed, he averaged six yards every time he ran with the ball. But it was as a passer that Ward ruined a defense, with an almost unbelievable- near 70 percent- completion average, and the ability to throw the long pass as well as the short. Even in the furiously exciting heart-stopping loss to Notre Dame at South Bend in mid-November '93, Ward still managed some 300 yards passing and came within a whisker of saving the day for the Seminoles. Charlie was drafted in 1994 by the New York Knickerbockers of the NBA, who selected him as the 26th overall pick. He is currently playing for the Houston Rockets.

Charlie Ward became the first player from Florida State to win the Heisman. With 919 ballots mailed out, Ward captured all six sections. Heath Shuler of Tennessee took second place in all six regions and David Palmer of Alabama rounded out the top three by capturing third place in the Mid-Atlantic, South and Southwest regions respectively.

Charlie Ward, Jr. (born October 12, 1970 in Thomasville, Georgia) is a three sports retired American professional NBA basketball player, college football Heisman Trophy winner, Davey O'Brien Award winner and a Major League Baseball draftee. By some sports media and publications Ward has received recognition for being one of the best all-around athletes in the last quarter century.[1] He was inducted in the College Football Hall of Fame with Emmitt Smith and Bobby Bowden in 2006.

Ward won the 1993 Heisman Trophy and Davey O'Brien Award as a quarterback for Florida State University, and subsequently led the Seminoles to their first-ever National Championship when FSU defeated Nebraska 18–16 in the 1993 Orange Bowl. The Seminoles had suffered their only defeat of the season to a second-ranked Notre Dame team, but their path to the National Championship was cleared a week later when the Irish were upset at home by Boston College. Ward holds the second-largest margin of victory in the history of Heisman trophy balloting, with a 1,622 point difference, second only to O.J. Simpson's 1,750 point win in 1968.[2] He was also the only Heisman winner to play in the NBA. In 1993, Charlie Ward won the James E. Sullivan Award from the Amateur Athletic Union (AAU) as the most outstanding amateur athlete in the United States. He was elected to the College Football Hall of Fame in 2006.
Though Ward did not play baseball in college, he was drafted as a pitcher by the Milwaukee Brewers in the 1993 free agent draft and by the New York Yankees in 1994. An avid tennis player, Ward also shined in the Arthur Ashe Amateur Tennis Tournament in 1994.
Ward was a model student-athlete at Florida State. As a senior and captain of the team in 1993, he voluntarily approached Seminoles head coach Bobby Bowden about a difficult situation surrounding incoming freshman Warrick Dunn, whose mother, policewoman Betty Smothers, was killed in the line of duty during Dunn's senior year of high school in Baton Rouge, Louisiana. Charlie served as a surrogate big brother to Dunn during the latter's first year in Tallahassee, helping him through a trying time by becoming his roommate and friend.
Ward also played basketball for four years at Florida State. Former teammates included future NBA players Bob Sura, Doug Edwards and Sam Cassell. His 1993 team made it to the Southeast Regional Final where they lost to Kentucky 106-81 with the winner advancing to the Final Four. Ward's 1992 team made the Sweet Sixteen. He made the game-winning shot in its Metro Conference Tournament Championship game win over Louisville in 1991. Ward still holds FSU basketball records for career steals at 236, steals in one game at 9 and still ranks sixth all-time in assists at 396. He played a shortened season his senior year, joining the basketball team just 15 days after winning the Heismann Trophy. He started 16 games at the point guard position that year, and averaged a college career high of 10.5 points and 4.9 assists for the season.
In his senior year at Florida State, he also served as Student Government Vice-President, after he was asked to run by the Monarchy Party, a student government reform organization.

Growing up in Thomasville, Ga., Charlie Ward was the quintessential coach's son who loved both football and basketball. So Florida State's Bobby Bowden offered him a deal. Charlie, the legendary football coach said, earn good grades, and someday you can quarterback the Seminoles and play hoops, too.

Ward was up to the challenge. After spending 1988-89 at nearby Tallahassee Community College, he hit the books at FSU and joined the football team at the bottom of the depth chart. And that's where he stayed, even while becoming the basketball team's starting point guard. But he still had his dreams of Saturdays in the fall. "I was going to be a quarterback," Ward says, "and Coach Bowden was true to me in everything he said." In 1991-92 Ward led the basketball team to the NCAA tournament's Sweet 16, and that September, Bowden made the 6'2", 190- pound athletic prodigy his starting quarterback.

In both sports Ward displayed unshakable confidence, scrambling speed and unselfishness. It all culminated in 1993 when he directed the Seminoles to their first football national title and won the Heisman Trophy.

A devout Christian who spent evenings reading the Bible, Ward was cool ice surrounded by flamboyant fire. On a team of yappers, he led by quiet example. "I pick and choose when I want to talk," he says. "Guys respect you for that. Go out and do your job, and people will follow you."

Florida State tweaked its pro-style offense around its leader's hardcourt-tested mobility. The "Fast Break," as it was known, employed a no-huddle shotgun that let Ward either use his receivers or streak from the pocket if he saw a hole. "There's nothing more frustrating for a defense than covering everything perfectly," Bowden said, "except Charlie sidesteps a tackler and runs 30 yards." 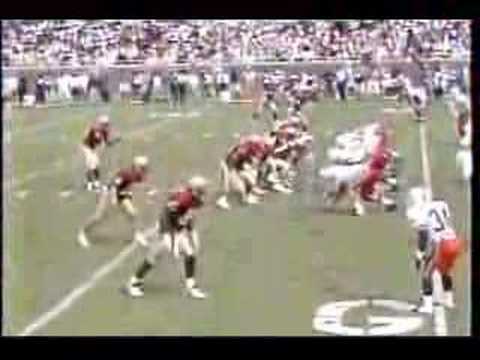