Hurricane Andrew in 1992 proved to be one of the most destructive hurricanes ever to hit the United States.

By the time Andrew made it to Florida’s shore, it had reached Category 4 status and hit land with a 17 foot storm surge that submerged a great deal of the coast. The storm caused roughly $27 billion in damages to Southern Florida and $250 million in the Bahamas.

Andrew was a small and ferocious Cape Verde hurricane that wrought unprecedented economic devastation along a path through the northwestern Bahamas, the southern Florida peninsula, and south-central Louisiana. Damage in the United States is estimated to be near 25 billion, making Andrew the most expensive natural disaster in U.S. history. The tropical cyclone struck southern Dade County, Florida, especially hard, with violent winds and storm surges characteristic of a category 4 hurricane on the Saffir/Simpson Hurricane Scale, and with a central pressure (922 mb) that is the third lowest this century for a hurricane at landfall in the United States.

Andrew first became a tropical depression on August 16 and on August 17, became the first tropical storm of the season. The storm moved rapidly west and northwest during the next few days and on August 22 had reached hurricane strength. Landfall was made in southern Florida August 24th at approximately 5:00 am. Having become a Category 4 storm, the central pressure fell to 922 mb and wind gusts were estimated in excess of 175 m.p.h.. Andrew moved west at 18 m.p.h.

Once over the open waters of the Gulf of Mexico, a moderate intensfication ensued as the storm turned northwestward. August 26, Andrew made landfall again, this time in south central Louisiana, with a central pressure of 956 mb and sustained winds approaching 120 m.p.h.. The hurricane quickly weakened and became a depression 24 hours later, as it was turned sharply northeastward and merged with a frontal system over the eastern United States.

Source: University of Illinois at Urbana-Champaign Added by: Carla Friedman

Hurricane Andrew was the third most powerful Category 5 hurricane to make landfall in the United States during the 20th century, after the Labor Day Hurricane of 1935 and Hurricane Camille in 1969.

Andrew was the first named storm and only major hurricane of the otherwise inactive 1992 Atlantic hurricane season. During Andrew's duration it struck the northwestern Bahamas, southern Florida at Homestead (south of Miami), and southwest Louisiana around Morgan City in August. Andrew caused $26.5 billion in damage ($41.1 billion 2010 USD), with most of that damage cost in south Florida; however, other sources estimated the total cost between $27 billion to $34 billion. 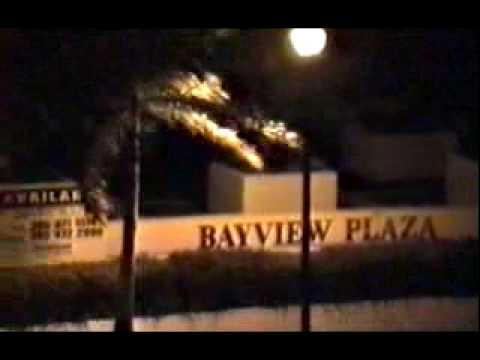