Bill Clinton accepts the Presidential Nomination of the Democratic Party

Clinton, a Southerner with experience governing a more conservative state, positioned himself as a centrist New Democrat.

He prepared for a run in 1992 amidst a crowded field seeking to beat the incumbent President George H. W. Bush. In the aftermath of the Persian Gulf War, Bush seemed unbeatable but a small economic recession spurred Democrats on. Tom Harkin won his native Iowa without much surprise. Clinton, meanwhile, was still a relatively unknown national candidate before the primary season when a woman named Gennifer Flowers appeared in the press to reveal allegations of an affair. Clinton sought damage control by appearing on 60 Minutes with his wife, Hillary Rodham Clinton, for an interview with Steve Kroft. Paul Tsongas of Massachusetts won the primary in neighboring New Hampshire but Clinton's second place finish - strengthened by Clinton's speech labeling himself "The Comeback Kid" - re-energized his campaign. Clinton swept nearly all of the Super Tuesday primaries, making him the solid front runner. Jerry Brown, however, began to run a surprising insurgent campaign, particularly through use of a 1-800 number to receive grassroots funding. Brown scored surprising wins in Connecticut and Colorado and seemed poised to overtake Clinton.
On March 17, Brown forced Tsongas from the race when he received a strong third-place showing in the Illinois primary and then defeated the senator for second place in the Michigan primary by a wide margin. Exactly one week later, he cemented his position as a major threat to Clinton when he eked out a narrow win in the bitterly fought Connecticut primary. As the press now focused on the primaries in New York and Wisconsin, which were both to be held on the same day, Brown, who had taken the lead in polls in both states, made a serious gaffe: he announced to an audience of various leaders of New York City's Jewish community that, if nominated, he would consider the Reverend Jesse Jackson as a vice-presidential candidate. Jackson, who had made a pair of anti-Semitic comments about Jews in general and New York City's Jews in particular while running for president in 1984, was still a widely hated figure in that community and Brown's polling numbers suffered. On April 7, he lost narrowly to Bill Clinton in Wisconsin (37-34), and dramatically in New York (41-26).
Although Brown continued to campaign in a number of states, he won no further primaries. Despite this, he still had a sizable number of delegates, and a big win in his home state of California would deprive Clinton of sufficient support to win the nomination, which Brown apparently thought would revert to him by default. After nearly a month of intense campaigning and multiple debates between the two candidates, Clinton managed to defeat Brown in this final primary by a margin of 48% to 41%

After a long primary process, Governor Clinton was nominated as the Democratic presidential candidate. He chose Senator Al Gore, of Tennessee to be his vice-presidential running mate. Together, Bill Clinton and Al Gore set out by bus to meet the people of America and to hear about their concerns and their hopes for the future. They campaigned on the concept of "putting people first'---preserving the American Dream, restoring the hopes of the middle class, and reclaiming the future for the nation's children.

The 1992 National Convention of the U.S. Democratic Party nominated Governor Bill Clinton of Arkansas for President and Senator Al Gore of Tennessee for Vice President; Clinton announced Gore as his running-mate on July 9, 1992. The convention was held at Madison Square Garden in New York City, New York from July 13 to July 16, 1992. The Clinton-Gore ticket then faced and defeated incumbents George H. W. Bush and Dan Quayle in the 1992 presidential election.
The convention's keynote speaker was former Texas Representative Barbara Jordan, who had also keynoted the party's 1976 convention. Other notable speakers included Democratic National Committee Chair Ron Brown, Elizabeth Glaser, and governors Mario Cuomo (NY) and Zell Miller (GA), who said: "Not all of us can be born rich, handsome, and lucky, and that's why we have a Democratic Party." He also said "Our Commander in Chief talks like Dirty Harry but acts like Barney Fife."
The convention, organized by chairman Ron Brown, was seen as a great success. Unlike some earlier Democratic conventions, it had been well planned and run with few gaffes or errors, as even Republicans conceded. The ending of the convention played the theme song of Bill Clinton's 1992 campaign, Fleetwood Mac's "Don't Stop".
Clinton received a significant poll bounce from the convention, due to both the perceived success of the convention, as well as Ross Perot announcing he was withdrawing from the campaign just as the convention was ending (Perot got back into the race in October).
The convention bounce gave the Clinton/Gore ticket a lead that only shrank significantly when Ross Perot re-entered the race.[1] Clinton and Gore went on to defeat President Bush, Vice-President Quayle along with independent candidate Ross Perot and his running mate, James Stockdale, in the general election. 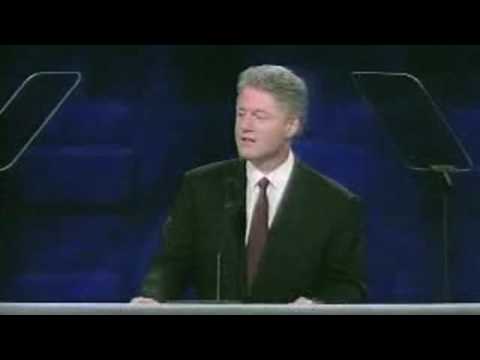 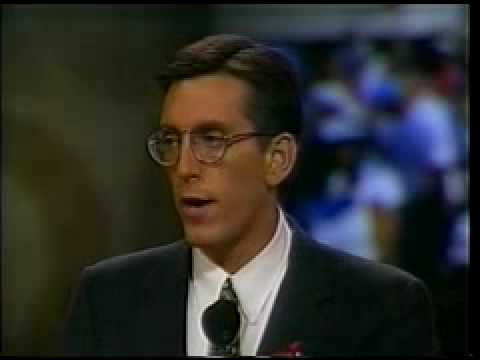