The Zoo TV Tour was an elaborately-staged worldwide concert tour by Irish rock band U2. Launched in support of the album Achtung Baby, the tour visited arenas and stadiums from 1992 through 1993.

The Zoo TV Tour used multimedia and the video age for much of its inspiration, as it was designed to instill a feeling of "sensory overload" in its audience. The stage's 36 video screens flashed random collections of images and slogans from pop culture, while performances were complemented by visual effects on the large screens.

Lead singer Bono described Achtung Baby as "the sound of four men chopping down the Joshua Tree". The Zoo TV Tour marked a shift from the band's previously earnest stage performances from the 1980s to ones that were intentionally ironic and self-mocking; Bono used the tour to showcase numerous stage personas and characters he created. Differing from all previous and subsequent U2 tours, the Zoo TV shows opened with six to eight consecutive new songs before playing older material.

Tour legs were individually known as Zoo TV – The Outside Broadcast, Zooropa, and Zoomerang. The tour began in Lakeland, Florida on February 29, 1992 and ended in Tokyo, Japan on December 10, 1993. It comprised five legs, 157 shows, was seen by about 5.4 million people, and was the highest-grossing tour in North America of 1992. The band's 1993 album Zooropa was recorded during a break in the tour, and its songs were played during 1993 legs of the tour. The tour was depicted in the Grammy Award-winning concert film Zoo TV: Live from Sydney. In 2002, Q magazine called it "still the most spectacular rock tour staged by any band." 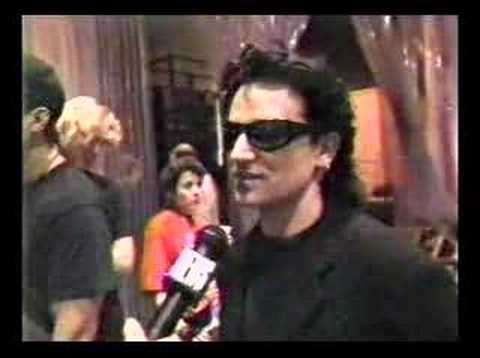