Lauda Air Flight 004 was an international passenger flight that crashed due to a thrust reverser deployment of the number 1 engine in flight.

At 23:22, Welch and Thurner received a visual warning indicating that a possible system failure would cause the thrust reverser on the number 1 engine to deploy in flight. Having consulted the aircraft's Quick Reference Handbook, they determined that it was "just an advisory thing" and took no action.

At 23:31, the thrust reverser on the number 1 engine deployed while the plane was over the jungle near Ban Nong Rong (Uthai Thani Province), Thailand. Thurner's last recorded words were, "Reverser's deployed!"

The 767 stalled in mid-air and disintegrated at 4,000 feet (1,200 meters). None of the 223 passengers and crew aboard the airliner survived. It was the first fatal crash of a Boeing 767. The accident remains the deadliest aviation disaster on Thai soil to date. Rescuers found the body of Welch still in the pilot's seat. After the accident scavengers collected electronics and jewellery.[4] About one quarter of the airline's carrying capacity vanished as a result of the crash.

Upon hearing of the crash, Niki Lauda, retired Formula 1 race driver and owner of the airline, travelled to Thailand. He examined the wreckage and concluded that the largest fragment was about five metres by two metres, "about half the size of the largest piece in the Lockerbie crash."

Aviation writer Macarthur Job has noted that, "had that Boeing 767 been of an earlier version of the type, fitted with engines that were mechanically rather than electronically controlled, then that accident could not have happened."

Lauda flight 004, service from Bangkok to Vienna, departed Don Muang International Airport at 11:02pm the night of May 26, 1991. Along with Captain Tom Welsh and First Officer Josef Thurner, eight cabin attendants and 213 passengers were on board the Boeing 767 that night. 004 climbed out normally from Bangkok, cleared to FL310. After being handed off to Bangkok Control, Thurner called the Lauda Air company base, reporting it's estimated arrival time in Vienna.

This would be 004's last transmission. Some twelve minutes later, while climbing through FL240, 004's target disappeared from Bangkok Control's radar screen. Further radio calls from Bangkok went unanswered. Shortly afterwards, Thailand's Department of Aviation's Rescue Co-ordination Centre received a call from from a remote police outpost reporting that people from a mountain village had reported hearing and seeing an aircraft explode in the air and fall into the jungle. The aircraft was less than two years old at the time and there was not forecast severe weather in the area. Clearly, whatever had caused the accident had struck swiftly, the crew having no time to report and signs of trouble. 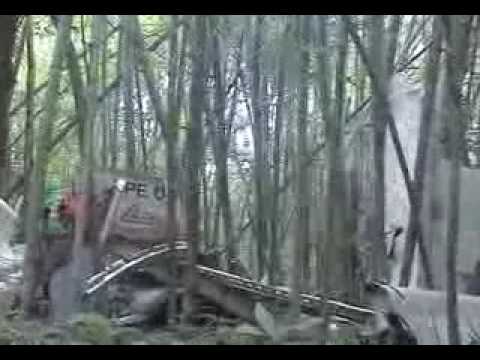