The Ronald Reagan Presidential Library and Center for Public Affairs is the presidential library and final resting place of Ronald Wilson Reagan, the 40th President of the United States.

Designed by Hugh Stubbins and Associates, the library is located in Simi Valley, California, about 40 miles (64 km) northwest of Downtown Los Angeles and 15 miles (24 km) west of Chatsworth. The library may be accessed by driving to the Olsen Road exit of State Route 23, which connects to the nearby Ronald Reagan Freeway, State Route 118.

The Reagan Library is the largest of the twelve federally funded presidential libraries. The street address, 40 Presidential Drive, is numbered in honor of Reagan's place as the 40th President.

As a Presidential library administered by the National Archives and Records Administration (NARA), the Reagan Library, under the authority of the Presidential Records Act, is the repository of presidential records for Reagan’s administration. Holdings include 50 million pages of presidential documents, over 1.6 million photographs, a half million feet of motion picture film and tens of thousands of audio and video tapes. The Library also houses personal papers collections including documents from Reagan’s eight years as Governor of California.

The museum features continually changing temporary exhibits and a permanent exhibit covering President Reagan’s life. This exhibit begins during Reagan's childhood in Dixon, Illinois and follows his life through his film career and military service, marriage to Nancy Davis Reagan, and political career. The "Citizen Governor" gallery shows footage of Reagan's 1964 "A Time for Choosing" speech and contains displays on his eight years as governor. The gallery includes a 1965 Ford Mustang used by Reagan during his first gubernatorial campaign, as well as the desk he used as governor. His 1980 and 1984 presidential campaigns are also highlighted, as well as his inauguration suit and a table from the White House Situation Room is on display. News footage of the 1981 assassination attempt on his life is shown, and information about the proposed Strategic Defense Initiative (SDI — dubbed "Star Wars") is included.

A full scale replica of the Oval Office — a feature of most presidential libraries — is a prominent feature of this museum as well. Other parts of the exhibit focus on Reagan's ranch, the presidential retreat Camp David, life in the White House, and First Lady Nancy Reagan. Conspicuously absent from the permanent exhibit is the Iran-Contra Affair (which had been included in an earlier version of the permanent exhibit), but the episode is briefly mentioned in the Library's orientation film.[citation needed][dubious – discuss] The most recent temporary exhibit ran from November 10, 2007 to November 10, 2008; titled "Nancy Reagan: A First Lady's Style," it featured over 80 designer dresses belonging to Nancy Reagan.

The hilltop grounds provide expansive views of the area, a re-creation of a portion of the White House Lawn, and, like many presidential libraries, a piece of the Berlin Wall. An F-14 Tomcat (BuNo 162592) is also located on the grounds.

On November 8, 2007, Reagan Library National Archives officials reported that due to poor record-keeping, they are unable to say whether roughly 80,000 artifacts have been stolen or are lost inside the massive museum complex. A "near-universal" security breakdown was also blamed, leaving the artifacts vulnerable to theft. Many of the nation's presidential libraries claim to be understaffed and underfunded. The National Archives labeled the Reagan library as having the most serious problems with their inventory. In an audit, U.S. Archivist Allen Weinstein rebuked the library's poor inventory software for the mishap. Frederick J. Ryan Jr., president of the Ronald Reagan Presidential Foundation's board of directors, said the allegations of poor management practices at the library reflect badly on the National Archives. Nevertheless, the library accepts the criticism of the audits and have undertaken a massive inventory project that will take years to complete. Ryan said Nancy Reagan expressed "surprise and disappointment" when he spoke with her regarding the affair.

A 90,000-square-foot (8,400 m2) exhibit hangar serves as the setting for the permanent display of the Boeing 707 aircraft utilized as Air Force One during Reagan's administration. The aircraft, SAM 27000, was also used by six other presidents in its active service life from 1973–2001, including Richard Nixon during his second term, Gerald Ford, Jimmy Carter, George H.W. Bush, Bill Clinton, and George W. Bush. In 1990 it became a backup aircraft after the Boeing 747s were brought into service and was retired in 2001. The aircraft was flown to San Bernardino International Airport in September 2001 where it was presented to the Reagan Foundation. In what was known as Operation Homeward Bound, Boeing, the plane's original manufacturer, disassembled the plane and transported it to the library in pieces. After the construction of the foundation of the pavilion itself, the plane was reassembled and restored to museum quality, as well as raised onto pedestals twenty-five feet above ground. The pavilion was dedicated on October 24, 2005 by Nancy Reagan, President George W. Bush and First Lady Laura Bush.

SAM 27000 is part of a comprehensive display of presidential travel that also includes a Johnson-era Sikorsky VH-3 Sea King, call sign Marine One, and a presidential motorcade — Reagan's 1984 presidential parade limousine, a 1982 Los Angeles Police Department police car (as well as two 1980s police motorcycles), and a 1986 Secret Service vehicle used in one of President Reagan's motorcades in Los Angeles. The pavilion is also home to the original O'Farrell's pub from Ballyporeen in the Republic of Ireland that President and Mrs. Reagan visited in June 1984, now called the "Ronald Reagan Pub." Also featured are exhibits on the Cold War and Reagan's extensive travels aboard Air Force One.

On June 9, 2008 Secretary of Education Margaret Spellings joined Nancy Reagan to dedicate the Reagan Library Discovery Center, located in the Air Force One Pavilion.[26] The center is an interactive youth exhibit in which fifth through eight grade students participate in role-playing exercises based on events of the Reagan administration.

Reagan Library has hosted many events, including the funeral of Ronald Reagan in June 2004, and the first Republican presidential candidates' debate of the 2008 primaries. On May 23, 2007, Secretary of State Condoleezza Rice and Australian Foreign Minister Alexander Downer held a brief private talk and a press conference. On July 17, 2007, Polish President Lech Kaczyński presented Poland's highest distinction, the Order of the White Eagle, to Mrs. Reagan.

Following his death, Reagan's casket was driven by hearse to the Reagan Library on June 7, 2004. There, a memorial service was held in the library lobby with Nancy Reagan, Reagan's children, close relatives, and friends. The Reverend Dr. Michael Wenning officiated the service.

From June 7 to 9, Reagan's casket lay in repose in the library lobby, where about 105,000 people paid their respects by walking past the casket. After flying the body to Washington, D.C., lying in state in the Capitol rotunda, and a national funeral service in the Washington National Cathedral, Reagan's casket was brought back to the library in California for a last memorial service and interment.

A tomb had been previously built for the eventual use of Reagan and his wife. Following a sunset service on the library grounds the previous evening, early on the morning of June 12, 2004 Reagan was laid to rest in the underground vault.

On January 30, 2008, after the Republican candidates were narrowed to four — Mitt Romney, Mike Huckabee, Ron Paul, and John McCain — the Library was the scene of the final GOP debate, once again hosted by the Reagan Foundation and Mrs. Reagan. 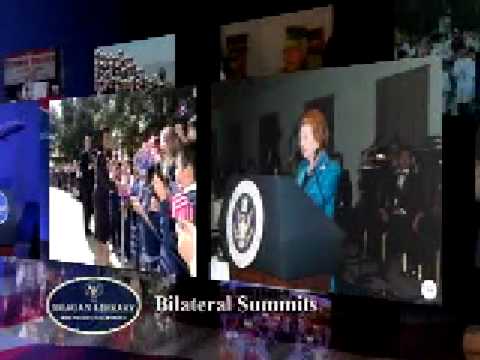