The Lamborghini Diablo was a high-performance mid-engined sports car built by Italian automaker Lamborghini between 1990 and 2001.

It was the first Lamborghini capable of attaining a top speed in excess of 200 miles per hour (320 km/h). After the end of its production run in 2001, the Diablo was replaced by the Lamborghini Murciélago.

At a time when the company was financed by the Swiss-based Mimram brothers, Lamborghini began development of what was codenamed Project 132 in June 1985 as a replacement for the Countach model. The brief stated that its top speed had to be at least 315 km/h.

The design of the car was contracted to Marcello Gandini, who had designed its two predecessors. When Chrysler bought the company in 1987, providing money to complete its development, its management was unimpressed with Gandini’s designs and commissioned its design team in Detroit to execute a third extensive redesign, smoothing out the trademark sharp edges and corners of Gandini's original design, and leaving him famously unimpressed.

The car became known as the Diablo, carrying on Lamborghini's tradition of naming its cars after breeds of fighting bull. The Diablo was named after a ferocious bull raised by the Duke of Veragua in the 19th century, famous for fighting an epic battle with 'El Chicorro' in Madrid on July 11 1869. In the words of Top Gear presenter Jeremy Clarkson, the Diablo was designed "solely to be the biggest head-turner in the world."

The Diablo was presented to the public for sale on January 21, 1990 at a base price of USD $240,000 at the Hotel de Paris in Monte Carlo during the second Lamborghini Day.[2] Power came from a 5.7-litre, 48-valve version of the legendary Lamborghini V12 featuring dual overhead cams and computer-controlled multi-point fuel injection, producing a maximum output of 492 hp (367 kW; 499 PS) and 427 ft·lbf (579 N·m) of torque. The vehicle could reach 60 mph (97 km/h) in slightly under 4 seconds, with a top speed of 202 mph (325 km/h). The Diablo was originally rear-wheel drive and the engine was mid-mounted to aid its weight balance.

Even at over $240,000, the vehicle was somewhat spartan, featuring only basic radio functions (with optional CD playback) along with manual windows, adjustable but unpowered seats and no anti-lock brakes, mostly to minimize the vehicle's already high curb weight. A few options were available, including having the driver's seat molded specifically for the buyer, a rear spoiler, a factory fitted luggage set (priced at $2,600) and an exclusive Breguet clock for the dash (priced at $10,500).

For years the Lamborghini Countach was the world’s most outrageous supercar. Its gull-wing doors, huge rear spoiler and brutal looks were the stuff of schoolboy fantasy. So when in 1990 Lamborghini unveiled its replacement, the Diablo, schoolboys held their breath.

At first sight the car looked a good deal more conservative — gone were the gull-wing doors and huge spoiler — and the smoother shape was sexy rather than scary. Had Lamborghini gone soft? Definitely not.

Under the skin the new Diablo had more power, more traction and more speed. The V12 engine had grown from 5167cc in the old LP5000S QV Countach to 5707cc. Power was also up by nearly 40bhp and the top speed had rocketed to more than 200mph.

Looking at the Diablo today it’s hard to believe the design is more than 14 years old. Slip inside, through the scissor-opening doors, and it’s every inch the supercar.

The seats are low, firm and lacking in much adjustment. For taller drivers the low roofline will create problems and rear visibility is appalling, particularly if the car is fitted with the optional rear spoiler. But fire the engine up and all that is soon forgotten: on the road the Diablo shortens straights and straightens corners in an unreal way.

Roadholding in the dry is surreal but watch out in the wet. Another scare comes if you dab the brakes too hard — the oversensitive antilock system kicks in early to remind drivers that while the car can shed speed very rapidly, a missed braking point can create serious problems.

Originally the Diablo was available only in rear-wheel drive. The 5.7 litre V12 engine produced 492bhp and incredible performance and sound but the lack of traction control could make it a handful to drive.

The introduction of VT (Viscous Traction) four-wheel drive in 1993 created a more forgiving car. This added a few tenths to the 0-62mph time but Lamborghini claimed a similar top speed of 202mph.

To complement the VT a convertible four-wheel-drive model, the Diablo Roadster, was introduced in 1995. Using a simple targa roof panel that could be stowed above the engine cowl, Lamborghini managed to produce one of the prettiest supercar roadsters ever. Rear-wheel drive was not abandoned, however, and the later SV, SV Roadster, GT and GTR models continued to use it.

Supercars don’t pretend to be practical. What little space the Diablo offers for luggage is filled by the beautifully trimmed two-piece leather luggage set (a useful option); and with fuel consumption that regularly dips to around 10mpg you’ll have to get used to those scissor-opening doors when you stop for fuel.

When Lamborghini came under the ownership of Volkswagen the additional resources were employed to produce a final incarnation of the Diablo — the 6 litre car launched in 2000. The larger engine boosted power to 550bhp, some body panels were changed and the car’s interior revised. A more powerful climate control system was also fitted.

Putting every kind of car imaginable through our tire-squealing, sheetmetal-quivering, eyelid-fluttering performance tests is, as you can imagine, more fun than finding out your fiancee's parents have a large Ferrari collection that needs regular exercise. But every so often, particularly with cars named after, oh, the devil, there emerges at the test track a potential for mechanical hara-kiri that verges on the terrifying.

Such was the case recently when we flew to Milan, Italy, to test the latest Lamborghini Diablo VT (the VT indicates the four-wheel-drive version). This last Diablo in a decade of flamboyant--some daresay outrageous--sports cars first introduced in 1990 is certainly the best Diablo.

The VT is, curiously, a very high-powered four-wheel-drive beast. Situated amidships is the biggest, baddest V-12 engine we've ever tested in a Diablo. For this 2000 model, Lamborghini has lengthened the stroke by 0.16 inch, lightened the crankshaft, used lighter and stronger titanium connecting rods, and updated the old 16-bit engine-control system to a more powerful 32-bit unit. As a result, peak engine output has been promoted to 543 horsepower at 7100 rpm, 20 more than found in the last Diablo. Torque is up 11 pound-feet to 457 at 5800 rpm. Horsepower freaks take note: This latest Diablo now has more horsepower than four four-cylinder Toyota Camrys. (Hey, where else can you get these vital comparisons?)

Despite the fact the rear tires--Z-rated Pirelli P Zeros, good for more than 200 mph--are so wide that, at first glance, they appear to form a solid rolling pin of rubber across the rear of the car (they're 13.2 inches wide), 543 horses and 457 pound-feet of torque can reduce them to pudding. To counter that possibility, the Diablo VT's four-wheel-drive system makes perfect sense. A viscous coupling transfers power to the front wheels if the rears slip; the rest of the time, the Diablo prowls about as a rear-drive car. At most, 28 percent of engine torque is routed to the front wheels. There are no levers to switch or buttons to punch to engage this four-wheel-drive system, and during routine driving, you'd never know this wild Italian was a four-wheeler.

Perform a drag-strip launch, however, and you'll instantly realize the Diablo VT is not a rear-driver. Usually, those of us who drive in hard acceleration tests rely on a touch of wheelspin to get the car moving in the quickest manner. In a four-wheel-drive car with sticky tires, it is almost impossible to get those rears spinning in a hard launch, unless the car has a system that allows some initial rear wheelspin before the fronts get the juice. An example of one such car is the 1997 Porsche 911 Turbo S. Hold the gas pedal down to create 4500 rpm in that sports car, then drop the clutch, and the rear tires will spin for a moment before power is directed to the front wheels; the tires dig in and you're off. In that Porsche, we've recorded 0-to-60-mph blasts in an amazingly fast 3.7 seconds.

But we've tested just one Diablo VT before (C/D, September 1994), because they are very tough to come by--just 23 were sold in the U.S. in 1999, apparently to people who own small countries or athletic shoe companies, at a price of about $275,000. At that test, we declined to risk the dropped-clutch technique, figuring the Diablo's massive tires (235/40ZR-17s up front and 335/35ZR-17s at the rear) and substantial weight (3900 pounds) would result in gobs of traction and no wheelspin. More to the point, there's a good chance that revving the engine and dumping the clutch would fry the clutch and possibly destroy it, and we did not want to find out what that repair bill would look like. A good guess is somewhere in the vicinity of $9000.

Turns out we were half right. The Diablo can, with the right driver, survive drop-clutch launches -- we watched three such feats performed remarkably by Lamborghini's own test driver, Mario Fasanetto (You were expecting whom--Jim Scoutten?). After Fasanetto performed three flawless wheelspinning launches in a gray Diablo, a writer for another magazine who was on hand decided he'd like to acquire his own test numbers. Fasanetto got out of the Diablo and instructed the magazine writer to drop the clutch while the engine was revving between 6000 and 7000 rpm. Fasanetto also warned him: "If you make a mistake and don't get wheelspin, you'll destroy the clutch in two tries." The writer drove to the staging area, held the revs at the instructed point, then dumped the clutch. Instead of rear wheelspin, we were treated to the nauseating sound (and then the smell) of an overstressed clutch that was busy producing nightmarish blue smoke. But the Diablo still drove fine, so after performing one more, less stressful launch, the writer parked it.

We were originally scheduled to test that same day, but Ferrari's Formula 1 team decided it needed the track more than we did, so we tested the following day at Pirelli's test track in Vizzola. 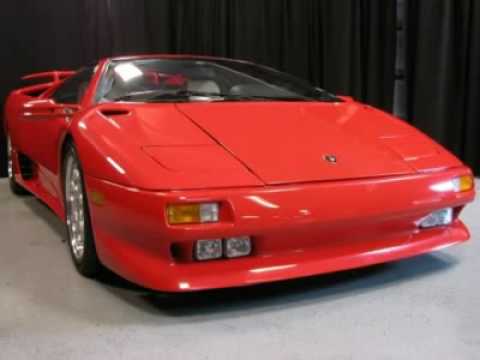