Chrysler has manufactured and marketed the Chrysler Town and Country minivan worldwide since its 1990 introduction.

Other rebadged variants have included the now discontinued Plymouth Voyager and Chrysler Voyager as well as the Dodge Caravan and Volkswagen Routan.
The Town and Country has evolved through five generations, variously in long wheelbase (LWB) and short wheelbase (SWB) versions — though currently only in LWB form. Anniversary editions have included the 1994 "10 Year Anniversary Edition" and the 2004 Platinum Series, marking the Chrysler twentieth year of minivan production.
Together with its nameplate variants, the Dodge Caravan, Chrysler Voyager, and Plymouth Voyager, the Chrysler minivans have ranked as the 13th bestselling automotive nameplate worldwide, with over 12 million sold.

The Town and Country was introduced in 1989 (as 1990 model) alongside the Plymouth Voyager and Dodge Caravan — featuring more amenities than either and built on a long wheelbase (LWB) version of the same Chrysler S platform. The 1990 Town & Country offered leather interior, power windows, power locks, air conditioning, an Infinity sound system, exterior woodgrain applique, seven-passenger seating and an electronically-controlled four-speed automatic transmission. Ironically, the first generation of this make and model rebadge would be redesigned as the bodystyle was aging at the time of introduction. With a total production of less than 10,000 units for 1990, first generation Town & Countrys are rare finds today.

The 1991 through 1995 Town and Country used the Chrysler AS platform. This was the last Town and Country that was derived from the Chrysler K platform. As with the previous generation, the Generation II Town & Country came fully equipped, with no actual trim levels but only additional options — and continuing exclusively in the long wheelbase (LWB) format.

The 1996 redesign used the Chrysler NS platform and included several industry firsts, including a driver's-side sliding door and a seating management system marketed as Easy Out Roller Seats.
With Generation III, the Town and Country was offered in various trim levels. The LXi (and later Limited) included amenities such as pre-programed driver's seat and mirror, leather interior, 8-way power adjustable front seats, Infinity sound system with cassette/CD player, and dual driver/passenger climate control to name a few. The LX model featured fewer amenities in a long wheelbase (LWB) form. The SX model featured similar content in a short wheelbase (SWB) form.
Base models of the Town and Country were offered in most states with the 3.0 L Mitsubishi V6 engine, except in California and several northeastern states, where the Mitsubishi V6 didn't meet emissions standards. In those locales, the 3.3 L engine was offered instead from 1997 through 2000. In Canada, Town and Country models came standard with the 3.8 L V6 and were offered only in long wheelbase (LWB) versions.
In 1999, Chrysler presented a concept minivan, the Pacifica using the Town & Country's body shell and bearing resemblance to the Town & Country and the LHS.
Generation III examples of the Town and Country with only the passenger side sliding door (vs. both rear sliding doors) were only offered for 1996.

The 2001 minivans used the Chrysler RS platform. The Plymouth Voyager and Grand Voyager had been transferred to the Chrysler brand in mid-2000, and for 2001, the Chrysler Voyager was available as a short-wheelbase model only. Thereafter, from 2003 to 2007, Chrysler offered a short-wheelbase version of the Town & Country. 2004 SWB models had slightly different grille designs than other Town and Countries, sharing their design with the Voyager, a distinction that disappeared the next year.
In 2005, Chrysler introduced a system of second and third row seating that folded completely into underfloor compartments — marketed as Stow'n Go seating.

Chrysler debuted the 2008 model year Town and Country at the 2007 Detroit Auto Show — eliminating the short wheelbase model. The minvans featured styling by Ralph Gilles, a six-speed automatic, a new 4.0 L V6 engine are standard on the Limited model — and a system of second row seats that swiveled to face the third row — marketed as Swivel'n Go seating. On November 4th, 2009, Fiat announced the Town and Country will be remade in 2010 as well as the Grand Caravan.

The highest-ranking member of Chrysler's family of front-wheel-drive minivans, the Chrysler Town & Country has long appealed to families and empty-nesters seeking a practical vehicle with a dash of luxury inside and out. Early T&Cs satisfied this desire with wood-grain decals, leather seats and a standard V6 engine, while the current model offers amenities like a navigation system, tri-zone climate control and a power-operated liftgate. Since its introduction for 1990, the Chrysler Town & Country has shared all of its mechanicals with its less upscale Dodge siblings, the Caravan and Grand Caravan, and that carries through to the current generation.

Over the years, some of the Town & Country's amenities have been truly ground-breaking. The T&C and its twin, the Dodge Grand Caravan, have been the first and only vans to offer Stow 'n Go, a seating system that provides fold-flat capability for both the second- and third-row seats, as well as in-floor storage compartments when the seats are occupied. They were also the first to offer driver-side sliding doors. But in other aspects, the T&C's features list has often been a step behind the competition. It was among the last minivans to offer essential features like stability control and a rearview camera. Reliability concerns are also perpetual. Overall, the T&C may be Chrysler's finest, but there are typically better minivans on the market.

The Chrysler Town & Country comes in three trims: LX, Touring and the premium Limited. Even the base model is reasonably well equipped, featuring the Stow 'n Go system as standard, though many buyers will want to step up to the midlevel Touring to benefit from additional amenities such as a power liftgate. With the Limited, you get additional luxuries like heated second-row seats and an eight-way power front passenger seat.

Powering the LX is a 3.3-liter V6 that offers 175 horsepower; it's paired with a four-speed automatic transmission. Touring models get a 197-hp 3.8-liter V6, teamed with a six-speed automatic transmission. The most appealing choice is the 4.0-liter V6 that powers Limited models. Paired with the six-speed transmission, the engine puts forth 251 hp and endows the van with respectable quickness. The list of standard safety equipment on all Town & Country minivans is generous, and includes stability control, antilock brakes with brake assist, and three rows of head curtain airbags.

One notable feature on the current T&C is Swivel 'n Go seating, which consists of second-row captain's chairs that turn 180 degrees to face the third row for card-playing and such. Entertainment options are abundant. A three-zone video entertainment system allows front, middle and rear-seat passengers to view or listen to separate entertainment sources, and passengers can enjoy Sirius Backseat TV as an available option.

Unfortunately, our editors have found that the T&C is hindered by numerous shortcomings. At the top of the list, materials and build quality in the cabin are remarkably poor. The base engine is ancient and lethargic, and the 3.8-liter engine isn't much better. Driving dynamics are also lackluster. Buyers should also be aware that Chrysler's Town & Country doesn't offer an eight-passenger seating option; seven is the most you can carry. The T&C will do the job for most families, but other minivans are likely to do it better.

The fourth-generation Chrysler Town & Country was offered in regular- and long-wheelbase sizes. From 2001-'03, the short-wheelbase vans were called Voyagers (following the demise of the Plymouth brand), but since then all Chrysler-brand vans have been badged as Town & Countrys. Chrysler has fiddled with the trim levels several times during this generation, so used-minivan buyers are likely to come across many different trim level nomenclatures.

Base models came with most essentials, though antilock brakes were optional. The midlevel trim was your ticket to the Stow 'n Go fold-flat seating system. Lower trims came with a 180-horsepower, 3.3-liter V6; in editorial reviews, we noted that this engine moved the van adequately around town but felt breathless at highway speeds. A stronger 3.8-liter V6 good for 215 hp was offered on midlevel and premium trims, making these better choices for most buyers.

The Chrysler Town & Country was one of the few minivans with an all-wheel-drive option, but this was discontinued for 2005, likely due to packaging constraints associated with Stow 'n Go, which debuted that year. (Earlier T&Cs did not have fold-flat seats.) This was also the first year you could get side curtain airbags; in previous years, only front seat-mounted side airbags were available.

One negative aspect of the fourth-generation Town & Country model was its inconsistent reliability. Chrysler responded to concerns about long-term durability in 2002 by instituting a seven-year/70,000-mile powertrain warranty; however, this was rolled back to three-year/36,000-mile coverage in 2006.

For an older model, you'll want to check out the third-generation Town & Country, which was sold from 1996-2000. Although reliability has also been an issue on these vans, if you find one with a clean bill of health, it could still be a good source of family transportation.

The third-gen T&C was sleeker and more refined than most minivans of this era. And, along with its Dodge and Plymouth siblings, it was the first minivan to offer a driver-side sliding door, which gave parents the flexibility to load up the kids from either side of the van. The best years to look at are 1998 through 2000, when an upgraded version of the 3.8-liter V6 (good for 180 hp) was available. Other than spotty reliability, safety was the major shortcoming on third-generation Town & Countrys. Crash test scores were mediocre across the board and side airbags were not available.

The Chrysler Town & Countrys four earliest generations have all been plagued with reliability issues, but the first and second generation were especially troublesome, due to issues related to the automatic transmission. For this reason, we'd advise used-car buyers to steer clear of these oldest T&Cs. 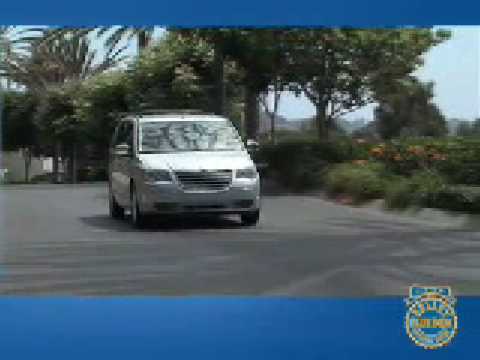