From the information reported in the media and observations from the CFR staff during an on-site investigation, the ignition scenario for this fire was as follows.

The Happy Land fire was an arson fire which killed 87 people trapped in an unlicensed social club called "Happy Land" (at 1959 Southern Boulevard) in the West Farms section of The Bronx, New York, on March 25, 1990. Most of the victims were ethnic Hondurans celebrating Carnival. Unemployed Cuban refugee Julio González, whose former girlfriend was employed at the club, was arrested shortly after and ultimately convicted of arson and murder.

That evening González had argued with his former girlfriend Lydia Feliciano, a coat check girl at the club, urging her to quit. She claimed that she had had enough of him and wanted nothing to do with him anymore. González tried to fight back and was ejected by the bouncer. He was heard to scream drunken threats in the process. Julio was enraged, not just because of Lydia, but since he had recently lost his job at a lamp factory, was impoverished, and had virtually no companions. He returned to the establishment with a plastic container of gasoline which he found on the ground and took to a gas station to fill, which he spread on the only staircase into the club. Two matches were then used to ignite the gasoline.

The fire exits had been blocked to prevent people from entering without paying the cover charge. In the panic that ensued, a few people escaped by breaking a metal gate over one door.

González then returned home, took off his gasoline-soaked clothes and fell asleep. He was arrested the following afternoon after authorities interviewed Feliciano and learned of the previous night's argument. Once advised of his rights, he admitted to starting the blaze. A medical examination found him to be sane.

So, at about 3:30 AM, Julio approached East Tremont Avenue carrying his $1 worth of gasoline. He walked the 50 feet from the corner to the street level entrance to Happy Land. There was no one standing in the doorway at that time. All the customers who were usually found out front were upstairs drinking and dancing to the D.J. music. The building itself seemed to rock from the pulsating music. Gonzalez, full of beer and anger, his sense of machismo deeply wounded, spilled gasoline onto the floor and steps of the hallway. Several patrons who were at the top of the steps saw him in the shadows below, but thought nothing of it. 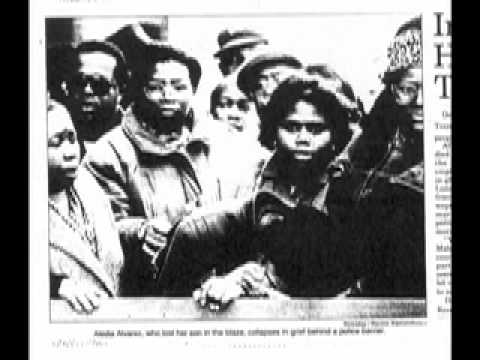