The Shot is the name given to a game-winning basket made by Michael Jordan of the Chicago Bulls in the fifth and final game of the first round of the 1989 NBA Playoffs against the Cleveland Cavaliers, on May 7, 1989, on Cleveland's home floor in Richfield, Ohio. The buzzer-beater gave Chicago the best-of-five series, 3–2. It was both a game and series winner. The Shot is considered one of Jordan's greatest clutch moments, and the game itself a classic.

It was the first among many game-winning shots Jordan would make in his playoff career. In Game 4 during the second round of the 1993 Playoffs Jordan would make another series winning buzzer beater on the same end of the court, in the same building giving the Bulls their 4th playoff series win over the Cavaliers, that time a four game sweep.

The Bulls were winless in six games against the Cavaliers in the regular season, including a 6-point loss in the final regular-season game in which the Cavaliers rested their four best players (Ron Harper, Mark Price, Brad Daugherty, and Larry Nance). The Bulls' playoff victory was considered an upset. In retrospect, it symbolized the beginning of a dynasty in Jordan's Bulls.

The inbounds pass comes in to Jordan. Here's Michael at the foul line, the shot on Ehlo...good! The Bulls win! They win! They beat Cleveland Cavaliers! Michael Jordan hits at the foul line! 101-100! 20,273 in stunned silence here in the Coliseum. Michael Jordan with 44 points in a game hit the shot over Craig Ehlo. What tremendous heroics we have had in Game 5. From both teams, what a spectacular series this has been. In my days in the NBA, 16 years, greatest series I've ever seen.” 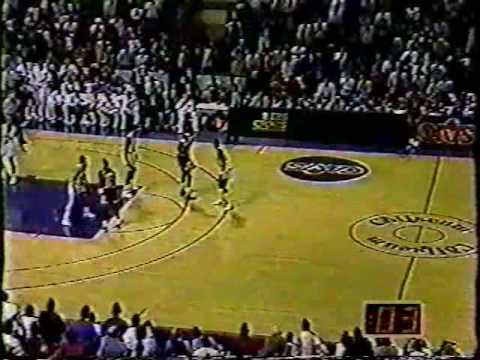