On March 24, 1989 the oil tanker Exxon Valdez ran aground on Bligh Reef in Prince William Sound, Alaska, spilling an estimated 11 million gallons of crude oil across 1,300 miles of coastline - a catastrophic event that lead to one of the most thorough examinations of the effects of oil on the environment. While the vast majority of the spill area now appears to have recovered, pockets of crude oil remain in some locations, and there is evidence that some damage is continuing.

The final legacy of the Exxon Valdez oil spill is not a pristine ecosystem’s defilement, or the destruction of millions of animals. It’s the accumulation of scientific knowledge about oil in our environment.

Contrary to the conventional wisdom of 1989, oil isn’t just a problem in a the immediate aftermath of a spill, when coastlines and wildlife are covered in a hideous, highly photogenic slick. It wreaks a subtle, long-term havoc, as toxic chemicals enter ecological cycles and take decades to break down. That’s not only true in Prince William Sound, but around the United States, where millions of gallons of oil spill every single year.

"Most of the oil that runs off roads and parking lots doesn’t go into sewage treatment plants," said Mary Kelly, co-director of the Environmental Defense Fund’s land, water and wildlife program. "It just runs off into waterways."

The recent $5 billion verdict against Exxon in the 1989 Exxon Valdez oil spill off the Alaskan coast has renewed the barrage of media and public condemnation of punitive awards that are far too extravagant and raised the question of jury judiciousness. Such criticism, however, is unwarranted and it ignores the compelling facts of the Exxon case.

To gain initial approval for the trans-Alaska pipeline, Exxon and its six oil company partners promised to use double-hulled tankers, to have pilots and escort tugs during the entire transit of Prince William Sound and to do all other things necessary to prevent a major spill in Prince William Sound. They also promised to have equipment on hand that would clean up a 200,000 barrel spill.

But shortly after approval was granted, these promises were broken. The Exxon Valdez was single-hulled, the pilot got off shortly after entering Prince William Sound, there were no escort tugs and there was no capacity to clean up a spill one-tenth the size of the Exxon Valdez spill. This behavior put in jeopardy one of the last pristine environments in the world, Prince William Sound.

The Exxon Valdez oil spill occurred in Prince William Sound, Alaska, on March 24, 1989, when the Exxon Valdez, an oil tanker bound for Long Beach, California, struck Prince William Sound's Bligh Reef and spilled 10.8 to 32 million US gallons (40.9 to 120 million litres, or 260,000 to 750,000 barrels) of crude oil. It is considered to be one of the most devastating human-caused environmental disasters ever to occur in history. As significant as the Valdez spill was — the largest ever in U.S. waters until the 2010 Deepwater Horizon oil spill — it ranks well down on the list of the world's largest oil spills in terms of volume released. However, Prince William Sound's remote location, accessible only by helicopter, plane and boat, made government and industry response efforts difficult and severely taxed existing plans for response. The region is a habitat for salmon, sea otters, seals and seabirds. The oil, originally extracted at the Prudhoe Bay oil field, eventually covered 1,300 miles (2,100 km) of coastline, and 11,000 square miles (28,000 km2) of ocean. 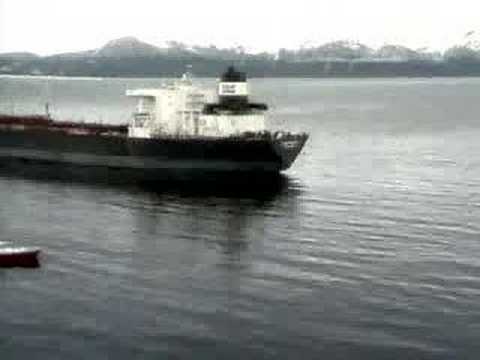