In winning the Heisman Trophy in 1988, Barry set 25 NCAA records.

A running back averaging 100 yards per game is considered superior. Barry obliterated that statistic, averaging 200 yards per game during Oklahoma State's 1988 season. In addition, Barry shattered several NCAA single season and career marks, including leading the nation in rushing yards with 2,628 yards, all purpose yards with 3,249 yards, touchdowns scored at 39 and posting an all-time rushing record. Barry is the only Heisman winner to be notified of his achievement in Tokyo, Japan, where he and his Cowboy teammates were awaiting the final game of the season. Sanders, the Detroit Lions' number one pick in the 1989 NFL Draft, continued to dazzle and mesmerize defenses with his awesome speed, versatility, and evasive maneuvers. Barry was named the 1989 Rookie of the Year, 1991 and 1994 NFC Most Valuable Player of the Year, 1994 NFL Performer of the Year and is an 8-time all-NFL and Pro Bowl player. In addition to his on-field performance, Barry donates a tremendous amount of time and money to local charities and religious organizations in Detroit, Oklahoma and his hometown of Wichita, KS. Barry retired from the NFL in 1999.

Barry Sanders became Oklahoma State's first Heisman winner and also became the first winner to be notified of his selection while in Japan while playing in a special NCAA game in Tokyo. He swept all six sections and ran away with the voting as he beat out the four quarterbacks who trailed him in the balloting.

Barry David Sanders (born July 16, 1968) is a former American football running back who spent all of his professional career with the Detroit Lions in the NFL. Sanders is best known for being one of the most prolific running backs in NFL history, and left the game just short of the all-time rushing record. Sanders is widely regarded as one of the greatest running backs ever to play the game, and certainly the most elusive.

Sanders played for the Oklahoma State Cowboys from 1986 to 1988, and wore the number 21. During his first two years, he backed up All-American Thurman Thomas. Thomas moved on to the NFL, and Sanders became the starter for his junior year.
In 1988, in what has been called the greatest season in college football history, Sanders led the nation by averaging 7.6 yards per carry and over 200 yards per game, including rushing for over 300 yards in four games. He set college football season records with 2,628 yards rushing, 3,249 total yards, 234 points, 39 touchdowns, of which 37 were rushing (also a record), 5 consecutive 200 yard games, scored at least 2 touchdowns in 11 consecutive games, and 9 times he scored at least 3 touchdowns. Sanders also ran for 222 yards and scored 5 touchdowns in his three quarters of action in the Holiday Bowl - a game that was not included with his season statistics. Sanders won the Heisman Trophy as the season's most outstanding player. However, he left Oklahoma State before his senior season to enter the NFL draft.

Sanders was born on July 16, 1968 in Wichita, Kansas. After playing high school ball at North Wichita High School, Sanders played in college at Oklahoma State University. His first two years were spent primarily as a back up to All-American, and future NFL star Thurman Thomas. Despite being a backup, Sanders was still able to rack up a combined 947 yards rushing and 11 rushing touchdowns his first two years. However, it was when Thomas left for the NFL after the 1987 season that Sanders was able to make his mark on college football, and a large mark it was. As a junior in 1988, Sanders set 34 NCAA records on his way to winning the Heisman Trophy. Among those records were: single season rushing yards (2,628), total yards (3,249), rushing touchdowns (37), total touchdowns (39), and most points (234). Some have called this the greatest season in the history of college football. In addition to the Heisman, Sanders also won the Maxwell Award, the Walter Camp Award, and was a First Team All-American that same year. Following this incredible season, Sanders decided to skip his senior year and enter the NFL Draft. 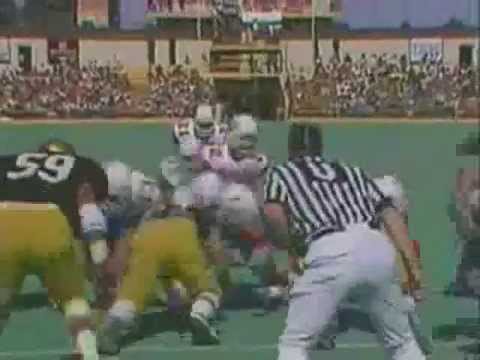