The 1988 World Series matched the Oakland Athletics against the Los Angeles Dodgers, with the Dodgers upsetting the heavily favored A's to win the Series in five games (the exact opposite result of their 1974 meeting, which also went five games). The most memorable moment of the 1988 World Series occurred when injured Dodgers MVP Kirk Gibson, who could barely walk due to injuries suffered during the National League Championship Series, hit a pinch-hit, walk-off home run against Athletics closer Dennis Eckersley in Game 1.

The Los Angeles Dodgers won the National League West division by seven games over the Cincinnati Reds then upset the New York Mets, four games to three, in the 1988 NLCS. The Oakland Athletics won the American League West division by thirteen games over the Minnesota Twins then swept the Boston Red Sox, four games to none, in the American League Championship Series. This was the first World Series to have the series logo on the players' uniforms.

The Dodgers' team batting did not finish in the top five in any offensive statistical category except batting average (fifth), at .248—no regular or backup hit over .300 or drove in over 90 runs. Kirk Gibson’s 25 home runs led the team but was only good enough for seventh in the National League. Slugger Pedro Guerrero had a sub-par year and was traded in July to the Cardinals for pitcher John Tudor. No position player was good enough to make the All-Star Game.

However, the Dodgers were sixth in the NL in runs scored and backed that up with excellent pitching. Despite dealing All-Star pitcher Bob Welch to Oakland prior to spring training and an injury to Fernando Valenzuela (5–8, 4.24 ERA), the Dodgers were second in the NL in team ERA and runs allowed, and led the league in complete games and shutouts. The staff was anchored by Cy Young Award-winner Orel Hershiser, who led league in wins, won-loss percentage (23–8, .864), complete games (15), shutouts (8), and sacrifice hits (19).

It was intensity and fortitude, however, that defined the 1988 Dodgers, a trend that began when Kirk Gibson was signed as a free-agent over the winter from the Detroit Tigers, the team he helped lead to the 1984 World Championship. Moreover, the invincible Hershiser threw shutouts in his last six regular season starts en-route to a record 59 consecutive scoreless innings pitched, breaking the mark held by former Dodger great Don Drysdale. Hershiser would dominate the Mets in the NLCS, while Gibson hobbled through on bad knees and a bruised hamstring but would produce a memorable, if not the greatest, at-bat (in Game 1) of the World Series.

The powerful Oakland Athletics had all the confidence and swagger of a heavily-favored team. The “Bash Brothers” duo of Mark McGwire (32 home runs, 99 RBI, .260 batting average) and José Canseco (42 home runs, 124 RBI, .307 batting average) were in their early twenties, emerging as young superstars. Canseco became the first player to hit 40 or more home runs and steal 40 or more bases in Major League history and would capture the Most Valuable Player award in the American League. Veterans Dave Henderson (24 home runs, 94 RBI, .304 batting average) and longtime Pirate Dave Parker (12 home runs, 55 RBI, .257 batting average), also contributed with both their bats and their experience. The 1988 World Series marked Don Baylor's third consecutive World Series with three separate teams. Besides being a member of the 1988 Athletics, Baylor was also a member of the 1986 Boston Red Sox and 1987 Minnesota Twins.

The Oakland pitching staff was quite possibly the best in the American League in 1988. They led in ERA (3.44), wins (104), saves (64), and were second in strikeouts (983) and second in least amount of runs allowed and home runs allowed. The ace of the staff was Dave Stewart, an ex-Dodger (1978–83), who won 20 games for the second straight season. Another ex-Dodger was reliable Bob Welch (17–9, 3.64) followed by sixteen-game winner Storm Davis. After spending the previous twelve years as a starter, mostly for the Boston Red Sox and Chicago Cubs, Dennis Eckersley would be converted into a closer in 1987 and would lead the American League in saves in 1988 with 45. He would eventually have a distinguished 24-year career, gaining election into the Hall of Fame in 2004. Another longtime starter (and another ex-Dodger), Rick Honeycutt, proved to be a capable set-up man to Eckersley, finishing with three wins and seven saves.

But anything can happen in a short series, as proven by these 1988 Los Angeles Dodgers, who out-hit (41–28, .246–.177), out-muscled (5 HRs–2 HRs), and out-pitched (2.03–3.92) the seemingly unbeatable Oakland Athletics incredibly winning the Series in five games, outscoring the A’s, 21–11, bringing Tommy Lasorda and the Dodgers their sixth World Series Championship.

In 1988, the World Series Championship was transformed into a "California Classic" as the Los Angeles Dodgers went up against the neighboring Oakland Athletics. Los Angeles had benefited from the amazing arm of Orel Hershiser who had ended the regular season with a record-breaking fifty-nine consecutive scoreless innings as well as one win and saves saves in the National League Championship Series. Oakland boasted their own ace in Dave Stewart who had won twenty-one games during the A's quest for the American League pennant (which they won by a thirteen game margin before sweeping the Boston Red Sox in the playoffs). Although relatively equal on the mound, the A's held a slight advantage at the plate after assembling the "Dynamic Duo" of Jose Canseco and Mark McGwire who combined for seventy-four home runs and two-hundred twenty-three runs batted in during the regular season. With such evenly-matched teams the Series proposed to go seven, but many experts would be surprised by the sudden outcome of the West Coast vs. West Coast affair.

Manager Tom Lasorda went with Tim Belcher in place of Hershiser for Game 1 choosing to save the right-handed ace for another day. Although he got off to a rough start, the rookie managed to work his way out of loading the bases in the first. After his teammates tagged Stewart for the 2-0 lead, Belcher repeated his folly by loading the bases again in the second. This time he wasn't as lucky as Canseco brought them all home with the fifteenth grand slam in World Series history. LA's bullpen got the call early and held Oakland at bay for the remaining innings, but the damage had already been done. The Dodgers line-up crept within 4-3 in the sixth, but still trailed by one in the bottom of the ninth with no one on. With the A's ace reliever, Dennis Eckersley (forty-five saves) on the mound Oakland figured it was over, but the resilient Dodgers weren't going down without a fight. Pinch-hitter Mike Davis managed to force a walk, but Lasorda sent in a crippled Kirk Gibson to bat for their reliever Alejandro Pena. At first, the decision appeared completely irrational, but somehow the outfielder worked past his pain and launched a bleacher blast (with a 3-2 count) for the game winning run. It was the first time a World Series game had ever been won on a come-from-behind home run in the last inning and the fact that Gibson could hold his stance, let alone swing the bat made the blast even more amazing.

Hershiser finally got his chance in Game 2 and following Gibson's inspirational lead. The Dodgers' twenty-three game winner went three-for-three at the plate and tossed a three hit masterpiece that was supported by Mike Marshall's three run homer for the 6-0 triumph. As the contest moved to Oakland, the Athletics were determined to get back in the race on the bats of McGwire and Canseco. After going 0-9 in the first two outings, "Big Mac" finally connected and broke a 1-1 tie in Game 3 with a ninth-inning homer off Los Angeles reliever Jay Howell. The controversial closer had been suspended during the championship series for using pine tar in his glove and the last-minute loss did nothing for his fading reputation. He would have his revenge the following day though as he found himself facing McGwire again in a bases-loaded mess with two out in the seventh. This time, it would be the pitcher who prevailed as he induced the future home run champ to fly-out for the 4-3 final.

Now up three games to one, the Dodgers prepared to finish their rivals in Game 5. Hershiser returned and maintained his perfect record with a brilliant four hit effort that was sweetened by nine strike outs. Mickey Hatcher set the pace for the Dodgers with a two-run shot off of A's starter Storm Davis in the first inning. The unlikely hero (who had managed one home run during the regular season) would finish the Series with two homers and a leading .368 average proving the old adage "better late than never". Another Davis, ("Mike" of the Dodgers that is...) came up huge while playing the unfamiliar role of designated hitter. Benefiting from the American League ballpark rule that allowed for a DH on both sides, the LA slugger drilled a two-run homer in the fourth en route to a 5-2 Dodger victory that wrapped up their seventh championship and sixth World Series crown. 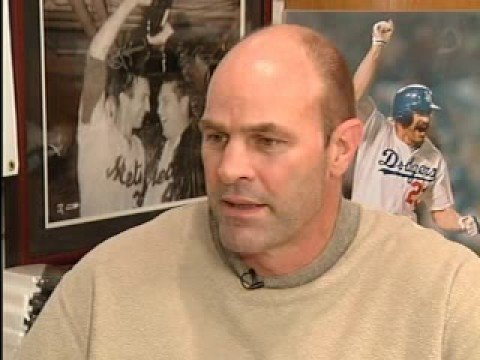