With a major label recording budget, and producer Paul Lani behind the desk, Megadeth spent five months recording their third album, So Far, So Good...

So What! The recording process was again plagued with problems from the beginning, due in part to Mustaine's ongoing battle with addiction. Mustaine later said: "The production (of So Far, So Good...) was horrible, mostly due to substances and the priorities we had or didn't have at the time". Mustaine also clashed with Lani, beginning with Lani's insistence that the drums be recorded separate from the cymbals (an unheard of process for rock drummers). During the mixing process, Mustaine and Lani had a falling out, and Lani was replaced by producer Michael Wagener, who remixed the album.


January 1988 Megadeth released So Far, So Good... So What!, and while the album was eventually certified platinum in the US, it was initially panned by critics, with Allmusic complaining that the album "lacked conceptual unity and musical bite", and that it "wants to sound threatening but mostly comes off as forced and somewhat juvenile". So Far, So Good... featured the single "In My Darkest Hour", with music written by Mustaine as a tribute to fallen Metallica bassist Cliff Burton. The song remains a fan favorite, and has been performed at nearly every Megadeth show since. So Far, So Good... also featured a cover version of the Sex Pistols' "Anarchy in the UK", with lyrics altered by Mustaine (who later admitted to hearing them wrong).

In June 1988, Megadeth appeared in Penelope Spheeris' documentary film The Decline of Western Civilization II: The Metal Years, which chronicled the Los Angeles heavy metal scene of the late 1980s, mostly focusing on glam metal. The video for In My Darkest Hour was filmed by Spheeris (who also directed the "Wake Up Dead" and "Anarchy in the UK" videos), and appears in the final scene of the movie. In Megadeth's 1991 Rusted Pieces VHS, Mustaine recalls the movie as a disappointment, which aligned Megadeth with "a bunch of shit bands".

Megadeth began their world tour in support of So Far, So Good... opening for Dio in Europe in February 1988, later joining Iron Maiden's Seventh Son of a Seventh Son summer tour in the US. Noticing problems developing with drummer Chuck Behler, Mustaine brought drummer Nick Menza in to act as Behler's drum technician. As with Gar Samuelson before him, Menza was to be ready to take over for Behler in the event that he could not continue with the tour.

In August 1988, Megadeth appeared at the Monsters of Rock festival at Castle Donnington in the UK, alongside Kiss, Iron Maiden, Helloween, Guns N' Roses, and David Lee Roth, performing to an audience of more than 300,000 people. The band was soon added to the "Monsters of Rock" European tour, but dropped out after the first show. Shortly after that appearance, Mustaine fired both Chuck Behler and guitarist Jeff Young, and canceled their scheduled 1988 Australian tour. "On the road, things escalated from a small border skirmish into a full-on raging war" he later recalled, "I think a lot of us were inconsistent (on the 1988 tour) because of the guy we were waiting for after the show".[20]

In July 1989, Nick Menza was hired to replace Behler on the drums. Unable to find a suitable lead guitarist in time, Megadeth recorded a cover version of Alice Cooper's "No More Mr. Nice Guy" as a three piece band. The version later appeared on the soundtrack to the 1989 Wes Craven horror movie Shocker. While the band was holding auditions for the new lead guitarist in the summer of 1989, Mustaine was arrested for driving while intoxicated and possession of narcotics, having crashed into a parked vehicle occupied by an off-duty police officer. He entered court ordered rehab soon after, and got sober for the first time in ten years. 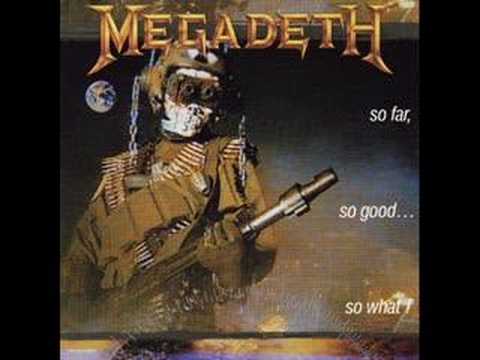 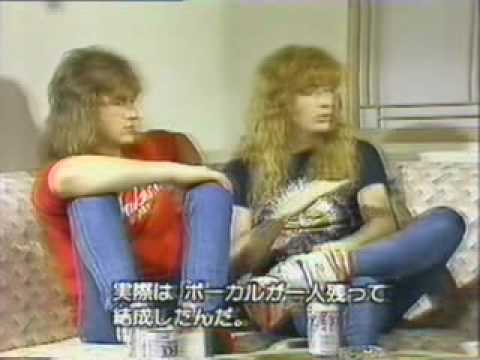