Street Fighter is Released in the Arcades

Street Fighter (ストリートファイター, Sutorīto Faitā), commonly abbreviated as SF, is a popular series of fighting games in which the players pit competitive fighters from around the world, each with his or her own special moves, against one another.

Capcom released the first game in the series in August 1987.

Street Fighter made its debut in the arcades in 1987. It was designed by Takashi Nishiyama and Hiroshi Matsumoto. The player took control of lone martial artist Ryu, who competed in a worldwide martial arts tournament, spanning five countries and ten opponents. A second player could join in at any time and take control of Ryu's rival, Ken.

The player could perform three types of punch and kick attacks (which varied in speed and strength) and three special attacks: the Hadouken, Shoryuken and Tatsumaki Senpuukyaku. These were performed by executing special motions with the controls.

Street Fighter was ported to many popular home computer systems of the time including PC. In 1988, it was released on the NEC Avenue TurboGrafx-CD console under the new name Fighting Street.

The game begins with the player being prompted to choose one of two flags (or four, depending on the dip switch settings) as the destination of their first fight. There are four countries to choose from: the US, Japan, England and China. Once a country has been selected, the player must fight against the nation's two fighters in best two-out-of-three matches. Once the player has defeated both of the nation's fighters, they must go through a bonus round before proceeding to the next country. Once all four countries have been cleared, the player character travels to Thailand for the last two opponents in the game. 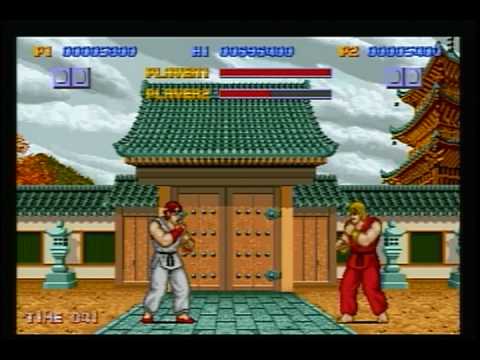