Blue Velvet is a 1986 mystery film, written and directed by David Lynch, that exhibits elements of both film noir and surrealism.

The film features Kyle MacLachlan, Isabella Rossellini, Dennis Hopper and Laura Dern. The title Blue Velvet is taken from the 1963 Bobby Vinton song of the same name. The film was highly acclaimed by critics, although initially detested by some mainstream critics; the film earned Lynch his second Academy Award nomination for Best Director. As an example of a director casting against the norm, Blue Velvet is also noted for re-launching Dennis Hopper's career and providing Isabella Rossellini a dramatic outlet beyond work as a fashion model & cosmetics spokeswoman.

Director David Lynch crafted this hallucinogenic mystery-thriller that probes beneath the cheerful surface of suburban America to discover sadomasochistic violence, corruption, drug abuse, crime and perversion. Kyle Maclachlan stars as Jeffrey Beaumont, a square-jawed young man who returns to his picture-perfect small town when his father suffers a stroke. Walking through a field near his home, Jeff discovers a severed human ear, which he immediately brings to the police. Their disinterest sparks Jeff's curiosity, and he is soon drawn into a dangerous drama that's being played out by a lounge singer, Dorothy Vallens (Isabella Rossellini) and the ether-addicted Frank Booth (Dennis Hopper). The sociopathic Booth has kidnapped Dorothy's young son and is using the child as a bargaining chip to repeatedly beat, humiliate and rape Dorothy. Though he's drawn to the virginal, wholesome Sandy Williams (Laura Dern), Jeff is also aroused by Dorothy and in trying to aid her, he discovers his dark side. As the film nears its conclusion, our hero learns that many more indivduals are tacitly involved with Frank, including a suave, lip-synching singer, Ben (Dean Stockwell), who is minding the kidnapped boy. Director Lynch explored many similar themes of the "disease" lying just under the surface of the small town, all-American façade in his later television series Twin Peaks (1990-91). ~ Karl Williams, All Movie Guide 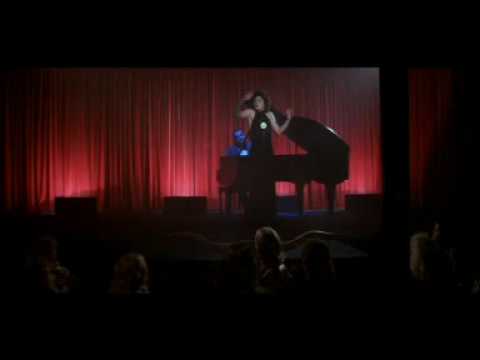