Nobody witnessed the event, but survivors in the valley below recalled hearing a rumble that lasted about 20 seconds. Evidence strongly suggested that a fountain of water and foam rose about 300 feet above the lake's surface. At one end, a wave at least 80 feet tall scoured the rocky shore.

The blast wasn't triggered by a volcanic eruption or, directly at least, any other incendiary force. Instead, it was the result of an upwelling of water laden with carbon-dioxide gas from deep in the lake. Freed of pressure keeping it in solution, immense quantities of gas simply bubbled out, dragging water with it.

Hundreds of people have been arriving in the main hospital in Yaoundé for treatment.

A doctor there said they had been poisoned by a mixture of gases including hydrogen and sulphur.

He described the symptoms, including burning pains in the eyes and nose, coughing and signs of asphyxiation similar to strangulation, as like being gassed by a kitchen stove.

Eyewitnesses described how the normally clear waters of the lake turned a reddish brown, while a sudden wind arose and whipped up huge waves.

The gas is believed to have overwhelmed at least three villages.

The entire population of one of the villages is thought to have been killed.

I could not speak. I became unconscious. I could not open my mouth because then I smelled something terrible . . . I heard my daughter snoring in a terrible way, very abnormal . . . When crossing to my daughter's bed . . . I collapsed and fell. I was there till nine o'clock in the (Friday) morning . . . until a friend of mine came and knocked at my door . . . I was surprised to see that my trousers were red, had some stains like honey. I saw some . . . starchy mess on my body.” 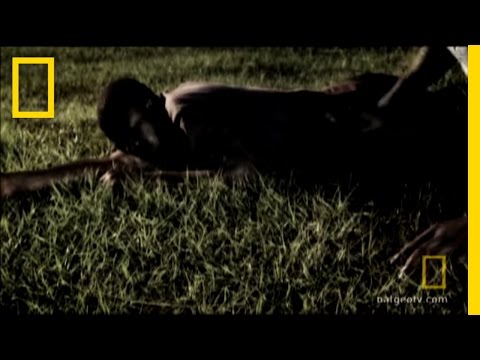