Prince Andrew and Sarah Ferguson have married at Westminster Abbey.

Thousands of people lined the streets of London and a worldwide TV audience of 500 million tuned in to catch a glimpse of the pageantry.

Miss Ferguson arrived at the 900-year-old church at 1130 BST - only a couple of minutes late - after riding from Clarence House in the Glass Coach with her father, Sir Ronald.

Inside, 2,000 people, amid 30,000 flowers, watched the bride make her four-minute walk up the blue-carpeted aisle, sweeping a 17-foot train behind her.

Prince Andrew, the Duke of York, announced his engagement to Sarah Ferguson in early 1986. Although the pair had known each other since childhood, and occasionally met at polo matches, it is understood that romance blossomed only after Princess Diana orchestrated to bring them together at a house party to celebrate Royal Ascot at Windsor Castle.

Prince Andrew proposed to Sarah at Floors Castle in Scotland, where the couple shared their first kiss, and he presented Sarah with a Burmese Ruby engagement ring.

Following a short engagement, Prince Andrew and Sarah Ferguson married at 11.30am on July 23rd, 1986 in Westminster Abbey, in front of 2000 guests, and an estimated television audience of 500 million. Following the ceremony, the couple appeared on the balcony of Buckingham Palace for a playful first kiss as husband and wife before enjoying a wedding breakfast. Later, 300 guests arrived for another wedding party at Claridges Hotel in London.

The couple honeymooned in the Azores. 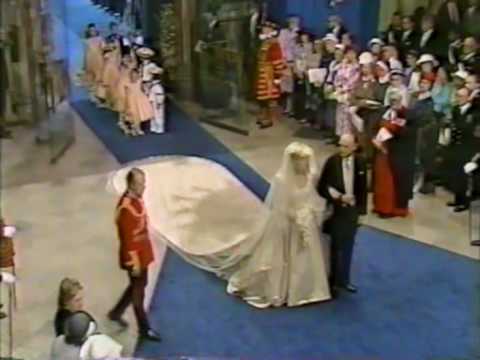