After overcoming England in controversial fashion in the quarter-finals of the 1986 World Cup, Argentina marched into the next round where they faced Belgium.

And it was a game in which the man that had been at the centre of that controversy proved his genius beyond all doubt. He scored both goals in the 2-0 win. The first was a beautiful flick over the keeper while the other was a trade mark run of world class. Receiving the ball 40 yards from goal he skips between two defenders before rounding a third and thundering the ball beyond the goalkeeper. With the magic that he displayed, even England fans considered whether to forgive him.

The FIFA World Cup™ returned to Mexico for a tournament marked by the mastery of Diego Maradona. Argentina overcame West Germany in an exciting Final but the defining match was a quarter-final against England featuring two of history's most famous goals: the 'Hand of God' followed by the dribble of a genius. Michel Platini's France again lost out in the semi-finals before beating surprise package Belgium to third place. 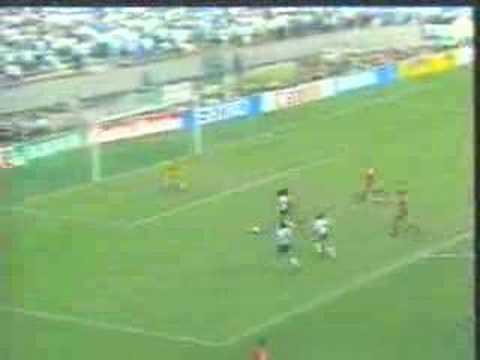