The "Hand of God" and "Goal of the Century": Diego Maradona's Goals Beat England 2-1

AKA The Hand of God and the Goal of the Century.

The Hand of God, one of the most controversial goals, was scored as the result of an illegal (but unpenalised) handball by Diego Maradona in the quarter-final match of the 1986 FIFA World Cup between England and Argentina. Five minutes later, Maradona scored another goal, the Goal of the Century, also known as “Greatest Goal in FIFA World Cup History”, was an award given for the greatest goal ever scored in a FIFA World Cup tournament. Maradona then began his 60-metre, 10-second dash towards the English goal, leaving behind five English outfield players (Hodge, Beardsley, Reid, Butcher and Fenwick) as well as goalkeeper Peter Shilton to make the score 2–0 to Argentina.

Just four minutes after the Hand of God goal, however, came The Goal of the Century, so called because it is often claimed to be the greatest individual goal of all time. Héctor Enrique passed the ball to Maradona some ten metres inside his own half. Maradona then began his 60-metre, 10-second dash towards the English goal, passing four English outfield players – Hodge, Beardsley, Butcher and Fenwick. Maradona finished the move by dribbling round Shilton to make the score 2–0 to Argentina.

I made the play to give it to Valdano, but when I got to the area they surrounded me and I had no space. Therefore, I had to continue the play and finish it myself.”

— Maradona on the Goal of the Century 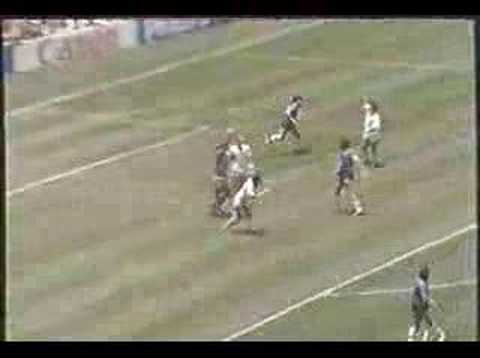