"Hannah And Her Sisters" Is Released

Hannah and Her Sisters is a 1986 comedy-drama film which tells the intertwined stories of an extended family, told over two years that begin and end with a family Thanksgiving dinner.

The movie was written and directed by Woody Allen and stars Mia Farrow as Hannah, with Barbara Hershey and Dianne Wiest as her sisters.

The film is Allen's biggest box office hit, without adjusting for inflation, with a North American gross of US$41 million. Adjusted for inflation it falls behind Annie Hall and Manhattan, and possibly also one or two of his early comedies.

A Woody Allen Manhattan mosaic, Hannah and Her Sisters concerns the lives, loves, and infidelities among a tightly-knit artistic clan. Hannah (Mia Farrow) regularly meets with her sisters Holly (Dianne Wiest) and Lee (Barbara Hershey) to discuss the week's events. It's what they don't always tell each other that forms the film's various subplots. Hannah is married to accountant and financial planner Elliot (Michael Caine), who carries a torch for Lee, who in turn lives with pompous Soho artist Frederick (Max Von Sydow). Meanwhile, Holly, a neurotic actress and eternal loser in love, dates TV producer Mickey (Allen), who used to be married to Hannah and spends most of the film convinced that he's about to die. Appearing in supporting parts are Lloyd Nolan and Maureen O'Sullivan (Farrow's real mom), as the eternally bickering husband-and-wife acting team who are the parents of Hannah and her sisters. The film begins and ends during the family's traditional Thanksgiving dinner, filmed in Farrow's actual New York apartment. Unbilled cameos are contributed by Sam Waterston as one of Wiest's brief amours and Tony Roberts as one of Allen's friends. Hannah and Her Sisters collected Oscars for Michael Caine, Dianne Wiest, and Woody Allen's screenplay. ~ Hal Erickson, All Movie Guide 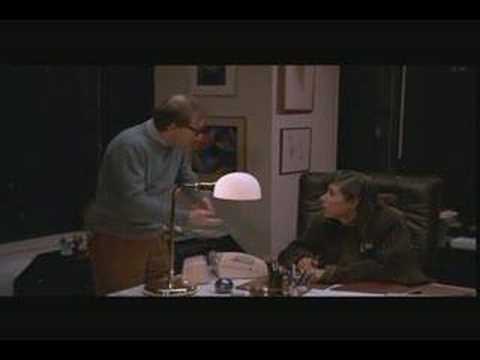