The 1985 Stanley Cup Finals was played between the defending champion Edmonton Oilers in their third-straight Finals appearance and the Philadelphia Flyers.

The Oilers would win the best-of-seven series four games to one, to win their second Stanley Cup. It was also the sixth straight Finals of post 1967 expansion teams. As of 2009, this is also the last time that a team, defending champion or finalist, would appear in the finals for the third straight season.

The 1985 final series continued to use the format of alternating locations after game two and game five, instead of the previous format of alternating after game two, game four and every game thereafter. The NHL would revert back to the previous format for the 1986 final. Wayne Gretzky scored seven goals in the five games. Grant Fuhr stopped two penalty shots.

The year is 1985. The cocky Edmonton Oilers are no longer hockey's fast rising young guns, but Stanley Cup champions. And with that came a maturity that helped make them all but invincible.

Always remembered for their incredible offense, the Oilers also played a formidable defensive game that history has always neglected. With their new found experience and unshakable confidence, there was no chance of blown leads or upsets this time around.

The Oilers steamrolled Los Angeles and Winnipeg before meeting Chicago in a memorable and high scoring Conference Finals. Jari Kurri was the star against the Blackhawks. The Oilers outscored the Hawks 43-26, with Kurri scoring 12, a NHL record for a single playoff series. Kurri was propelled by 3 shutouts in that series, another record. In total that playoffs he had 4 hat tricks, another NHL playoff record. Not surprisingly, Kurri led all players with 19 goals that post-season, tying Reggie Leach's 1976 record.

Wayne Gretzky continued to set records. He posted an unbelievable 47 points en route to capturing the Conn Smythe Trophy as playoff MVP and his second straight Stanley Cup ring. Wayne was not the only one who broke and set Cup records. Paul Coffey set defenseman scoring marks with 12 goals and 25 assists and Jari Kurri tied for most goals in a post-season with 19. The Edmonton Oilers easily triumphed over the Philadelphia Flyers in the finals, losing but one game, while outscoring them 21-14. 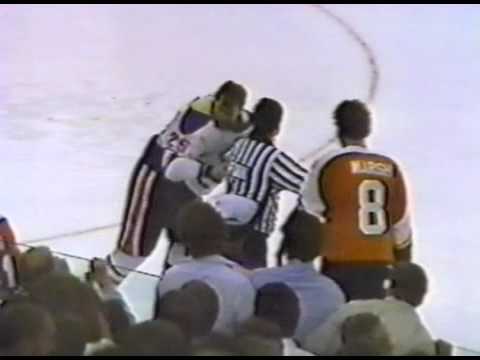