After 40 minutes of the first half, the score remained 0–0, in what was described as a drab affair with neither team threatening to score.

At 3:40 pm, five minutes before half-time, the first sign of a fire—a glowing light—was noticed three rows from the back of block G. It is believed the fire started when a spectator dropped a match, lit cigarette or tobacco, which fell through holes in the stand to rubbish which had accumulated below. One witness saw paper or debris on fire, about nine inches below the floor boards.

Spectators initially felt their feet becoming warmer; one of them ran to the back of the stand for a fire extinguisher but found none. A police officer shouted to a colleague for an extinguisher. However, his call was misheard and instead the fire brigade were radioed. The call was timed at 3:43 pm. However, the fire escalated and flames became visible, and so police started to evacuate the stand. The blaze began to spread; the roof and wooden stands were on fire. One eyewitness, Geoffrey Mitchell, told the BBC: "It spread like a flash. I've never seen anything like it. The smoke was choking. You could hardly breathe." One of the linesmen informed match referee Don Shaw, who stopped the game with three minutes remaining before half-time.

The wooden roof, which was covered with tarpaulin and sealed with asphalt and bitumen, caught fire. The material combined with a strong wind to spread the fire along the stand creating the impression of a fireball, setting fire to the entire stand. Burning timbers and molten materials fell from the roof onto the crowd and seating below, and black smoke enveloped a passageway behind the stand, where many spectators were trying to escape. It took less than four minutes for the entire stand to be engulfed in flames.

The horrific scenes of people burning alive seemed to live on in an eerie silence as daylight broke over the remains of Bradford City Football Club's ground yesterday. All that was left of the main stand were rows of bare steel and stone, with blackened timbers hanging from the few remaining roof supports. The intensity of the blaze which spread 'quicker than people could walk' destroyed the main stand area, leaving a skeleton of burned seats, lamps and fences.
People were wandering around outside the ground in disbelief, reminiscent of an air disaster, at what had happened the day before. 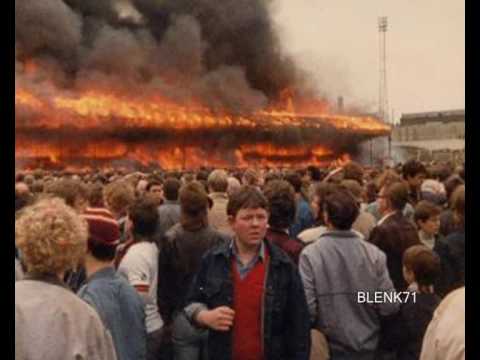