The 51st winner of the Heisman Trophy, Auburn's great running back Bo Jackson, is such a remarkable all-round athlete that, if there were Heisman awards in baseball and track, he would almost certainly have won them, too.

As the nation's premier ball carrier, Jackson was the spearhead of Auburn's return to football prominence. Under the inspired direction of Coach Pat Dye, the school has produced the best teams since the national championship days of 1957, when the revered Ralph "Shug" Jordan coached the Tigers to first place in the Associated Press poll. Jackson was the second Auburn football star to win the Heisman Trophy. In 1971, quarterback Pat Sullivan took the prize. In his freshman year Bo averaged 6.4 yards per rush, sprinted a 6.18 second-yard dash for the track team, and hit .279 as the starting centerfielder in baseball. In 1985, Jackson led the nation in all four main categories of ball-carrying as late as the eighth week of the season. At that point, he was tops in total rushing yardage, average per carry, touchdowns scored, and yards-per-game. Bo retired from baseball in 1995 and is pursuing an acting career.

Elected to the National Football Foundation and College Hall of Fame in 1999.

This was the closest of all Heisman Trophy votes as only 45 points separated the winners, Auburn running back Bo Jackson, from the runner-up, Iowa quarterback Chuck Long. Each player won three sections and finished second in the section he did not win.

Vincent Edward "Bo" Jackson (born November 30, 1962) is an American retired athlete and a former multi-sport professional. Jackson played at the highest level of sports in the United States in both American football (NFL) and Baseball (MLB).
In football, Jackson played running back for the Los Angeles Raiders of the National Football League. In baseball, Jackson played left field and designated hitter for the Kansas City Royals, the Chicago White Sox, and the California Angels of the American League in Major League Baseball.
Although a hip injury severely impaired his professional career, Jackson was the first athlete to be named an All-Star in two major sports.[1] Before his professional career, he earned the 1985 Heisman Trophy, the prize annually awarded to the most outstanding collegiate football player in the United States. He also ran a 4.12 40 yard dash, still considered the fastest verifiable 40 time at an NFL Combine.[2][3]
In 1989 and 1990, Jackson's name became known beyond just sports fans through the "Bo Knows" advertising campaign, a series of advertisements by Nike, that starred Jackson alongside Rock and Roll Hall of Fame musician, Bo Diddley, promoting a cross-training athletic shoe named for Jackson.

In June 1982, Jackson was selected by the New York Yankees in the second round of the MLB draft, but he instead chose to attend Auburn University on a football scholarship.[7] He was recruited by head coach Pat Dye and then Auburn assistant coach Bobby Wallace. At Auburn, he proved to be a tremendous athlete in both baseball and football. 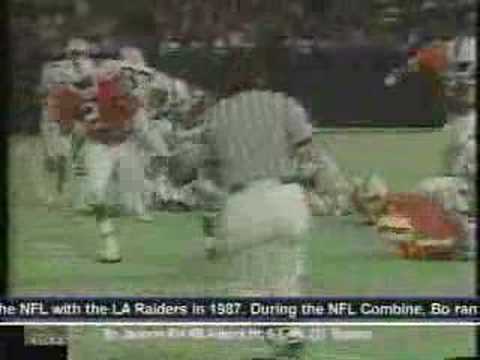 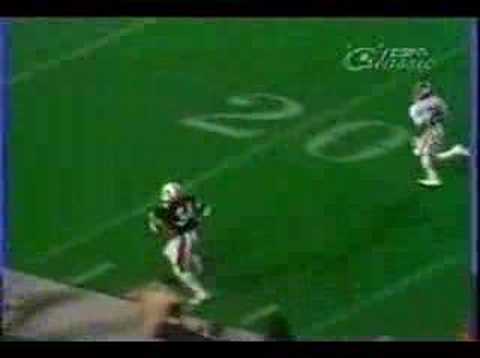