The Armero tragedy (Spanish: Tragedia de Armero) was the major consequence of the November 13, 1985 eruption of Nevado del Ruiz in Tolima, Colombia.

Lahars (mudslides) from the mountain's melting ice cap swept down its slopes. One covered the town of Armero and killed most of its population, over 20,000 people out of 29,000 inhabitants. Deaths in other towns, particularly Chinchina, brought the overall death toll to 23,000. Footage and photos of Omayra Sánchez, a young victim of the tragedy, were published around the world.

Geologists and other experts had warned authorities and media outlets about the danger over the weeks and days leading up to the eruption. When interviewed by reporters, a number of different officials told the inhabitants that the city was safe and downplayed the possible effects, possibly due to the cynicism created by previous false evacuation orders. The night before the explosion, the mayor of Armero himself assured citizens that there was nothing to fear.

A small Plinian eruption of the Nevado del Ruiz volcano in Colombia ejected 3.5 x 1010 kilograms of mixed dacite and andesite tephra on 13 November 1985, with a maximum column height of 31 kilometers above sea level. Small pyroclastic flows and surges, generated during the initial stage of the eruption, caused surface melting of approximately 10% of the volcano's ice cap, leading to meltwater floods. The erosive floods incorporated soils and loose sediments from the volcano's flanks and developed into lahars, which claimed at least 25,000 lives.

Accounts from survivors indicate Armero was inundated with several pulses of flowing material. The first arrived at 11:25 p.m. and consisted of a flood of cold relatively clean water that overflowed the Río Lagunillas channel, sweeping into downtown Armero. Only a few centimeters deep in town, this water was from a lake located just upstream that had been displaced when lahars entered the lake.

The second pulse arrived at 11:35 p.m. This was the largest pulse and within 10 to 20 minutes, destroyed most of the buildings and swept away most of the people in Armero. Flow depths of the lahar ranged from 2 to 5 m.

The third pulse arrived at 11:50 p.m. with a velocity of about half of the second one. Then, in the next hour or so, a series of smaller pulses (6 to 8) was experienced by survivors trapped in the mud. These pulses lifted people floating in the mud and pushed them a few meters ahead.

One last pulse struck Armero a short time after 1 a.m. on November 14. 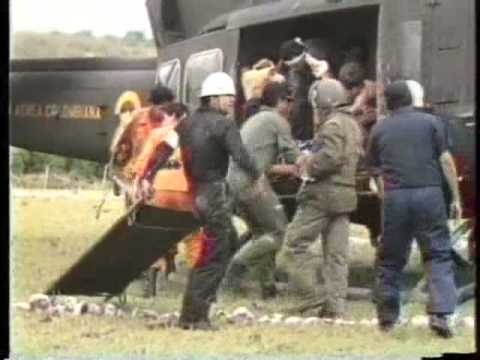