Flutie played college football at Boston College, and played professionally in the National Football League, Canadian Football League, and United States Football League. He first rose to prominence during his career at Boston College, where he received the prestigious Heisman Trophy and the Davey O'Brien National Quarterback Award in 1984. His Hail Mary touchdown pass in a game against Miami on November 23, 1984 (dubbed "Hail Flutie") is considered among the greatest moments in college football and American sports history.[1] Selected as the 285th pick in the 11th round, Flutie is the lowest drafted Heisman Award winner among those who were drafted. Flutie played that year for the New Jersey Generals of the upstart United States Football League. In 1986 he signed with the NFL's Chicago Bears, and later played for the New England Patriots, becoming their starting quarterback in 1988.

Flutie played football for Boston College, the only Division I-A school to recruit him, from 1981 to 1984, and won the Heisman Trophy and the Davey O'Brien National Quarterback Award in his senior year (1984). Flutie became the first quarterback to win the Heisman since Pat Sullivan in 1971. He gained national attention in 1984 when he quarterbacked the Eagles to victory in a high-scoring, back-and-forth game against the Miami Hurricanes (led by QB Bernie Kosar). The game was nationally televised on CBS the day after Thanksgiving and thus had a huge audience. Miami staged a dramatic drive to take the lead, 45-41, in the closing minute of the game. Boston College then took possession at its own 22-yard line with 28 seconds to go. After two passes moved the ball another 30 yards, only 6 seconds remained. On the last play of the game, Flutie scrambled away from the defense and threw a Hail Mary pass that was caught in the end zone by Gerard Phelan, giving BC a 47-45 win. Although many people think that play clinched the Heisman Trophy for Flutie, the voting was already completed before that game.[6]
Flutie left school as the NCAA’s all-time passing yardage leader with 10,579 yards and was a consensus All-America as a senior. He earned Player of the Year awards from UPI, Kodak, The Sporting News and the Maxwell Football Club.
In addition to his collegiate athletic achievement, Flutie maintained a distinguished academic record at Boston College. He was a candidate for a Rhodes Scholarship, for which he was named a finalist in 1984.[citation needed] Upon graduating, Flutie won a National Football Foundation post-graduate scholarship. His number, 22, has been retired by the Boston College football program.
Flutie's 1984 Hail Mary pass, and the subsequent rise in applications for admission to Boston College, gave rise to the admissions phenomenon known as the "Flutie Effect." This idea essentially states that a winning sports team can increase the recognition value of a university enough to make it a more elite school.[7]
Twenty-four years later in November 2008, Doug Flutie was honored by Boston College with a statue of his famous Hail Mary pass to Gerard Phelan to beat Miami.

Flutie's career at Chestnut Hill saw him become the all-time total offense leader in the game, surpassing the record of BYU's Jim McMahon. At a mere early doubters who questioned whether he was big enough to play in the big leagues of college football. Douglas S. Looney, resident college football expert at Sports Illustrated, wrote, "Little Flutie is far bigger than merely the best Eagle of all time. He's on the threshold of being the best New England college football player ever." And Tim Cohane, longtime sports editor of Look, and a football historian who has seen all the great ones going back more than half-a-century, added that Flutie is the most exciting New England player since Albie Booth of Yale in 1929-31. "Flutie," observes Looney "has three things going for him on the football field: spontaneity, brains, and optimism." In 1992, he was named the MVP of the Grey Cup and led his team to the Western Division finals in 1993. Flutie was a six-time Canadian Football League Outstanding Player of the Year, three-time Grey Cup Most Valuable Player and the first CFL player to throw for 6,000 yards in one season. After playing in the Canadian Football League for seven years, Flutie returned to the NFL. In 1999, Doug led the Bills to the playoffs and was named as an alternate to the Pro-Bowl. He launched his autobiography, "Flutie" in Junior. He established Doug Flutie, Jr. Foundation for Autism in honor of his son. He's currently playing for the New England Patriots.

Doug Flutie of Boston College was a runaway winner, his 678 first place votes and 2,240 points overall was the fifth highest total in Heisman Trophy history. 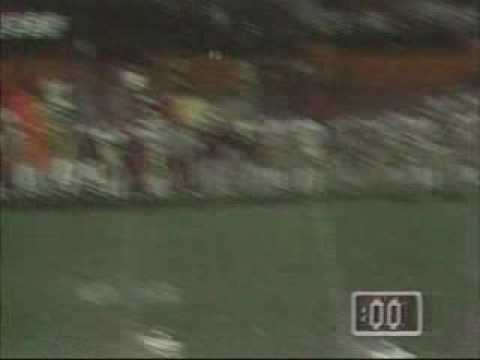