On 31 December 1984, on the way to a New Year's Eve party at his family's home in Sheffield, England, 21-year-old Allen was driving his Chevrolet Corvette when an Alfa Romeo passed him.

Allen claims that the driver had been egging him on and that he would not allow him to pass. In his rage to pass this driver, he became reckless, did not see a turn up ahead and lost control of his car, which sailed over a stone wall and into a field. He was thrown from the car, with his left arm severed because the seatbelt was not properly fastened. The car ended up upside down, with his girlfriend Miriam Barendsen secure in her seat. She was not seriously injured and found Allen in the field. They were helped by a passerby who was a nurse, and Allen was taken to a hospital. Doctors initially reattached Allen's arm, but because of infection it was removed again. He left the hospital three and a half weeks later and was back with Def Leppard in the Netherlands two weeks after getting out of the hospital with recuperation expected to last six months.

Allen thought that he could not continue drumming for Def Leppard and became very depressed, so Def Leppard's lead singer, Joe Elliott, stopped by to see Allen in an attempt to cheer him up. Soon after, Elliott and Allen sat down with some engineers and started to design a drum set to assist Allen's drumming. After all of this, he could still play some drum beats with one hand, using his left foot (typically for hi-hat pedals in common drumsets), to play the snare drum. Former Status Quo drummer Jeff Rich was a source of help and encouragement during Allen's convalescence, and they designed an electronic kit Allen could play using only one arm. (The Ludwig acoustic drum kit he used on earlier albums High 'n' Dry and Pyromania was later given away by Def Leppard's onetime management.) Electronic drum manufacturer Simmons created a kit to their specifications, and Allen made his post-accident debut in 1986 with a well-received set at the "Monsters of Rock" festival at Castle Donington. In August 1987, the band released their fourth album, Hysteria, which, after a relatively slow start in the U.S., ultimately became another huge success, selling over 20 million copies worldwide. 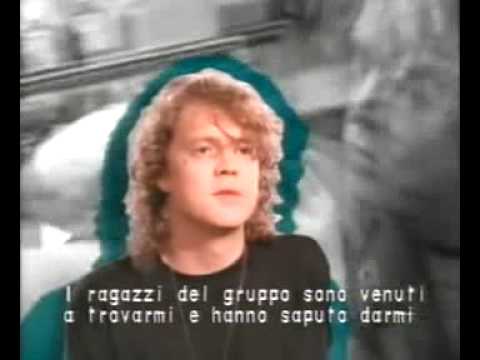