"The Flamingo Kid" Is Released

The Flamingo Kid is a 1984 comedy film directed by Garry Marshall, written by Marshall, Neal Marshall and Bo Goldman.

It stars Matt Dillon, Richard Crenna, Hector Elizondo and Janet Jones. It is a coming-of-age movie about a working class boy who takes a summer job at a beach resort and learns valuable life lessons.

It was the first movie to receive a PG-13 rating, although it was the third to be released with that rating, after Red Dawn and Dreamscape.

Tagline: A legend in his own neighborhood

Set in 1963, The Flamingo Kid finds 18-year-old Brooklynite Matt Dillon, the son of blue-collar Hector Elizondo, getting a taste of the Good Life by joining several of his friends at "El Flamingo", a swank Long Island beach club. Wealthy car salesman Richard Crenna, the uncle of Matt's girl friend Janet Jones, befriends the boy and takes him under his wing. Thanks to Crenna's influence, Matt secures a good job at the Flamingo. The boy is bedazzled by Crenna's sumptuous lifestyle, and most especially by the older man's reputation as the Flamingo's reigning gin rummy champ. Dillon begins taking on airs, which alienates his down-to-earth father. Watch for a scene in which, while channel-surfing with his new remote control, Richard Crenna watches a fleeting clip from the old TV sitcom The Real McCoys--featuring Richard Crenna. ~ Hal Erickson, All Movie Guide 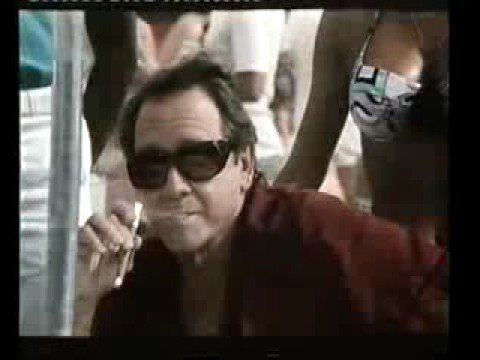