"The Killing Fields" Is Released

The Killing Fields is a 1984 British film drama about the Khmer Rouge regime in Cambodia.

It is based on the experiences of three journalists: Dith Pran, a Cambodian, Sydney Schanberg, an American, and Jon Swain, a journalist from the UK. The film, which won three Academy Awards, was directed by Roland Joffé and stars Sam Waterston as Schanberg, Haing S. Ngor as Dith Pran, Julian Sands as Jon Swain, and John Malkovich as Al Rockoff. The adaptation for the screen was written by Bruce Robinson and the soundtrack by Mike Oldfield.

The Killing Fields is a romanticized adaptation of an eyewitness magazine story by New York Times correspondent Sidney Schanberg. Covering the U.S. pullout from Vietnam in 1975, Schanberg (Sam Waterston) relies on his Cambodian friend and translator Dith Pran (Haing S. Ngor) for inside information. Schanberg has an opportunity to rescue Dith Pran when the U.S. army evacuates all Cambodian citizens; instead, the reporter coerces his friend to remain behind to continue sending him news flashes. Although his family is helicoptered out of Saigon (a recreation of the famous TV news clip), Dith Pran stays with Schanberg on the ground. Racked with guilt, Schanberg does his best to arrange for Dith Pran's escape, but the Cambodian is captured by the dreaded Khmer Rouge. Accepting his Pulitzer Prize on behalf of Dith Pran, Schanberg vows to do right by his friend and extricate him from Cambodia. The rest of the film details Dith Pran's harrowing experiences at the hands of the Khmer Rouge, and his attempt to escape on his own. The Killing Fields won Academy Awards for Hang S. Ngor (a Cambodian doctor who lived through many of the horrific events depicted herein), cinematographer Chris Menges, and editor Jim Clark; an Oscar nomination went to Roland Joffe, who made his directorial debut with this film. Spalding Gray, who played a small role in the film, later elaborated on this experiences in his one-man stage presentation Swimming to Cambodia. ~ Hal Erickson, All Movie Guide 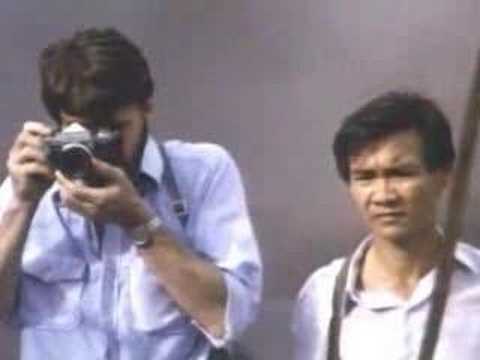