Nicorette gum is used as an aid in smoking cessation.

It works by providing low levels of nicotine, which may help you to quit smoking by lessening the physical signs of withdrawal symptoms.

Nicorette gum contains nicotine, the primary ingredient in tobacco products. It provided nicotine levels lower than those associated with smoking.

Nicorette® Gum helps calm your withdrawal symptoms when you're trying to quit smoking. When you stop smoking, the sudden removal of nicotine from your system lowers your dopamine levels, making you feel moody and irritable.

Nicorette Gum provides a controlled amount of nicotine to your system at a slower, less intense pace than cigarettes and without the toxins in cigarette smoke. It's a temporary therapeutic aid that reduces withdrawal symptoms. Your body gradually adjusts to having less nicotine until you no longer need any. By helping to relieve cravings, Nicorette lets you focus on disrupting the patterns that link cigarettes to so many of your daily activities.

Great tasting, easy-to-chew and sugar-free, Nicorette Gum can double your chances of successfully quitting smoking. When used as directed you even can use an extra piece to handle strong or frequent cravings. Choose from six great tasting flavors: White IceTM Mint, Cinnamon SurgeTM, Fruit ChillTM, FreshMintTM, Mint and Original.

Nicorette is the brand name of a pharmaceutical preparation that contains nicotine for the treatment of tobacco dependence. Nicorette was the first medicinal preparation to facilitate smoking cessation.

Nicorette chewing gum was developed by Ove Fernö at the pharmaceutical company Leo in Helsingborg, Sweden, following an idea from two physicians, Stefan Lichtneckert and Claes Lundgren, at the Institute of Physiology, University of Lund, Sweden. They suggested the development of a pure nicotine product to be used when periods of forced abstinence from smoking cause nicotine withdrawal symptoms; for example, the crew in submarines experience difficulties concentrating and irritation when they are unable to smoke.

The nicotine from Nicorette replaces some of the nicotine the smoker previously got from tobacco smoke; this relieves some of the craving and withdrawal symptoms, and allows the ex-smoker to concentrate on overcoming the habitual action of smoking. Nicotine is the addictive component in cigarette smoke and the reason for smoking, but the harm caused by smoking is due to other components in the smoke such as tar, carbon monoxide and other gases.

The full dose of Nicorette should be used for about eight weeks, and then the dose can gradually be reduced before treatment stops. 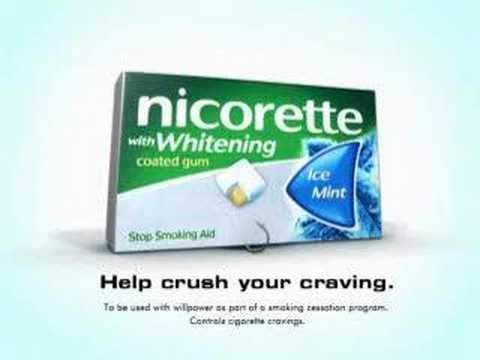