Fifth Avenue was a name used by Chrysler Corporation on its largest models from 1979 to 1993.

The title "Fifth Avenue" refers to a street in New York City, New York in the US. Fifth Avenue contains many upscale shops and cultural attractions.
The name first appeared as a special, upmarket sub-model of the R-Body Chrysler New Yorker sedan in 1979. This generation of Chrysler, although already smaller than its maximum size in the mid 1970s, was still V8-powered and rear wheel drive. The R-body rode on a 118.5 inch wheelbase, which was still considerably longer than its downsized GM and Ford competitors. Ordering the New Yorker Fifth Avenue Edition package got the buyer a car finished in two-tone beige with matching leather interior. There was a standard landau vinyl roof, and somewhat unusual opera windows which opened with the rear doors. The package was so thoroughly color-keyed that even the bumper rub strips were beige. This body ran for three years, although additional Fifth Avenue colors were added for 1980 and 1981.
The R-Body New Yorkers and Fifth Avenue's are now considered to be one of the most attractive of all Chryslers, and have been garnering collector interest. Over all production of the R-Body cars was low (less than 40,000: 79-81) and the Fifth Avenue production was at most 25% of them. Sadly very few exist today, in any condition. Approximately 14 were stretched into limo's and provided for use during the 1980 winter Olympics in Lake Placid, NY. A few still exist and are in the hands of collectors.
In 1980, a Fifth Avenue package was created by ASC (American Sunroof Corporation) for the Chrysler LeBaron, which shared its Chrysler M platform with the Dodge Diplomat. This rare option package, produced on 654 LeBarons for the year, included many of the exterior features found on the New Yorker Fifth Avenue in a smaller, more sensible package.

With the R-body out of production and the LeBaron name transferred to the Chrysler K platform, the New Yorker was downsized again for 1982, becoming a mid-size model. The Fifth Avenue option was still available as a $1,244. option package. It was adapted from the earlier LeBaron's package, with a distinctive vinyl roof, electro-luminescent opera lamps, and a rear fascia adapted from the Dodge Diplomat, albeit modified. Interiors featured button-tufted, pillowy seats covered in either "Kimberley velvet" or "Corinthian leather", choices that would continue unchanged throughout the car's run, the carpets were thicker, and the interior had more chrome trim. The Fifth Avenue option also included illuminated entry, AM/FM stereo with a rear amplifier, power door locks, power 6-way driver's seat, power antenna, remote trunk release, dual side mirrors, full undercoating, passenger vanity mirror, tape stripes, locking wire wheel covers, as well as a standard 5.2L (318 in³) V8 engine. 1982 would be the first year M-body coupes and wagon would no longer be made, and would be the last year for the optional AM/FM 8-track stereo, and AM/FM stereo with integrated CB. The exterior of a Fifth Avenue Edition New Yorker can be indentified from a regular New Yorker by the following: opera lights, hood stripes, and Fifth Avenue Edition badges on roof.

For 1983, the New Yorker and the Fifth Avenue diverged. The New Yorker was downsized yet again, and became a front-wheel drive car equipped with a four-cylinder engine. The previous car was now called New Yorker Fifth Avenue, this would be the last year M-bodies were made in Canada and the last year for the optional "Chronometer" glovebox mounted clock, 1983 was also the last year the 225 Slant-six engine was offered, as well as all analog tuned radios and chrome trim pedals.
For 1984 it was simply called Fifth Avenue. The rear-wheel drive Fifth Avenue would continue for six successful years and would prove to be the last V8-powered, rear wheel drive Chrysler until the Chrysler 300 was revived in that configuration for 2005. All Fifth Avenues from 1984 to 1989 were powered by a 5.2 L (318 in³) V8 engine, with either a two barrel carburetor making 140 hp or a four barrel rated at 170 hp, mated to Chrysler's well-known Torqueflite three speed automatic transmission. As this was the largest Chrysler model available, (and combined with a badly botched downsizing of the large Cadillacs, Buicks and Oldsmobiles) sales took off, especially during 1985-86, when over 100,000 were made each year.
The Fifth Avenue also far outsold its Dodge Diplomat and Plymouth Gran Fury siblings, with a much greater proportion of sales going to private customers, despite its higher price tag. This came as a pleasant surprise to Chrysler, for the Fifth Avenue's bodyshell dated back to the 1977 LeBaron and the majority of its engineering dated back to the 1976 Plymouth Volare.
Although it takes a trained eye to catch changes in the M-body Fifth Avenue, there were a few during its six-year run:
1984 - New Yorker badge replaced by Fifth Avenue badge on trunklid; "Fifth Avenue Edition" badge continues on the rear doors, a new steering wheel was added. The regular Pentastar was replaced a crystal one and was now used on the hood ordiment and steering wheel this would continue through the end. Wiper arms were now black (instead of silver) Engine blocks were also now painted black (previous ones were painted light blue) Optional 10 spoke alloy "Road Wheels" were replaced with new optional "Snowflake" alloy wheels.
1985 - New black gearshift knob introduced (1982 to 1984 models have chromed knobs). Turn signal lever is now also black (1984 and below models were interior color keyed) with the exception of models with two-tone paint
1986 - New-style ignition key and center high-mounted stop lamp (the latter a federal mandate) introduced. Models with two-two paint had lower roof lines. Hood badge/decal changed from chrome Chrysler star to clear plastic Chrysler Star.
1987 - New steering wheel, last year alloy wheels, two-tone paint, and rear stereo amplifier were offered. Also the last year for 17-ounce deep-pile carpeting and the last year the radio, headlight switch and climate controls were silver.
1988 - Vinyl roof restyled; lower edge of sail panel covering extended below chrome window sill moldings. "Fifth Avenue Edition" badge replaced by a crystal Pentastar surrounded by a gold wreath. Driver's side seat now had a manual recliner (previous models had 6-way power adjusters, but no recliner). Front headrests were more cushioned. Door panels are restyled and new power mirrors are standard. Overhead console became available. Driver's side airbag became optional in May of that year
1989 - Driver's side airbag is standard. At the time the Fifth Avenue (as well as its M body twins) was one of the only cars that offered an airbag with a tilt steering wheel.

Leather seats and penta-star hood ornament do not a luxury car make. TheChrysler Fifth Avenue is ample evidence of that.
The `88 Fifth Avenue has become the `89 until production stops at Kenosha in December. The rear-wheel-drive luxury model gives way to a front-wheel-drive replacement in 1990, built off the C-body New Yorker. The `90 FifthAvenue, with a new Chrysler-built, 3.3-liter V-6, will be assembled inBelvidere.

Nice while it lasted, since every Fifth Avenue built and sold the lastfew years brought about $5,000 profit into the Chrysler treasury. In thatrespect, the car surely will be missed.

It took a long time cranking before the 318 V-8 came to life. When itdid, it hesitated before responding to pedal command. That comes with age.Vinyl landau roof treatments were nice in the `70s, until people realized how much cleaning they require and how poor they look when torn or faded.

What`s a luxury car without power seat controls? But what are power seatcontrols when buried under the armrest so you have to open the door to pushthe button and move the seat back?

In one concession to modern times, an air bag was made standard for theremainder of the model run. 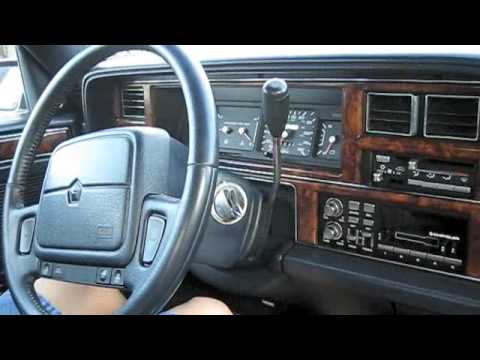