The Chrysler Executive was a car offered by the American automobile producer Chrysler from 1983 through 1986.

The Executive was a stretched version of the Chrysler LeBaron aimed at the then booming market segment of limousines. The Executive and Cadillac´s Series 75 were the only factory-offered limousine models during the mid-1980s. The two original 1982 Chrysler Executive prototypes were finished in dark red with matching vinyl tops, and red cloth interiors. Although fully functional, these two vehicles were for promotional use only and were used in various car shows.
There were two distinct Executive models on different wheelbases:
Four-door, five-seat Executive Sedan on a wheelbase of 124" (1983 and 1984 only), and
Four-door, seven-seat Executive Limousine riding a wheelbase of 131" (model years 1983 to 1986).
All Executives were built by conversion specialist ASC near St. Louis, Missouri, and began as standard LeBaron coupes. Standard front doors (from LeBaron sedans) were utilized, while the rear doors were individually fabricated using the rearward-half of the coupe door. Interiors were available in navy blue cloth or leather (available at extra charge), or powder gray cloth. 1983 interiors were only available in "Kimberly" cloth (a short-nap velour) upholstery, leather upholstery was an option starting in '84. Limited colors were available for 1983. For 1984 and on, standard exterior colors were black, medium blue, dark blue, white, charcoal (discontinued after 1984) and silver. Standard vinyl roof coverings matched the body color, while the interior panels were all covered in cloth - even if leather seating was ordered.
Power came from the Mitsubishi-sourced 2.6 L G54B I4 engine in 1984 and 1985; for 1986 Chrysler's own turbocharged 2.2 L four-cylinder engine was used. Both engines were only available with a 3-speed automatic transmission.
The Executive Sedan was, simply, a stretched LeBaron that held a center console between the front seats. The console held duct work for the two rear seat air conditioning vents. The Executive Limousine (option code A-89) had a thick center divide behind the front seats that held a glass divider with power sliding center panel (controlled from the passenger-side switch panel), two upholstered jump seats (without seat belts), five air conditioning vents (with flow controlled by a switch on the rear passenger-side door), an illuminated storage compartment with a flip-down door, and an AM/FM stereo with cassette (separate from the driver's sound system) controlling the four rear speakers. Above the divider glass was a "glamour module" lighting unit - with overhead lights for the console, as well as individual reading lamps for the two jump seats. Once the rear doors were closed, the lamps located in this overhead console would slowly theatre-dim before turning off. Executive Sedans had a similar lighting feature, in the form of a small single lamp located above each rear door. Both Sedan and Limousine models had adjustable rear-seat headrests, two-position foot rests, rear quarter reading lamps, and pillar mounted assist straps. Production figures are as follows:
1982 (prototype) - Limousine: 1, Sedan: 1
1983 (limited production) - Limousine: 2; Sedan: 9
1984 (regular production) - Limousine: 594; Sedan: 196
1985 (regular production) - Limousine: 759
1986 (limited production) - Limousine: 138
For 1983, the Executive used the standard LeBaron grille (as shown on the 1982 prototype models as well), while 1984 and 1985 utilized a slightly more vertical waterfall grill (borrowed from the New Yorker) that featured a heavier cap and narrow chrome extensions running beneath the headlights. 1984 and '85 models also received wrap-around tail lamps (from standard LeBaron models), versus the envelope styling on the 1983. For Executive's final year, the 1986 models used the re-designed LeBaron tail end, featuring new tail lamps and deck lid. Up front, Executive still utilized the New Yorker grille but the front fender-mounted cornering lamps were discontinued.

In 1984, Chrysler brought out unlikely luxury cars — the Chrysler Executive Sedan and Limousine, stretched-wheelbase K-cars with New Yorker styling up front and Reliant styling in back. The goal, according to Chrysler’s 1984 launch materials, was to attract “very affluent, status-oriented buyers seeking traditional limousine characteristics in a modern, efficient size.” No doubt they looked at the downsizing of the luxury market and made some quick projections of future trends.

These vehicles were unique, but Chrysler wrote that “they may be compared to luxury vehicles like the Cadillac Fleetwood Sedan and Limousine.” They also compared the pair favorably with the Lincoln Continental and Mercedes-Benz sedans, while noting its attractive pricing and “the advantages of Chrysler Corporation manufacturing, quality, warranty, and nationwide service.” They were all made at the St. Louis assembly plant, which was also making the LeBaron coupes and convertibles.

The Sedan was rated at five passengers, the Limousine at seven; both had a standard three-speed automatic and 2.6 liter Mitsubishi engine with carburetor, a drivetrain that would be their downfall. In 1984, Chrysler had no V6 or turbocharged four, and the smallest V8 — the 318 still used in the Fifth Avenue — was far too large for the engine bay. The 2.2 turbo finally appeared in the final year of the Limousine.

The sedan lasted two years, while the limousine lasted four. Bob Wilson noted that Bob Marcks presented the idea to Robert Lutz, who approved it. Details are at Bob's web site (see below). Bob Wilson noted:

They were discontinued because they were not “real” limos in the sense that you could not carry three people in the back seat and two more for the jump seats, despite the fact that they were rated by the EPA as a seven-passenger car. The jump seats had no seat belts.

The pair were both stretched coupes, and kept the opera windows in the C-pillar. Styling was essentially that of the extended-K platform LeBaron coupe and sedan. We have never seen one at a car show.

It's 1984 and you're an automotive manufacturer. Due to Reagan's tax cuts, the rich are richer than ever before, and they need ways to show off their wealth to their neighbors, to their coworkers, to their spouses, and to their mistresses. They're looking for Conspicuous Consumption, with capital Cs, and they're now looking at limousines to provide it.

Usually, this isn't an issue--you would take a huge car in your arsenal, stretch it out, and you're good to go. However, after ten years of high gas prices and non-existent demand, you've been forced to cut your large car production. You're also no dummy--you know that even if gas prices lower to 1969 levels, people aren't clamoring for a return of the likes of the old Impala, nor even the Cordoba. So, from where you're sitting, making a large car and then turning it into a limousine is a non-starter; there's just no way you're going to sell enough of them to break even on this. But, if you're not going to build a large car, how are you going to get into this newly lucrative market?

If you're Lee Iacocca, you do what you always do--you throw a K-Car at the problem and hope it goes away. That brings us to today's Car Lust-the 1984-86 Chrysler Executive. The Chrysler Executive was a hilariously ill-conceived notion of a car that was based on a less-hilariously ill-conceived notion of a car--the early '80s Chrysler LeBaron. The LeBaron was, like so much of Mopar's lineup of the time, a K-Car; albeit a relatively upscale one. The goal was to provide a personal luxury car that fit the more fuel-miserly sensibilities of the time.

For whatever reason, Chrysler decided the way to make that happen was to take the Plymouth Reliant and give it better seats and more conservative styling (think about that for a minute). Apparently, this worked well enough that, over time, Chrysler thought it was a good idea to try that same formula for "success" to churn out an "Italian luxury coupe" and to "resurrect" the Imperial brand. Those two travesties of automotive hubris would have to wait, however, for the Chrysler Executive to run its course.

The Executive was based on a fully appointed LeBaron, which meant that, instead of being equipped with the 82-horsepower 2.2-liter four cylinder that Dodge threw in just about everything, it came with the more "upscale" hemi-head Mitsubishi 2.6. One of the interesting side-effects is that this means the Executive technically did, in fact, have a "Hemi," even if it was a four-cylinder only good for 114 horsepower. Being a limousine, it would have been uncouth to equip it with a manual transmission, so Chrysler spared no expense and threw in the same 3-speed automatic they threw into every other K-car. 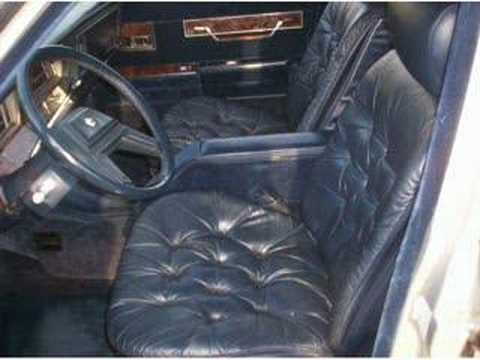