Playing at New York's Yankee Stadium, the Royals were trailing 4-3 with two outs in the top of the ninth and U. L. Washington on first base.

In the on-deck circle, George Brett was heard remarking to a teammate, "Watch this baby fly" as he shook his bat. He then came to the plate and connected off Yankee reliever Rich "Goose" Gossage for a two-run home run and a 5-4 lead.

As Brett crossed the plate, New York manager Billy Martin approached rookie home plate umpire Tim McClelland and requested that Brett's bat be examined. Earlier in the season, Martin and other members of the Yankees had noticed the amount of pine tar used by Brett, but Martin had chosen not to say anything until the home run. One of the Yankees, third baseman Graig Nettles, recalled a similar incident involving Thurman Munson in a 1975 game against the Minnesota Twins. [1] According to Nettles' autobiography, Balls, Nettles claims that he actually informed Martin of the pine tar rule, as Nettles had previously undergone the same scrutiny with his own bat while with the Twins.

With Brett watching from the dugout, McClelland and the rest of the umpiring crew inspected the bat. Measuring the bat against the width of home plate (which is 17 inches), they determined that the amount of pine tar on the bat's handle exceeded that allowed by Rule 1.10(b) of the Major League Baseball rule book, which read that "a bat may not be covered by such a substance more than 18 inches from the tip of the handle."
The baseball bat used by Kansas City Royals third baseman George Brett in the Pine Tar Incident on July 24, 1983.

McClelland searched for Brett in the visitors' dugout, pointed at him, and signaled that he was out, his home run nullified and the game over. An enraged Brett stormed out of the dugout to confront McClelland, and had to be physically restrained by Kansas City manager Dick Howser and his teammates. (As one commentator stated, "Brett has become the first player in history to hit a game-losing home run.") Despite the furious protests of Brett and Howser, McClelland's ruling stood. 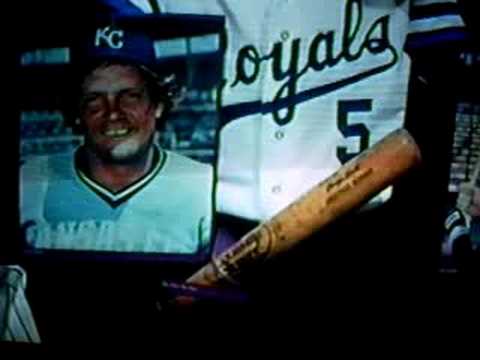