Under Chun's leadership, Seoul cautiously promoted a peaceful dialogue with North Korea and encouraged the expansion of northsouth contacts in the early 1980s; P'yongyang remained uninterested in these overtures and on at least two occasions perpetrated terrorist attacks that increased tension on the Korean Peninsula. The primary purpose of South Korean peace proposals in 1981 and 1982 was to realize a summit meeting between Chun and North Korean president Kim Il Sung. South Korean leaders hoped that the establishment of a government-to- government dialogue would lead to agreements reducing the size of the armed forces of both countries and establishing the framework for a peace plan to replace the 1953 armistice.

In October 1983, a P'yongyang-directed terrorist attack resulted in the cessation of the peace process. A bomb that exploded in Rangoon, Burma, killed twenty-one people, including seventeen high-ranking officials of the South Korean government then visiting Burma. The bombing was planned and executed by personnel drawn from North Korean army units. Chun's decision not to retaliate with force set a precedent that won him praise from abroad and sympathy for his unpopular regime at home. Seoul's reliance on diplomatic and economic measures to counter terrorism rather than a small-scale attack on a North Korean target, which could be used as an excuse for beginning an all-out war, effectively mobilized international public opinion to limit trade and other contacts with North Korea.

On October 9, 1983, President Chun Doo Hwan was on an official visit to Yangon, the capital of Myanmar. During the visit, he planned to lay a wreath at the Martyr’s Mausoleum, to commemorate Aung San, who founded the independent Myanmar and was assassinated in 1947. As some of the president’s staff began assembling at the mausoleum, one of three bombs concealed in the roof of the memorial exploded. The huge blast ripped through the crowd below, killing 21 people and wounding 46. Among the dead were the Korean foreign minister, Lee Bum Suk, the economic planning minister and deputy prime minister, Suh Suk Joo, and the minister for commerce and industry, Kim Dong Whie.[citation needed] The rest of those killed were presidential advisers, journalists, and security officials, most of them South Korean; however, four Burmese nationals were also among the dead. President Chun was saved because his car had been delayed in traffic and was only minutes from arriving at the memorial. The bomb was reportedly detonated early because the presidential bugle which signalled Chun's arrival mistakenly rang out a few minutes early.

Police identified three suspects as an army major and two captains. One was shot to death two days after the bombing; suspect Kang Min-chul and the other remaining suspect tried to commit suicide by hand-grenade that same day, but survived, although Kang lost an arm. Kang confessed his mission and links to North Korea, an action by which he was able to avoid a death sentence and instead received life imprisonment. His colleague was executed by hanging. North Korea denied any links to Kang, who was sent to the infamous prison at Insein, north of Yangon 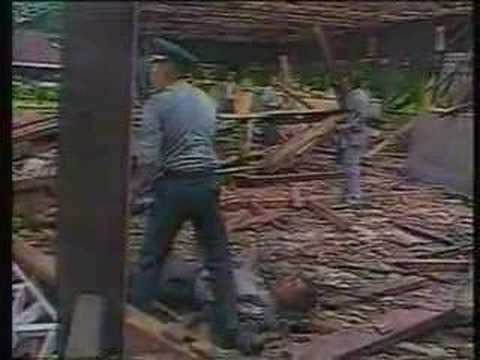