"The Right Stuff" Is Released

The Right Stuff is a 1983 American film adaptation of Tom Wolfe's 1979 book The Right Stuff about the test pilots who were involved in high-speed aeronautical research at Edwards Air Force Base as well as those selected to be astronauts for Project Mercury, the United States' first attempt at manned spaceflight. The story contrasts the "Mercury Seven" and their families with pilots like Chuck Yeager, who was considered by many test pilots to be the best of them all, but was never selected as an astronaut. The Mercury Seven were Scott Carpenter, Gordon Cooper, John Glenn, Gus Grissom, Wally Schirra, Alan Shepard, and Deke Slayton. In some aspects of the film its creators undertook great efforts to make it historically accurate. In others, they took some artistic freedom, downplaying and sometimes ridiculing the collective scientific and technical effort of the Mercury program, emphasizing instead the individual adventure and heroism of the test pilots and astronauts.

Covering some 15 years, The Right Stuff recounts the formation of America's space program, concentrating on the original Mercury astronauts. Scott Glenn plays Alan Shepard, the first American in space; Fred Ward is Gus Grissom, the benighted astronaut for whom nothing works out as planned; and Ed Harris is John Glenn, the straight-arrow "boy scout" of the bunch who was the first American to orbit the earth. The remaining four Mercury boys are Deke Slayton (Scott Paulin), Scott Carpenter (Charles Frank), Wally Schirra (Lance Henriksen) and Gordon Cooper (Dennis Quaid). Wolfe's original book related in straightforward fashion the dangers and frustrations facing the astronauts (including Glenn's oft-repeated complaint that it's hard to be confident when you know that the missile you're sitting on has been built by the lowest bidder), the various personal crises involving their families (Glenn's wife Annie, a stutterer, dreads being interviewed on television, while Grissom's wife Betty, angered that her husband is not regarded as a hero because his mission was a failure, bitterly declares "I want my parade!"), and the schism between the squeaky-clean public image of the Mercury pilots and their sometimes raunchy earthbound shenanigans. ~ Hal Erickson, All Movie Guide 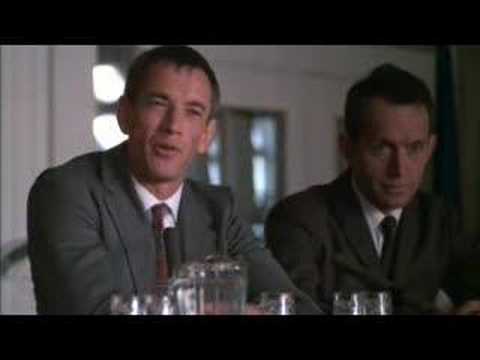