The Porsche 956 was a Group C sports-prototype racing car built by Porsche in 1982 for the FIA World Sportscar Championship.

Built to comply with the championship's new Group C regulations which were introduced in 1982, the car was a replacement for Porsche's successful 936 model which competed in the previous Group 6 category of the World Championship. The project began in June 1981, and the first prototype chassis was completed on March 27, 1982, in time for the beginning of the World Championship season. Jürgen Barth tested the first chassis at Porsche's private test track.

An improved chassis with better fuel efficiency from a Bosch Motronic electric system was developed for 1984, being termed the 956B. In total, twenty-eight 956s would be built by Porsche from 1982 to 1984, with an unofficial 29th chassis built from spare parts by Richard Lloyd Racing.

In 1983, 956 chassis #107 was used by Porsche as a testbed for their P01 Formula One engine, later badged as TAG and used by McLaren. The car was able to test some of the characteristics of a Formula One car in order to develop the engine.
The 956 would be officially replaced by the Porsche 962 in 1985, an evolution in the 956's design.

The 956 made its debut at the Silverstone 6 Hour race, the second round of the World Championship for Makes with Jacky Ickx and Derek Bell driving for the factory. After missing the following round at the 1000 km Nürburgring for developmental reasons, the Ickx/Bell unit reappeared at the 24 Hours of Le Mans. They led the race for the entire 24 hours, eventually taking the overall win - their third win together. As they had already won in 1981 with a Porsche 936 that had used an early version of the 956 engine, their car had start number 1. The two other factory 956 followed them, so the three factory Porsches finished 1-2-3 in the order of their starting numbers.
Boosted by this success, Porsche sold customer versions of the 956 to privateer teams such as Joest Racing, Obermaier Racing, John Fitzpatrick Racing, Richard Lloyd Racing, Kremer Racing and Brun Motorsport who raced them independently of the factory.

The overall all-time lap record for the demanding 20 km Nürburgring-Nordschleife circuit in the Eifel Mountains has been achieved during the qualifying session for the 1983 1000 km Nürburgring, by Stefan Bellof, who drove his 956 around in 6 minutes 11.13 seconds, at an amazing average speed (considering the difficulty of the track layout) of 202 km/h (126 mph). The race lap record is held by the same Bellof, during the 1983 1000 km Nürburgring, the lap being clocked at 6:25.91.

Nine five six. Of all the numbers that define Porsche’s phenomenal record in motorsport, this one is arguably the most remarkable. It belongs to the car that did it all for Porsche when, after the FIA’s radical re-writing of the World Endurance Championship rules in 1982, there was everything to do. It did it all for Derek Bell, too. ‘What can I say about the car that set me up for life?’ the five-times Le Mans winner told us when we spoke to him shortly after this studio shoot. Quite a lot, as it turned out.

Porsche had dominated international sportscar racing through the second half of the ’70s but, at the end of the ’81 season, the 935 and 936 that had been virtually untouchable in the Group 5 and Group 6 classes were rendered obsolete overnight by the new system of Group A, B and C classes. Groups A and B required a limited production run for eligibility but Group C was for prototypes regulated by a set of dimensions and, more controversially, the amount of fuel that could be used per race, effectively capping the engine’s performance potential.

Some manufacturers might have regarded this as a setback but Porsche, not untypically, saw it as an opportunity to pull further ahead of the opposition. The 956 was the first all-new Porsche racer in over a decade and, apart from sharing its turbocharged, aluminium flat-six engine, marked a dramatic departure from the 936, parts of which dated back to the late ’60s.

It wasn’t just the new aluminium monocoque, with its front and rear subframes, that set the 956 apart, since much of the competition had moved to a monocoque structure as well. What made the difference was Porsche’s attention to detail, especially in aerodynamics. The rear coil-spring/damper units for the all-round double wishbone suspension, for instance, were mounted on top of the gearbox to keep them out of the airflow. Where Porsche levered in a real advantage, though, was with ground effects. The new Group C cars would be allowed to have some ground effect but, to prevent this becoming extreme, the regulations stated that between the front and rear axles the bottom of each car should be completely flat. They didn’t stipulate what should happen behind that. So Porsche fitted the 956 with large venturis (air tunnels) starting just behind the mandatory flat section and angled steeply back through the tail as they passed alongside the slightly upwardly-tilted flat-six engine and five-speed gearbox. In conjunction with the simple but effective Kevlar-reinforced plastic body, the 956 generated over three times more downforce than the 917, making it the first true ground-effects Porsche.

The 956 was designed and built by Porsche System at Zuffenhausen under the guidance of Norbert Singer. To improve fuel consumption, its 2649cc flat-six engine ran smaller turbos than in the ’81 936, with the boost set at a relatively modest 1.1 bar, but it still developed 620bhp in race trim. From the outset, the objective was to win Le Mans but it was agreed that 1982 was to be a development year for the car. Derek Bell recalls the first race, the Six Hours at Silverstone: ‘Everyone asks if it was a job coming to terms with ground effect, and I have to say I didn’t really notice it unduly. You gradually went faster and faster. And then you stopped and someone else drove for an hour and so on. I think the fact we were doing a shakedown – just five laps and in – meant we never got round to feeling tired.

‘But the car itself was just phenomenal. When we went to that first race in May at Silverstone, Jackie (Ickx) went out and did a 1:15.3 or something, which put us on pole, about a second ahead of the Group 6 Lancias. And then, on race morning, [director of racing] Peter Falk came up to me and said “you are not going to win the race”. And this coming from Porsche – usually so quietly confident. I asked what he meant, and he said “well, we didn’t calculate on the fuel”.

‘Jackie had never done a fuel stint before. Nor had I. So he went out and did the first hour and then came in and Falk said to me, ‘Derek, you’ll have to start lapping in 1:21s or you’ll run out of fuel’. So I’m cruising round Silverstone in fifth gear and downshifting for the chicane and Becketts, just to try and salvage a position at all. It was the most desperate way to go racing and I was very outspoken afterwards. It was never really written that Porsche had made “a bit of an error”, only that it used the race to “calibrate fuel consumption”. And, of course, they soon got it right. But, at that point, it was a major cock-up. With hindsight, of course, it was an outstanding FIA regulation. It helped cause one of the very rare spin-offs from motor racing that goes into road cars. It improved fuel consumption by 20 per cent. Instead of 4mpg we got 5.’

After that early mistake and defeat by the quick but frequently unreliable Lancias, the 956, Ickx and Bell hardly ever looked back. In the following four years, the 956 notched up four consecutive outright victories at the Le Mans 24 Hours and dominated international sportscar racing. As well as speed and reliability, the 956 also had numbers on its side. A total of ten works cars was supplemented by no fewer than 16 sold to private teams.

The IMSA GTP championship in the USA was also a natural battleground for the 956, being all but identical to Group C. Where it differed was in its stricter pedal-box regulations, of which the 956 fell foul. So Porsche took the next evolutionary step, the 962, which went on to dominate IMSA and also won Le Mans twice more, extending Porsche’s unbeaten run to six. (There was another win, too, in 1994, for the Dauer 962.)

But what was the 956/62 like to drive in the heat of battle? A brutal workout by reputation. Bell again: ‘I mean, we had no power steering. Whenever it got pushed back into the garage I literally had to slip my seat belts, lean forward and grab the wheel, with my chest against it, just to turn it. The effort was massive. Of course at the time I didn’t know any different because I hadn’t driven anything with power steering. And on a warm day it could reach 150 degrees in the cabin. It was very, very debilitating, to be honest. So consequently, during a 24-hour race, you got exhausted.

‘But it was the most fantastic car to attack with. The handling balance was mild understeer developing to a touch of oversteer when the power really came on, because you basically had a solid rear diff. And later, with 800 horsepower, the car could drift a bit.’

It could also lap the Nürburgring faster than anything else. The late Stefan Bellof’s time of 6 minutes 11 seconds has never been bettered and still amazes Bell, who knows as well as anyone what a handful the 956 could be at the Ring: ‘We should never have gone there with the 956 but it was the last year and I was excited about going there because I was always quick at the Ring. Anyway, we went out and the car would grip the road and then you’d come to a little bump or a knoll and the whole thing would break away and you’d go up in the air – it felt like about six feet. It would grip, grip, grip then bang, it would break away. It was hideous. And I’ll never forget the bit up from where Niki Lauda had his terrible crash, the long hill after Adenau Bridge. You went all the way up the hill tacking like a yacht. It was quite unbelievable. It gripped and banged and gripped and banged and you’d go “oh my god” and your head was up bashing the roof.

‘Stefan was amazing. I must never take away what he did. That was uninhibited youth. He was flying, completely in control of what he was doing, although he was a bit out of control in his mind, charming and lovely kid as he was. I always felt he needed someone to control him. He was a wonderful talent and he needed to be nurtured, he needed to be controlled – and he would have been magnificent.’ 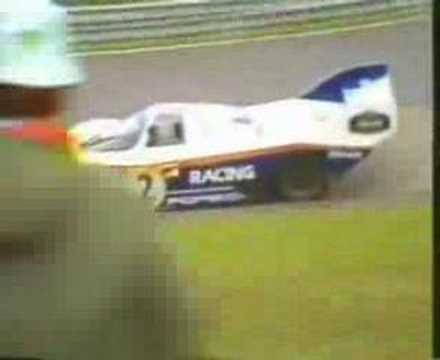