The Ford EXP and Mercury LN7 were the first two-seaters that Ford offered in 25 years.

The coupes shared the wheelbase and mechanicals of the Ford Escort with a longer, more stylish body. It was first shown at the Chicago Auto Show and introduced in April 1981 as an early 1982 model.
Comparing the EXP to the original Thunderbird, Ford Division General Manager Louis E. Latalf said: "We’re introducing another two-seater with the same flair, but the EXP will be a very affordable, very fuel efficient car matched to the lifestyles of the eighties."
Ford's marketing strategy at the time was based on their perception of American lifestyle in the early 1980s. Ford felt that the growing number of one and two person households, combined with the lifestyle of the younger target audience who desired a small sporty car, led them to the conclusion that Americans wanted a "lively little car that is dependable, efficient, and good-looking".

Ford's feeling was that if a customer wanted room for four or five passengers, they would buy an Escort or a Fairmont. The marketing philosophy for the EXP's seating was rather like that of a European grand tourer; a personal vehicle for two, with a cargo area in back for emergency transport of anything or anyone else. While it was moderately successful in sales for a two seater, it not only lacked performance but its styling still described as "a sound beating with the ugly stick ... unbelievably awkward, oddly proportioned lines and a curious headlight treatment". Although the EXP still has its fans, it never gained the cult following of cars such as the Pontiac Fiero or Toyota MR2 which were built and styled around their own unique platforms. It ultimately would be dropped in favor of the 2+2 Ford Probe.

For a long time, some were adamant that the letters stood for "EXPerimental"; others said that Ford marketing executives just thought it was an interesting combination of letters that did not have a meaning. However, according to an article published in Popular Mechanics (March 1981), the letters EXP were supposed to stand for Erika Project Personal car, where project cars are designated X. The "Erika" came from the code-name from the European Escort.

There had been a push by automobile manufacturers around the world to make small, fuel efficient cars. This was precipitated by the OPEC oil embargo of October 17, 1973–1974. This embargo included a 70% increase in oil prices, causing long lines at gasoline filling stations, and sky-rocketing prices for gasoline. People wanted, demanded more miles for their gasoline dollars. Ultimately this led Detroit, Tokyo and Germany to rethink the adage that "bigger is better".
The world would respond with smaller cars. Relations with the middle-east did not improve very much during Jimmy Carter's presidency 1977-1981 and a population wanting fuel efficient automobiles continued. Ford studied a two seater commuter car called the Super Gnat. It was to have a three-cylinder engine with a wheelbase of just 78 inches. Ford also produced as a concept the Mustang RSX, which was a slightly smaller two-seat derivative of the Mustang.
Lee Iacocca leadership at Ford had previously introduced one of its most successful cars, the Mustang. The Mustang [1964 ½] originally was no more than a Falcon with a different, more sports-car like body. Similarly, Ford would adapt their newest economy cars, the Ford Escort and Mercury Lynx by putting a sporty body on top and removing the rear seats to produce the EXP and LN7.
The EXP's rakish non-boxy body rode on the Escort's 94.2 inch (2393 mm) wheelbase, with that car's front-wheel drive running gear, four-wheel independent suspension, and dashboard. The EXP was longer, lower, and sportier than the Escort.
Performance wasn't the car's strong suit however, since the EXP weighed about 200 pounds more than Escort but carried the same small 1.6 L CVH I4 engine rated at 70 hp (52 kW) and a standard 4-speed IB4 manual transaxle. Nevertheless, the March 1981 issue of Car and Driver reported that their EXP with a manual transmission reached 44 MPG on the highway, a figure comparable to modern hybrid cars.
Both the Ford EXP and the Mercury LN7 had a sharply-sloped windshield, wheel arches with prominent lips, and wide body side moldings not far below the top of the wheel well. The biggest difference was the rear fascia.
The EXP was a notchback with a lift-up hatch, while the LN7 used a big "bubbleback" back window. The EXP's minimalist grille consisted merely of twin horizontal slats on the sloped front panel (the LN7 had ten).
Priced considerably higher than the Escort, the EXP carried an ample list of standard equipment. It included power brakes, tachometer, engine gauges, full carpeting, electric back window defroster, power hatchback release, a digital clock, and a cargo area security shade. Models with a manual transmission had a sport-tuned exhaust. Automatic models had a wide-open throttle cutout switch for the optional air conditioning compressor clutch.
As the full 1982 model year began, Ford offered an optional (at no extra cost) 4.05:1 final drive for better performance. Later came a close-ratio transmission with 3.59:1 final drive ratio intended for the same purpose.
Finally, in March 1982, an 80 hp (59 kW) version of the CVH engine became available. It had higher (9.0:1) compression, a larger air cleaner intake, lower-restriction exhaust, a dual-outlet exhaust manifold, larger carburetor venturis, and a higher-lift camshaft.
The two-seater LN7 never had found enough customers and dropped out after 1983 due to sluggish sales. Many of the LN7's distinct styling characteristics, such as the "bubbleback" window, were later adopted to the EXP's design.

The Ford EXP and the similar Mercury LN7 were three-door hatchbacks based on the Ford Escort and Mercury Lynx. Both models were introduced in 1981 as 1982 models and used a 1.6 L 4-cylinder engine rated at 70 hp (52 kW), later upped to 80 hp (59 kW). The EXP was also Ford's first two-seater since the 1957 Ford Thunderbird. The EXP lasted until mid-1988, but the LN7 was gone after the 1983 model year. The only difference between the two was that the LN7 had a 10-slat grill while the EXP's grill has 2 slats. The LN7's hatchback also featured a compound rear window while the EXP had a notchback-style hatchback. After the LN7 was discontinued, the EXP received the LN7's compound rear window.
In 1984, the Turbo Coupe was introduced and came with a turbocharged version of the 1.6 L engine, rated at 120 hp (89 kW). The EXP was briefly discontinued from April 1985 to mid-1986 due to its questionable styling and less than adequate performance. In mid-1986, the redesigned EXP appeared with flush-mounted headlights instead of the "frog-eye" headlights the original EXP had, and was now known as the Escort EXP. Sport Coupes came with a 1.9 L engine rated at 106 hp (79 kW), while Luxury Coupes had a 1.9 L engine with throttle-body injection rated at 90 hp (67 kW). The last Sport Coupe was produced in 1987 and featured a 1.9 L engine with multi-port fuel injection. That increased the 1.9's power rating to 115 hp (85 kW).
The EXP was discontinued in October 1988 to make way for the upcoming Ford Probe. 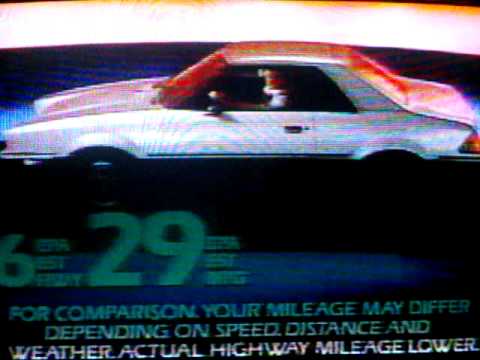