The Islanders would win the best-of-seven series four games to none, to win their third straight and third overall Stanley Cup. This is also the most recent time that a Stanley Cup Champion has three-peated.

Vancouver, despite having a losing record in the regular season, defeated the Calgary Flames 3–0, the Los Angeles Kings 4–1 and the Chicago Blackhawks 4–1 to advance to the finals. This was their first Finals appearance.
New York defeated the Pittsburgh Penguins 3–2, the New York Rangers 4–2, and the Quebec Nordiques 4–0 to make it to the finals for the third year in a row

The Canucks had their best chance to win a game in the first one, as a Jim Nill short-handed marker gave them a 5–4 lead with only seven minutes to play in regulation time. However, the Islanders tied it when Mike Bossy banged home a loose puck after goaltender Richard Brodeur had collided with his own defenceman, Harold Snepsts, while trying to smother it. In the dying seconds of the first overtime period, Snepsts attempted to clear the puck up the middle, but it was intercepted by Bossy, who completed his hat trick with two seconds left on the clock to win the game for the Islanders. In game two, the Canucks led 4–3 after two periods, but the Isles came back to win again.
The series then shifted to Vancouver, where the Canucks were boosted by a boisterous, towel-waving Vancouver crowd and had a great first period, but failed to score on Billy Smith, who was brilliant. The Islanders went on to win 3–0, and then completed the sweep with a 3–1 victory on May 16 to win their third straight Cup, ending any hopes that Vancouver could continue their Cinderella run.
Mike Bossy scored 7 goals in the four games and won the Conn Smythe Trophy.

On May 16, 1982, the New York Islanders became the first team from the United States to win three consecutive Stanley Cups. The Isles' Mike Bossy tied the record for most goals in the finals tallying seven in the four-game sweep of the Vancouver Canucks. Goaltender Billy Smith tied his own record with 15 wins in a playoff and Bryan Trottier amassed 23 playoff assists in 19 games breaking his own record for the second straight season. Bossy was awarded the Conn Smythe Trophy. The regular season was the Islanders best, dominating the National Hockey League with 54 wins. 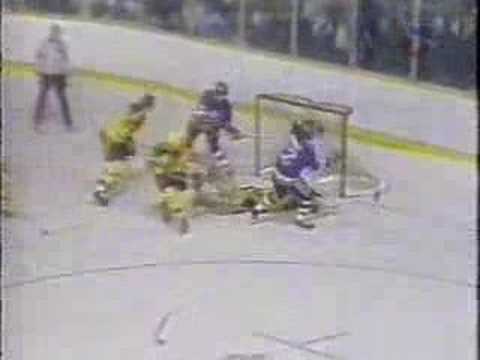 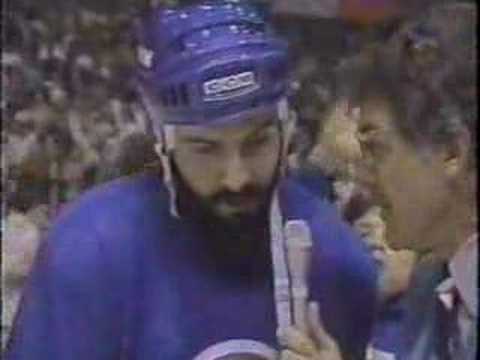