Diner is a 1982 comedy-drama film written and directed by Barry Levinson which along with Avalon, Tin Men, and Liberty Heights constitutes his series of "Baltimore films". Diner is the first film Levinson directed.

His screenplay was nominated for an Academy Award.

Set in Baltimore in 1959, Diner tells of the story of a group of male, high school friends, now in their twenties, who reunite for the wedding of one of their group. The title refers to the Fells Point Diner, the group's regular late-night hangout. The semi-autobiographical film explores the changing relationships among these friends as they become adults through what is mostly a series of vignettes rather than a traditional narrative. Much of the film is unscripted, Levinson preferring to use ad libbing to capture naturalistic camaraderie on the screen.

The film inspired a television pilot that aired on CBS in 1983 written and directed by Levinson. Mike Binder starred as Eddie, Paul Reiser returned as Modell, Michael Madsen took over as Boogie and James Spader was Fenwick.

Writer-director Barry Levinson's autobiographical first feature fondly remembers his Baltimore youth. It's late 1959, and six guys in their early twenties are stumbling into adulthood, alternating responsibility with carefree time at their local diner. The story centers on the return from college of Billy (Tim Daly) to serve as best man at the wedding of his pal Eddie (Steve Guttenberg). Billy is consumed by a confusing relationship with a close female friend, while Eddie still lives at home, preparing a football trivia test for his fiancée and vowing to cancel the wedding if she fails. Other characters woven into the narrative include Boogie (Mickey Rourke), a womanizer with a gambling problem, and Shrevie (Daniel Stern), a music addict with a troubled marriage. Diner became known for its bittersweet comic screenplay and its remarkable cast, which also included Paul Reiser, Kevin Bacon, and Ellen Barkin. In order to capture the loose, laid-back dialogue of the diner scenes, Levinson directed them last, so that the actors would be more comfortable with each other. Diner was the first part of Levinson's "Baltimore Trilogy," followed by Tin Men (1987) and Avalon (1990). ~ Norm Schrager, All Movie Guide 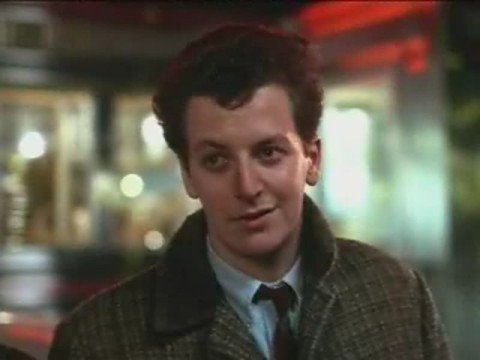