In terms of death and injuries the Tacoa disaster was the worst oil-storage fire in history.

More than 150 people perished, including 53 firefighters, 14 electric-company workers, and ten journalists and TV crewmen. About 300 more people were burned or injured. Of the bodies found in the vicinity of the burning tank, many charred beyond recognition, most could be identified only by their dental work and the metal objects they wore. Some could not be identified at all. Even the fillings in their teeth had melted. The remains of other people known to have been at the fire were never found. They either lie in the sea or were incinerated to ash.

Property losses reached more than $20 million. More than 60 vehicles and a helicopter were reduced to twisted heaps of melted metal. All that remained of the fire trucks were their asbestos hoses and the metal cleats of the firemens’ shoes. Some 70 homes burned down or were badly damaged.

Suddenly, at 5:45 a.m., the top of the tank blew off with a shattering roar. Only one-third full with 3.5 million gallons of heavy fuel oil, the tank burst into flames, sending dense black smoke hundreds of feet into the air. The two men on the tanker were killed. Alzaul, on the ground, barely managed to escape.”

One of the tanks, number 8, exploded and ignited owing to causes that are still not known. At the time of the explosion fuel was being transported from an oil tanker, and there were two workers on the roof of the tank. The fire brigade arrived, and managed to bring the fire fully under control within two hours. Journalists approached tank 9, which was located further down at the end of a slope. Tacoa is located in a mountainous location, with houses on both sides of the mountain.

At 12:30 the water supply failed. The fire reintensified. The residues of tank 8 began to pour out over tank 9: a BOILOVER was taking place.

Suddenly, a huge explosion occurred. A ball of fire shot towards the sky and spread out over a radius of 1000 m. Everybody in the surrounding area was trapped by the volcano of fire. The ball of fire rose up the sides of the mountain, destroying everything in its wake. 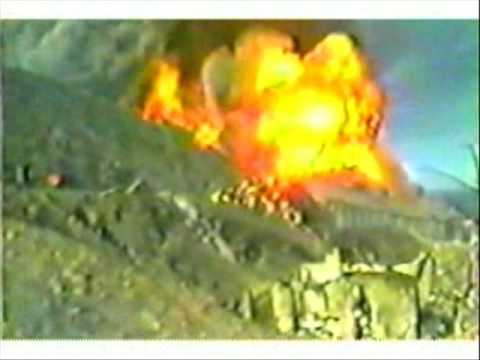