Ronald Reagan Becomes the Republican Candidate for the 1980 Presidential Election

Ronald Reagan, the 33rd Governor of California, announced his candidacy for President of the United States in New York City on November 13, 1979.

On July 17, 1980, he became the nominee of the Republican Party for the 1980 presidential election. After receiving the Republican nomination, he selected one of his primary opponents, George H. W. Bush, to be his running mate.

On November 4, 1980, Reagan carried 44 states with 489 electoral votes to win the election. Jimmy Carter, the incumbent president, carried six states (and Washington, D.C.) with 49 electoral votes. Reagan won 50.7 percent of the popular vote while Carter took 41 percent, and Independent John B. Anderson (a liberal Republican) received 6.7 percent. Reagan's constitutional election to the office was completed with the meeting of the Electoral College on December 15, 1980[4] and with the subsequent certification of the college's vote by Joint Session of the United States Congress on January 6, 1981. Based on the results of the electoral vote count, Ronald Reagan was declared the elected-President of the United States and George H. W. Bush was declared officially as the elected-Vice President of the United States in the 1980 presidential election.

End of the primaries

On May 20, 1980, after the Michigan and Oregon primaries, Ronald Reagan secured enough delegates to clinch the nomination for the Republican Party. His opponent in the general election, incumbent President Jimmy Carter, passed the delegate threshold to become the presumptive nominee of his party on June 3. On May 26, George H. W. Bush, Reagan's remaining opponent in the quest for the Republican nomination, conceded defeat and urged his supporters to back Reagan.

Who would be Ronald Reagan's vice presidential running mate had been a subject of speculation since the end of the primaries. When former President Gerald Ford revealed in a CBS interview with Walter Cronkite that he was seriously considering the vice presidency, Ford garnered a great deal of interest. However, after Ford suggested the possibility of a "copresidency" and, in addition, insisted that Henry Kissinger be re-appointed as Secretary of State and that Alan Greenspan be appointed as Secretary of the Treasury, negotiations to form a Reagan-Ford ticket ceased. A dismayed Reagan then telephoned George H. W. Bush less than twenty-four hours before Reagan formally accepted the Republican nomination to inform Bush of Reagan's intent to nominate him. The following day, July 17—the final day of the Republican National Convention—Reagan officially announced Bush as his running mate.

The 1980 Republican National Convention convened at Joe Louis Arena in Detroit, Michigan. The convention was centered on the theme "Make America Great Again;" Reagan accepted the Republican nomination on the final day of the convention:

"With a deep awareness of the responsibility conferred by your trust, I accept your nomination for the presidency of the United States. I do so with deep gratitude, and I think also I might interject on behalf of all of us, our thanks to Detroit and the people of Michigan and to this city for the warm hospitality they have shown. And I thank you for your wholehearted response to my recommendation in regard to George Bush as a candidate for vice president."

Weeks before the election, Reagan trailed Carter in most polls, most notably the Gallup poll on October 26 which placed Jimmy Carter at 47 percent and Ronald Reagan at 39 percent. Following his sole debate with President Carter on October 29, Reagan overcame the largest deficit since Gallup polling began in 1936, and within one week, the Associated Press reported that the race remained "too close to call." Three weeks before the election, Yankelovich, Skelly and White, produced a survey of 1,632 registered voters showing the race almost dead even, as did a private survey by Caddell. Two weeks later, a survey by CBS News and The New York Times showed a similar situation. Some pollsters at that time, however, were getting results that showed a slight Reagan lead. ABC News-Harris surveys, for example, consistently gave Reagan a lead of a few points until the climactic last week of October.

Through the 1970s, the United States underwent a wrenching period of low economic growth, high inflation and interest rates and intermittent energy crises.[10] Reagan was an adherent of supply-side economics, which argues that economic growth can be most effectively created using incentives for people to produce (supply) goods and services, such as adjusting income tax and capital gains tax rates. Accordingly, Reagan promised an economic revival that would affect all sectors of the population. Reagan theorized that cutting tax rates would actually increase tax revenues because the lower rates would cause people to work harder as they would be able to keep more of their money.

Reagan called for a drastic cut in "big government" programs and pledged to deliver a balanced budget for the first time since 1969. In the primaries, Bush famously called Reagan's economic policy "voodoo economics" because it promised to lower taxes and increase revenues at the same time. 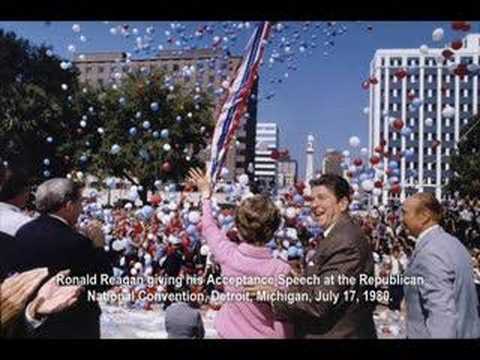