It began on March 6, 1980, and ended with the championship game on March 24 in Indianapolis, Indiana. A total of 48 games were played, including a national third place game.
Louisville, coached by Denny Crum, won the national title with a 59-54 victory in the final game over UCLA, coached by Larry Brown. Darrell Griffith of Louisville was named the tournament's Most Outstanding Player.
Structurally speaking, this was the first tournament of the modern era. For the first time:
1. An unlimited number of at-large teams could come from any conference (From 1975-1979, conferences were only allowed one at-large entry).
2. The bracket was seeded to make each region as evenly competitive as possible (previously, geographic considerations had trumped this).
3. All teams were seeded solely based on the subjective judgment of the committee (in 1979, seeding was also partially based on the prior performance of a conference winner's conference).
In the second year the tournament field was seeded, no number one seed reached the Final Four. This would not happen again until 2006.
UCLA would later forfeit their place in the standings after players representing the school were declared ineligible by the NCAA.

Darrell Griffith poured in 23 points in guiding Denny Crum's Louisville Cardinals to their first NCAA crown in school history. The senior Griffith - who was nicknamed Dr. Dunkenstein - teamed with four underclassmen as the "Doctors of Dunk" in knocking off UCLA 59-54 in the final at Market Square Arena in Indianapolis. 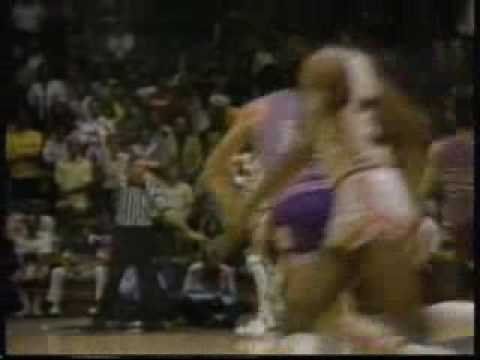