On the morning of 8 December 1980, photographer Annie Leibovitz went to Ono and Lennon's apartment to do a photo shoot for Rolling Stone.

She had promised Lennon a photo with Ono would make the cover, but initially tried to get a picture with just Lennon alone. Leibovitz recalled that "nobody wanted [Ono] on the cover". Lennon insisted that both he and his wife be on the cover, and after shooting the pictures, Leibovitz left their apartment. After the photo shoot Lennon gave what would be his last ever interview to San Francisco DJ Dave Sholin for a music show on the RKO Radio Network. At 5:00 p.m., Lennon and Ono left their apartment to mix the track "Walking on Thin Ice", an Ono song featuring Lennon on lead guitar, at Record Plant Studio.

As Lennon and Ono walked to their limousine, they were approached by several people seeking autographs, among them, Mark David Chapman. It was common for fans to wait outside the Dakota to see Lennon and get his autograph. Chapman, a 25-year-old hospital worker from Honolulu, Hawaii, had first come to New York to kill Lennon in November but changed his mind and returned home. He silently handed Lennon a copy of Double Fantasy, and Lennon obliged with an autograph. After signing the album Lennon politely asked him, "Is this all you want?" Chapman nodded in agreement. Photographer and Lennon fan Paul Goresh snapped a photo of the encounter.

The Lennons spent several hours at the Record Plant studio before returning to the Dakota at about 10:50 p.m. Lennon decided against eating out so he could be home in time to say goodnight to five-year-old son Sean before he went to sleep and because Lennon liked to oblige any fans with autographs or pictures that had been waiting a long time to see him outside his home. They exited their limousine on 72nd Street, even though the car could have been driven into the more secure courtyard.

The Dakota's doorman, Jose Perdomo, and a cab driver saw Chapman standing in the shadows by the archway. Ono walked ahead of Lennon and into the reception area. As Lennon passed by, Chapman fired five hollow-point bullets at Lennon from a Charter Arms .38 Special revolver. Numerous radio, television, and newspaper reports claimed at the time that, before firing, Chapman called out "Mr. Lennon" and dropped into a "combat stance", but this is not stated in court hearings or witness interviews. Chapman has said he did not remember calling out Lennon's name before he shot him. One shot missed, passing over Lennon's head and hitting a window of the Dakota building. However, two shots struck Lennon in the left side of his back and two more penetrated his left shoulder. All four bullets inflicted severe gunshot wounds, with at least one of them piercing Lennon's aorta. Lennon staggered up five steps to the security/reception area, said, "I'm shot," and collapsed. Concierge Jay Hastings covered Lennon with his uniform, and removed his glasses; he then summoned the police.

Outside, doorman Perdomo shook the gun out of Chapman's hand then kicked it across the sidewalk. Chapman then removed his coat and hat in preparation for the police arrival to show he was not carrying any concealed weapons and sat down on the sidewalk. Doorman Perdomo shouted at Chapman, "Do you know what you've done?", to which Chapman calmly replied, "Yes, I just shot John Lennon." The first policemen to arrive were Steve Spiro and Peter Cullen, who were at 72nd Street and Broadway when they heard a report of shots fired at the Dakota. The officers found Chapman sitting "very calmly" on the sidewalk. They reported that Chapman had dropped the revolver to the ground, and was holding a paperback book, J.D. Salinger's The Catcher in the Rye. Chapman had scribbled a message on the book's inside front cover: "To Holden Caulfield. From Holden Caulfield. This is my statement." He would later claim that his life mirrored that of Holden Caulfield, the protagonist of the book.

The second team, Officers Bill Gamble and James Moran, arrived a few minutes later. They immediately carried Lennon into their squad car and rushed him to Roosevelt Hospital. Officer Moran said they placed Lennon on the back seat. Moran asked, "Do you know who you are?" There are conflicting accounts on what happened next. In one account, Lennon nodded slightly and tried to speak, but could only manage to make a gurgling sound, and lost consciousness shortly thereafter.

Dr. Stephan Lynn received Lennon in the emergency room at Roosevelt Hospital. When Lennon arrived he had no pulse and wasn't breathing. Dr. Lynn and two other doctors worked for 20 minutes, opening Lennon's chest and attempting manual heart massage to restore circulation, but the damage to the blood vessels around the heart was too great. Lennon was pronounced dead on arrival in the emergency room at the Roosevelt Hospital at 11:15 p.m. by Dr. Lynn. The cause of death was reported as hypovolemic shock, caused by the loss of more than 80% of blood volume. Dr. Elliott M. Gross, the Chief Medical Examiner, said that no one could have lived more than a few minutes with such multiple bullet injuries. As Lennon was shot four times with hollow-point bullets, which expand upon entering the target and severely disrupt more tissue as they travel through the target, Lennon's affected organs were virtually destroyed upon impact. Ono, crying "Oh no, no, no, no... tell me it's not true," was taken to Roosevelt Hospital and led away in shock after she learned that her husband was dead. The following day, Ono issued a statement: "There is no funeral for John. John loved and prayed for the human race. Please do the same for him. Love, Yoko and Sean."

John Winston Ono Lennon, MBE (9 October 1940 – 8 December 1980) was an English rock musician, singer, songwriter, and peace activist who gained worldwide fame as one of the founding members of The Beatles. With Paul McCartney, Lennon formed one of the most influential and successful songwriting partnerships of the 20th century and "wrote some of the most popular music in rock and roll history". He is ranked the second most successful songwriter in UK singles chart history after McCartney.

Lennon revealed a rebellious nature, and biting wit, in his music, on film, in books, and at press conferences and interviews. He was controversial through his work as a peace activist and artist. After The Beatles, Lennon enjoyed a successful solo career with such acclaimed albums as John Lennon/Plastic Ono Band and Imagine and iconic songs such as "Give Peace a Chance" and "Imagine". After a self-imposed "retirement" from 1976 to 1980, Lennon reemerged with a comeback album, Double Fantasy, but was murdered less than one month after its release. The album would go on to win the 1981 Grammy Award for Album of the Year. 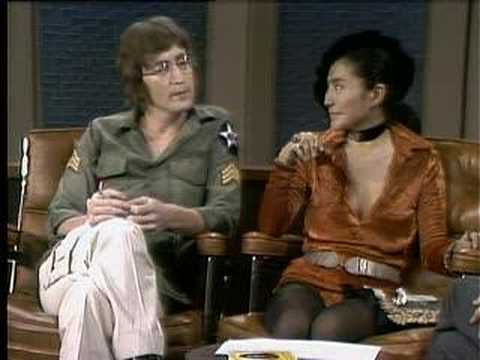