Ball carriers can get pigeonholed as musclers or runabouts, not Rogers.

S.C. backfield coach Bob Brown called him the ideal mix of bigness and quickness. New Orleans Saints coach Bum Phillips, who made Rogers the top NFL '81 draft choice, also noted the running back's double edge - Rogers could dodge a defender or run over him. At tailback for the S.C. Gamecocks, Rogers rolled up 21 consecutive wins and led the nation in rushing with 1,781 yards and tied for third in TDs with 14. On top of these great statistics, Rogers set an example in perseverance. There was a time in his youth when he couldn't afford the $2 insurance fee needed to play. Uneasy about contact when he started high school ball, he changed into a skilled hitter. When the 1980 season opened, he was a Heisman long shot, but when the voting was over he led decisively. In his first NFL season, he was one of the league's leading ground-gainers. George played with the Washington Redskins, Super Bowl Champions.

George was elected to the National Football Foundation and College Hall of Fame in 1997.

George Rogers of South Carolina and Hugh Green of Pittsburgh waged a furious battle for the Heisman, with Rogers getting 216 first place votes to 179 for Green. Green's first place votes and his points total were the highest ever gained by a lineman. Third place finisher Herschel Walker of Georgia had the highest point total ever recorded by a freshman.

George Washington Rogers (born December 8, 1958 in Duluth, Georgia) is a former American football player who achieved distinction in both the college and professional ranks as a running back.

Rogers was highly recruited out of high school, and decided to attend the University of South Carolina when coach Jim Carlen told him that he could play in his freshman year. Due to his large size, he seemed destined to play fullback rather than tailback. However, the Gamecocks had two running backs who graduated at the same time, so he began his college career as the starting tailback midway through his freshman season.
Rogers rushed for 1,006 yards (playing in only eight games) during his sophomore year, despite splitting time with fellow sophomore Johnnie Wright. However, it was Rogers' junior campaign that launched him into the national spotlight, as he was one of the best rushers in the country with 1,681 yards.
After that season, Rogers was given Second Team All-America Honors by the Associated Press, National Editorial Alliance, United Press International, American Football Coaches, and Football News.
In 1980, the stage was set when the Gamecocks returned plenty of talent, which was headlined by senior and Heisman candidate Rogers. While South Carolina's 8-3 record was good, Rogers' final season was better. His 1,781 yards was the best in the nation and earned him a spot as a finalist for the Heisman Trophy.
The Downtown Athletic Club in New York City named Rogers as the winner of the 1980 Heisman Trophy. Rogers beat out an impressive group of players, including Pittsburgh defensive lineman Hugh Green and Georgia running back Herschel Walker. Rogers also earned spots on eight All-America teams, all First Team honors.
Rogers had his number "38" retired during halftime ceremonies at South Carolina's final 1980 home game. He was the first University of South Carolina player to have his jersey retired while still active at the school.
Rogers left the Gamecock football program as its most successful running back, and many of his records remain after all these years. His 5,204 yards is still the highest career total by any Gamecock running back, and his 31 rushing touchdowns is tied with Harold Green for first. He is second on the all-time points scored list with 202. He also gained more than 100 yards in each of his final 22 college games.

During his four years as a running back at the University of South Carolina, Rogers gained 5,204 rushing yards. He rushed for 1,894 yards in 1980, his senior year, when he was a consensus All-American and winner of the Heisman Trophy as the nation's best college football player.
The 6-foot-2, 224-pound Rogers joined the NFL's New Orleans Saints in 1981 with a five-year contract reportedly worth $1 million. He was named rookie of the year after leading the league with 1,674 yards in 378 attempts, a 4.4 average, and scoring 13 rushing touchdowns.

Rogers entered a drug rehabilitation program early in 1982 but came back to gain 535 yards in 9 games during the season, which was shortened by a player strike. He gained 1,144 yards in 1983 and 914 yards in 1984 and was then traded to the Washington Redskins.
As the single running back in Washington's one-back offense, Rogers had two more seasons with more than 1,000 yards and he led the NFL with 18 touchdowns in 1986. A toe injury cut his playing time in 1987 and he retired after that season.
In his 8 NFL seasons, Rogers gained 7,176 yards on 1,692 attempts, a 4.2 average, and scored 54 rushing touchdowns. He also caught 55 passes for 366 yards, a 6.7 average. 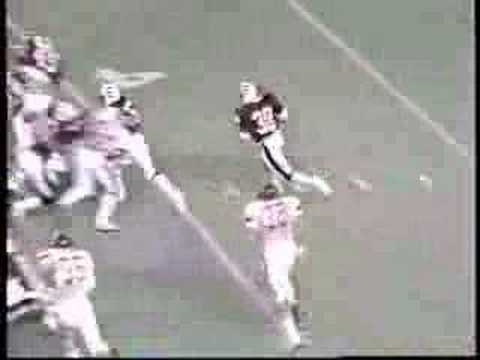 View other events that happened on December 11